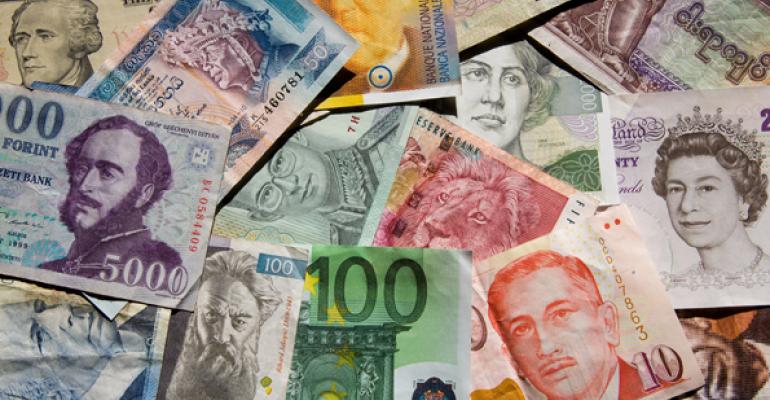 Foreign Buyers of U.S. Assets Show No Signs of Slowing Down

Foreign real estate investors went on a buying binge last year, acquiring a record $91.1 billion in properties in the U.S.—more than double the amount spent in 2014, according to New York City-based research firm Real Capital Analytics (RCA). Despite some global headwinds, that momentum is expected to stay strong in 2016 as investors continue to expand their acquisition activity across property types and into more secondary markets. Just this week, for example, Chinese insurer made a $6.5 billion deal for the acquisition of Strategic Resorts & Hotels and put in a $13 billion bid for Starwood Hotels & Resorts Worldwide.

“Foreign capital is still looking at the same positives in the U.S. that they saw last year,” says Jeanette Rice, head of investment research, Americas, for real estate services firm CBRE. Although the term “safe haven” does tend to get over-used, U.S. real estate is an attractive place to park money for capital preservation and an opportunity to create yield, Rice notes. The U.S. economy is outperforming most other regions with expected GDP growth of 2.2 to 2.3 percent in 2016. In addition, property values and property fundamentals stateside remain favorable.

Canada has been one of the dominant sources of foreign capital coming into the United States. Although the country has been slightly impacted by the oil crisis, Canadian investors’ appetite for real estate is expected to remain strong as they have a lot of capital to invest and fewer opportunities in their domestic real estate market. The U.S. is also likely to see steady inflows from Europe, Korea and Singapore, and there may even be an uptick in investment from Japan and Australia as more buyers look outside of their home countries for investment opportunities, says Riaz Cassum, a senior managing director and co-head of the global capital team at mortgage banking firm HFF. 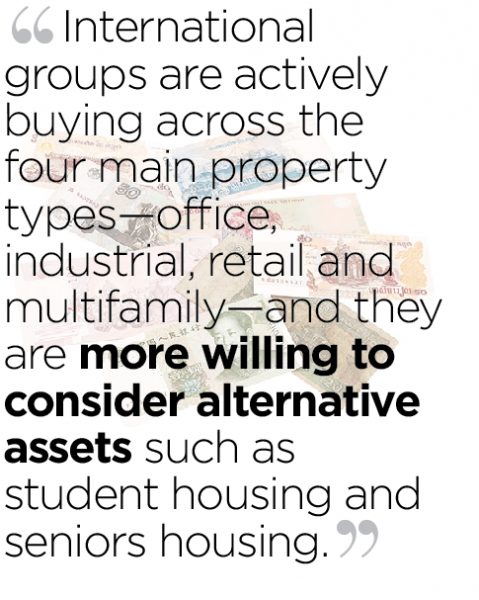 Chinese capital continues to be a formidable force in the U.S. real estate market. “We are seeing more capital coming out of China,” Cassum says. Slowing growth in China and the decline in value of the Chinese RMB is a greater motivating factor for more investors to seek alternatives outside of their home country. One potential problem for Chinese investors is if their government puts controls in place to make it more difficult for capital to leave the country, according to Cassum.

Latin American investors, on the other hand, may be less active in the coming year due to some currency challenges and slower economic growth, notably in Brazil and Chile. Middle Eastern investors, including sovereign wealth funds, have been impacted by the drop in oil prices and high deficits they now have to fund at home. However, while the large sovereign funds from the Middle East may not have new capital, they do already have significant investment holdings in the U.S. that are generating income or proceeds from property sales. “So the expectation with the big sovereigns is that they will stay active, but are likely to have less new capital allocated to real estate in the U.S.,” according to Cassum.

Another factor that could serve to drive more foreign capital to the U.S. this year involves changes to the U.S. Foreign Investment in Real Property Tax Act (FIRPTA). One of the changes involves the lifting of a tax penalty for pension funds. “So we do expect more interest from those qualified pension funds in U.S. real estate. It just has made real estate cheaper in a way due to fewer taxes,” says Rice.

Historically, the primary focus of foreign investors’ acquisition activity has been core office properties in gateway markets. “That has broadened dramatically in the past two to three years,” says Dan Cashdan, president of HFF Securities and and co-head of HFF’s global capital team. International groups are actively buying across the four main property types—office, industrial, retail and multifamily—and they are more willing to consider alternative assets such as student housing and seniors housing, Cashdan notes.

For example, HFF has brokered a number of joint venture development deals where foreign investors have partnered with U.S. apartment builders in cities such as Orlando, Dallas and Seattle. “We see continued interest in multifamily development and, in addition to that, we see interest in value-add, income-oriented opportunities outside of the gateway markets,” says Cashdan. Asian investors in particular are looking outside of the gateway markets for opportunities that can give them slightly more yield. Some are hoping to take advantage of weakness in the energy sector by going after buying opportunities in markets such as Houston and Denver, he adds.

Like RCA, research firm CoStar also reported that foreign investment sales more than doubled in 2015, although it provided a lower volume than RCA, at $69.4 billion. Of that amount, office investments represented the lion’s share of the acquisition volume at $23.9 billion. However, buyers have been more active across the board. Industrial assets saw a big spike in total sales to $18 billion, largely due to the IndCor portfolio sale. Foreign buyers also spent $9.9 billion on multifamily properties, $8.0 billion on hospitality assets and $6.8 billion on retail properties, according to CoStar.

Some investment groups, notably the Canadians, have been investing outside of U.S. gateway markets for a long time. Although other foreign investors still tend to prefer gateway cities that capital is increasingly branching out to other metros. According to CoStar, the top three metros in 2015 by acquisition volume were New York City, Washington, D.C. and Boston. However, the top 10 also included smaller metros such as Atlanta, Houston and Seattle.

It remains to be seen whether foreign investment will be able to exceed the high volume of buying that occurred in 2015, but so far, that activity doesn’t seem to be slowing down, says Cassum. Although there are some geopolitical, economic and currency issues that might create hiccups for some countries, many of the same factors that have been driving foreign investment into the U.S. are still very much in play, he notes.