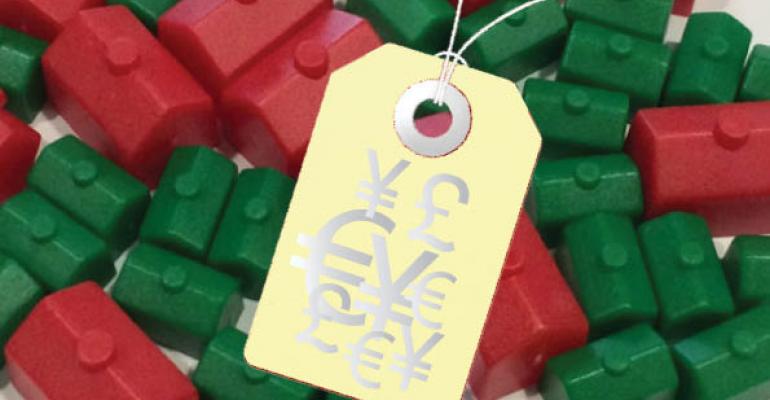 The wave of foreign capital flowing into U.S. real estate is poised for a record-setting year.

“We have strong inbound capital that we believe will see the U.S. exceed the previous peak of 2007 by year-end,” says Lucy Fletcher, vice president of international capital group and capital markets with real estate services firm JLL. As of mid-year, JLL estimates total cross-border investment in U.S. property at $24.1 billion, compared to the $23.6 billion recorded during the full year of 2014. The JLL data is based on transactions greater than $5 million and excludes hotels and some multi-family development.

Research firm The CoStar Group estimates the volume of foreign investment transactions during the first half of the year at an even higher level of nearly $39 billion, while Real Capital Analytics (RCA) data shows foreign buyers have purchased some $71.6 billion in U.S. commercial and multi-family real estate in the past 12 months. That data certainly shows that the U.S. continues to be a prime target for foreign capital. In fact, cross-border investors accounted for 24 percent of all investment sales in the U.S. in the second quarter, according to JLL.

There are a number of factors that are fueling foreign investor interest. Chief among them are the strength of the U.S. economy, attractive spreads, the low interest rate environment and the liquidity and transparency that the U.S. offers relative to other global markets. Many foreign investors have large amounts of capital to get out the door and are doing so through very large scale transactions, says Fletcher.

Globally, the Chinese are one of the most active sources of capital. According to JLL, Chinese investors led the way with $1.9 billion in acquisitions during the second quarter, followed by investors from South Korea at $700 million, the United Arab Emirates at $600 million and Canada at $500 million. Foreign capital is coming from a variety of countries. However, there is a definite uptick in interest from China. “We can’t ignore it. That wall of capital that we all talk about is real, and it is here,” says Fletcher.

Capital coming from China has the potential to have an even bigger impact on the U.S. real estate investment market going forward. According to commercial real estate services firm CBRE, Chinese outbound capital flows into global commercial real estate markets have exceeded $10 billion in a year for the first time ever. And that could very well be just the “tip of the iceberg” for investment capital coming out of China and looking to flow into real estate, says Dr. Henry Chin, head of research for CBRE APAC in Hong Kong.

Over the past four years annual China-sourced outbound flows to commercial real estate experienced a compound annual growth rate of approximately 72 percent, according to CBRE. The top three markets for those investment dollars include the U.S., the U.K. and Australia.

Traditionally, it has not been easy for Chinese national companies to invest overseas due to the regulatory restrictions from the Chinese government, says Chin. Two years ago, the Chinese government lifted the ban and relaxed the law regarding overseas investment. That opened the door for institutional investors to buy real estate globally. As it relates to the U.S. in particular, Chinese investors like the transparency, the liquidity of the market and the economic growth, adds Chin.

In addition to the increase in foreign dollars flowing into U.S. commercial real estate, investors are also tweaking strategies. “I think this year we have seen a real structural shift into other asset classes,” says Fletcher. During 2013 and 2014, more than half of foreign capital was invested in office properties. As of mid-year 2015 that number has dropped to 40 percent, with a massive uptick in investment in industrial and logistics properties.

To some extent, a few very large industrial portfolio sales have skewed those numbers. But there is definitely more interest in the industrial sector, says Fletcher. It’s partly due to the positive impact that e-commerce has had on the industrial market, she adds.

Chinese investors, for example, have been largely focused on buying office, hotel and condo properties in major gateway markets. However, Chin expects that focus to broaden to other geographic markets, as well as other property types, such as industrial and retail. That shift is likely to be led by the more experienced investors, such as the sovereign wealth funds. “However, I don’t think that will be the priority for other investors, such as the insurance companies and the developers,” Chin notes.

Overall, the increase in foreign capital is upping the stakes in an already highly competitive market. There is still a lot of frustrated capital not being placed in deals, according to Fletcher. JLL recently worked on a large transaction in a U.S. gateway market where 20 investors were chasing the same acquisition. “While we continue to see strength in the market, I think we will continue to see capital flow in,” says Fletcher. “We’re certainly not forecasting any let up for the back-end of this year.”