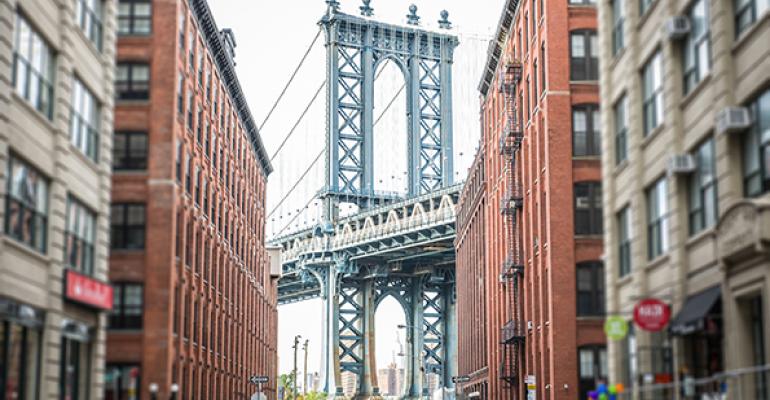 Brooklyn has been outshining Manhattan on the multifamily front for a while, and it’s looking like the next step for Brooklyn could be as latest office hot spot, as well. Yes, you heard right… After all, Brooklyn already got the prospective employees living in the borough—now it just needs the workplaces to which they would be able to easily commute. If this does materialize, certain lenders, from J.P. Morgan to New York Community Bank, seem particularly well-positioned to get involved.

Consider which lenders could benefit—J.P. Morgan, New York Community Bank and Signature Bank, as well as Banco Popular North America (BPNA). BPNA is one of the lenders that has issued loans to buildings surrounding downtown Brooklyn’s 420 Albee Square, an office tower that is reportedly due to start construction next year and is slated to become Brooklyn’s tallest building once it’s completed in 2018.

Albee Square is one example of the incipient office boom that already appears to have started happening in Brooklyn. Brokers say about 16 million sq. ft. of office space are under construction or planned between Williamsburg and Sunset Park, including downtown Brooklyn, the New York Times recently reported.

The city’s involvement could have a significant impact on office growth in the borough, just as the Bloomberg administration got the ball rolling on the redevelopment of the Hudson Yards in Manhattan.

In Brooklyn, tax credits could translate into cheaper rents offered by the city’s Relocation and Employment Assistance Program for some companies that move from Manhattan to Brooklyn, the New York Times noted. The program offers an annual credit of up to $3,000 for 12 years for every employee who moves.

Last year JEMB bought the vacant parking lot where the building is due to go up, planning to build an apartment building with some commercial space. The change was prompted by the city, when the Economic Development Corp. sold JEMB 120,000 sq. ft. of air rights to adjacent city-owned property to sweeten its efforts to have the building be an office tower rather than another apartment building, local media reported.

Lenders on adjacent properties include BPNA, the community bank that issued a $3 million loan to Chera Realty & Development for neighboring retail property 255 Duffield St. (also called 523 Fulton St. and cross-collateralized with another Fulton Street property) back in 2006, the same year the property was renovated. Once the office tower goes up, nearby retail could, of course, see a boost from lunchtime or after-work shoppers.

Might BPNA get into the Brooklyn office market as well? It’s possible. Last year the bank issued loans for Brooklyn offices including $9.25 million in loans for 3043 Ocean Ave., a medical office building in Sheepshead Bay, and a $5.1 million loan for 1810 Voorhies Ave. in the same neighborhood. Other lenders that might help fund a potential Brooklyn office boom include:

In terms of number of loans, J.P. Morgan was the top office lender in New York City as a whole in the first half of this year, issuing $3.2 billion in loans for properties in the city in that time period. This figure includes a $196.98 million loan for 2 Grand Central Tower. In Brooklyn last year, J.P. Morgan issued a $142 million loan (through two CMBS deals) for a class-A 10-story office building at 470 Vanderbilt Avenue, near the Barclays Center. This multi-strategy bank is involved in a wide spectrum of loan sizes. It also issued a much smaller $2.56 million office loan for 1797 Pitkin Avenue, a former bank building on the corner of Pitkin and Mother Gaston Boulevard in Brownsville, as well as small-scale office loans in Queens.

New York Community was the biggest New York City lender in the first half of this year measured by loan amounts, having issued $3.2 billion in loans. It’s also the second-largest lender measured by the number of loans made this year, many of which on properties in Brooklyn. Some of those loans include a $27.5 million loan for 77 Commercial St., part of a new housing development and some retail on the Greenpoint waterfront. New York Community also issued a $25 million loan for what used to be known as the “Waldorf Astoria of Brooklyn”—the landmark Hotel Bossert at 98 Montague St., the place where the Brooklyn Dodgers reportedly celebrated their only World Series win 60 years ago (and a street popular with other lenders as well)—and a $20 million loan for 100 Parkside Ave., now known as 123 on the Park, a former hospital on the south side of Prospect Park that has been converted into an apartment building.

This local lender is familiar with the Brooklyn lending scene, though many of its loans have been for multifamily buildings. On the office side, it issued a $12 million loan for 186 Montague St., on the main shopping street in the historic Brooklyn Heights neighborhood. It has also issued office loans in Queens, the Bronx and Manhattan, including a $60 million loan for 920 Broadway in the Flatiron district.

Another local lender, Apple Bank also issued a loan for a Montague Street office building this year: $14 million for 181 Montague St., just outside the historic district. Also this year, Apple Bank issued several loans for multifamily properties in Flatbush, as well as for Manhattan office buildings such as 894 Broadway (for which it issued a $10 million loan) and 56 W. 45th St. (a $6 million loan).

Dreaming big, if the Brooklyn office trend becomes big enough, it might attract the attention of trophy hunters from outside the U.S. like Deutsche Bank, which was behind the $1 billion loan for the Crown Building at 730 Fifth Ave., one of the biggest loans in Manhattan this year.

If the office trend keeps growing in Brooklyn, those who live in and continue to move to the increasingly trendy borough may find themselves with less and less reason to leave it.