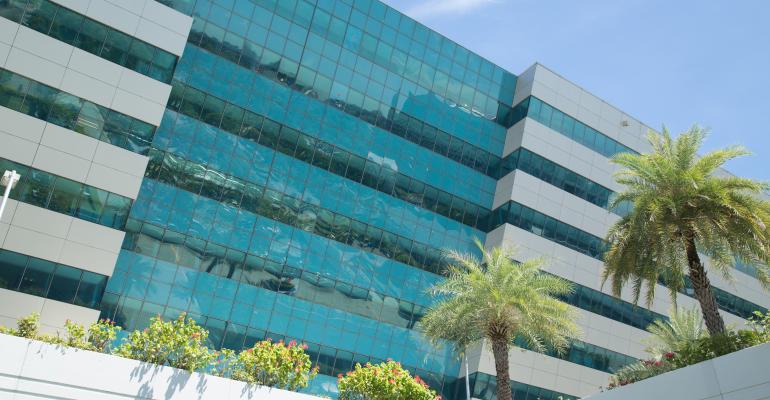 As the Market for Office Assets Cools Down, Suburban Buildings Outperform CBD Properties

Transaction volume in the sector totaled $28.7 billion during the third quarter, marking an 18 percent year-over-year decline.

Investment sales in the office sector continued to decline in the third quarter, according to a recent report from New York City-based research firm Real Capital Analytics (RCA). Transaction volume in the sector totaled $28.7 billion during the quarter, marking an 18 percent year-over-year decline. Sales of office assets in central business districts (CBDs) declined by 49 percent during the period, while sales of suburban office buildings increased by 4 percent.

With this market cycle winding down, researchers at real estate services firm Colliers International expect transaction volume to continue to trend down through the rest of the year, with moderate appreciation in values, according a 2017 Capital Flows Midyear Update.

“Were in the last part of cycle and property returns have been historically high,” says Colliers Chief Economist Andrew Nelson.

Prices on office assets in the third quarter increased by 5.1 percent, according to RCA. Continuing price escalation is the result of moderate construction and high investor interest in this sector, despite moderating demand for office space over the last few years due to changes in the workplace environment. With employers offering telecommuting and other flexible work options, space per new employee has dropped in half over the past few years, Nelson says.

With prices now at record highs, “there’s pullback by investors and the investor pool shrinks,” Nelson says. “We’re in the late stages of the cycle, so now is generally not the time to take a risk on an empty office building, hoping the market will return.”

With high pricing and high barriers to entry in the top U.S. markets, investor interest is shifting away from primary cities to secondary cities with robust technology sectors and suburban submarkets with walkable environments.

However, gateway markets, including New York, Los Angeles and Washington, D.C., still dominate in terms of sales volumes and remain at the top of JLL’s investment intensity list. Despite a 53 percent drop in deal volume year-to- date, Manhattan remains the most liquid office market, with $9 billion in sales so far this year and another $3.7 billion under contract waiting to close, RCA reports. Other large markets posting double-digit declines in sales volume include San Francisco, Seattle, Chicago and Northern New Jersey.

While this pullback may reflect investor aversion to high prices in these markets, deal volume in Los Angeles and Boston remains robust. Additionally, Washington, D.C. posted an 83 percent increase in sales in the third quarter, mostly due to Government Properties Income Trust’s buyout of First Potomac Realty.

Foreign investors may be driving this trend. They are most familiar with gateway U.S. cities and tend to hold assets for long periods, so historically have invested in trophy or premium assets in New York, San Francisco, Los Angeles, Chicago and Washington, according to Nelson. That being said, “Foreign investors chasing higher yields are now dipping their toe into secondary markets like Seattle, Austin, San Diego, South Florida and Atlanta,” he notes. These investors are becoming knowledgeable about specific secondary markets and are becoming more comfortable investing outside of core CBD’s.

Despite continuing price appreciation, Nelson sees no signs of the cycle coming to a disastrous conclusion like in 2009.  Rather, the market is likely to remain healthy because lenders have shown discipline this time around, he says.

Additionally, reversionary cap rates—the cap rate used to figure the financial benefit an investor expects to gain upon exiting an investment—have increased, he says. “In general, investors are more disciplined than in last cycle.”