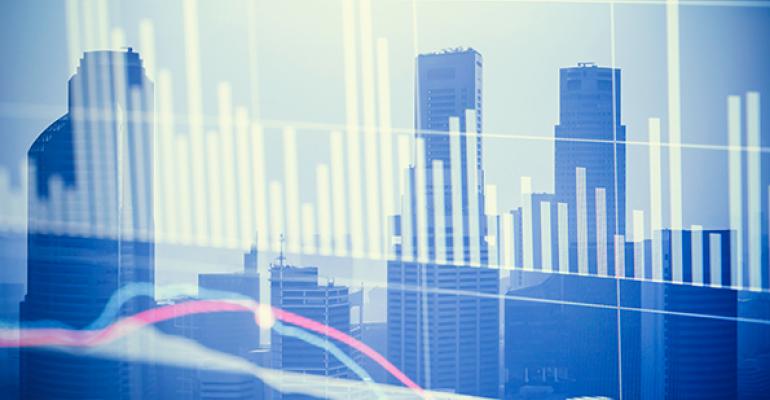 Pension funds are continuing to rein in expectations for commercial real estate investment performance. In the second-quarter 2016 Consensus Survey Forecast, total returns declined to 8.4 percent across all property types, followed by an expected further slide to 6.8 percent in 2017 and 5.7 percent in 2018, according to the Pension Real Estate Association (PREA).

Pension fund expectations on performance have been moving lower over the past year.

Compared to the second-quarter 2015 survey, the outlook for 2016 dropped only a slight 20 basis points. However, pension funds are far less optimistic about performance beyond 2016. The current survey shows that the total return forecast for all property types from 2016 to 2020 is at 6.7 percent per year, which is down compared to a year ago, when respondents predicted a five-year growth rate of 8.0 percent annually. Survey respondents forecast real estate returns as represented by the NCREIF Property Index (NPI).

Specifically, pension funds are more pessimistic on the outlook for property value appreciation. The forecast for appreciation returns is 3.5 percent in 2016, followed by 1.8 percent in 2017 and 0.7 percent in 2018. Appreciation has been driving the returns over the last three years, while rents have remained relatively stable. So it is no surprise that pension funds are anticipating lower total returns in the future, says John D’Amico, senior managing director and head of client services at Trimont Real Estate Advisors, a global real estate financial services provider based in Atlanta.

Given where we are in the cycle, pension funds are beginning to focus on more defensive assets, says Will McIntosh, global head of research for USAA Real Estate Co., which provides co-investment asset management services for pension funds. There is a big focus on core assets, as well as assets that have a strong income component, such as industrial, multifamily and even some retail, says McIntosh.

“Multifamily is a classic example of how the market is gravitating towards more defensive and conservative investments,” adds McIntosh. Apartments, particularly institutional quality assets in core markets, are somewhat irreplaceable and can provide strong income even in a market that may be moving into the later stage of the cycle.

In March, USAA Real Estate acquired The Buchanan, a mixed-use property in Midtown Manhattan in a partnership with Madison Realty Capital. The 16-story, 300,000-sq.-ft. property includes 289 apartments and about 16,000 sq. ft. of retail and office space. The core asset also has a value-add component as the partners plan to initiate a comprehensive capital improvements program.

According to the PREA survey, pension funds are most positive on the outlook for industrial real estate, with total returns expected to reach 9.6 percent this year, before declining to 7.5 percent in 2017 and 6.7 percent in 2018. Pension funds are exhibiting more of an appetite for industrial assets. That is due to the fact that the fundamentals are strong; the consumer outlook is improving; and the rapid expansion of e-commerce is having a positive impact on the industrial market. “People are seeing that and trying to take advantage of the demand for this industrial warehouse space,” says McIntosh.

Respondents expect office to lag in performance, with a total return of 8.1 percent in 2016, followed by 6.5 percent and 5.4 percent respectively in 2017 and 2018. The office sector is perceived to be more risky and more volatile, notes McIntosh. Even though office employment has been increasing, remote workers and the increasing densification of office space has resulted in less demand for space, and some of the older stock that exists today is less desirable. “There is still demand. You just have to be careful and thoughtful about where you are investing and building this new office space,” he says.

Ultimately, capital is continuing to flow to U.S. real estate from both domestic and global pension funds. “They are finding real estate to be an investment that provides relatively attractive returns, given the return hurdles that they are trying to hit and looking at returns from alternatives on a risk-adjusted basis,” says D’Amico. The biggest challenge for fund managers in this environment is to be able to get that capital deployed in a reasonable fashion so that we can be successful in achieving the objectives of the investor. If that doesn’t happen, then I think we can expect to see capital flows to real estate start slowing.”