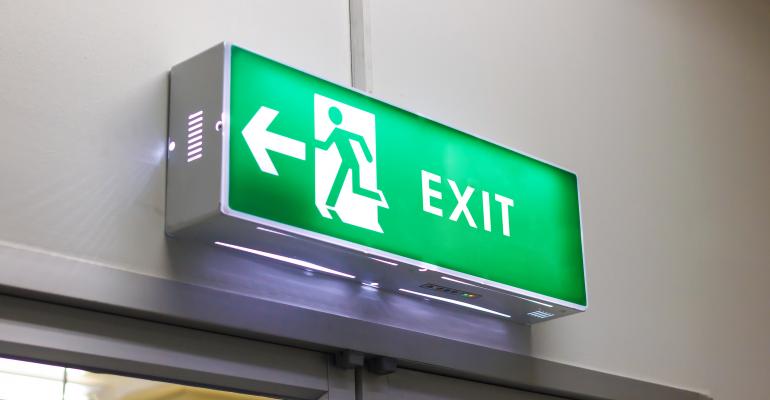 Private equity fund managers are taking advantage of high property valuations to close out funds and distribute record amounts of cash back to investors.

According to a new Q2 Trends Report released by the Private Equity Growth Capital Council (PEGCC), private equity quarterly exit volume was at its highest level on record at $125 billion for the second quarter of 2015. That was a surge of 79 percent over the $70 billion reported for the first quarter.

Second quarter was an anomaly in terms of exceptionally high exit volume, but it is following the upward trend that has existed for the last couple of years, says Bronwyn Bailey, PEGCC’s vice president of research. There was a slowdown in exits following the recession between 2009 and mid-2012. However, volumes have been growing since the end of 2012, she adds.

The main driver behind that rise in exit volumes is high valuations. “Equity markets are, in some instances, at their peak, which influences the valuations of companies held by private equity funds,” says Bailey. “So private equity managers are seeing this and deciding that it is a good time to sell and provide high returns for their investors.”

Although PEGCC tracks all private equity funds, real estate funds are following that larger trend. Data from London-based research firm Preqin shows that the amount of capital being distributed from real estate private equity funds has been accelerating since 2009. Capital distributions hit a record $187 billion in 2014, up about 36 percent compared to 2013 and nearly triple the $67 billion that was distributed in 2012, according to Preqin.

That surge in distributions is a combination of current market conditions, as well as a reflection of the successful fundraising that was done in 2006, 2007 and 2008. “So partly the distributions reflect the end of the cycle of those funds. But I think what is really driving it is the attractive exit opportunities,” says Andrew Moylan, head of real assets products at Preqin. Property valuations are higher and there is considerable competition on the acquisitions side, which has created more attractive opportunities to sell real estate and close out funds, he adds.

The overall trend of high exit volumes is expected to continue in the near term, at least through the remainder of 2015. “There are some that are expecting the Fed to increase interest rates, which doesn’t directly impact exits, but it can give the market some jitters,” says Bailey. As a result, there is the potential that higher interest rates could put a damper on exit volume. “But I don’t see anything directly that is suddenly going to reduce the volume or number of exits,” she says.

“I think there is still plenty of room for distributions to continue to go up,” adds Moylan. There was a considerable amount of money being invested in 2010-2012 that has to exit at some point.

“Managers will be thinking about how much longer prices will continue to go up and when is a good time to exit their investments,” he says.

Despite the capital being reinvested in private equity real estate funds, as well as new investment dollars coming in, it remains a fiercely competitive environment for fund managers. Preqin is currently tracking more than 400 global private equity real estate funds that are actively fundraising. The number of funds successfully closing has actually declined as some of the top managers tend to find more success in capturing investor capital, notes Moylan. “What you see is the Blackstones and Starwoods and Lone Stars of this world are hoovering up a lot of these investor commitments,” he says. 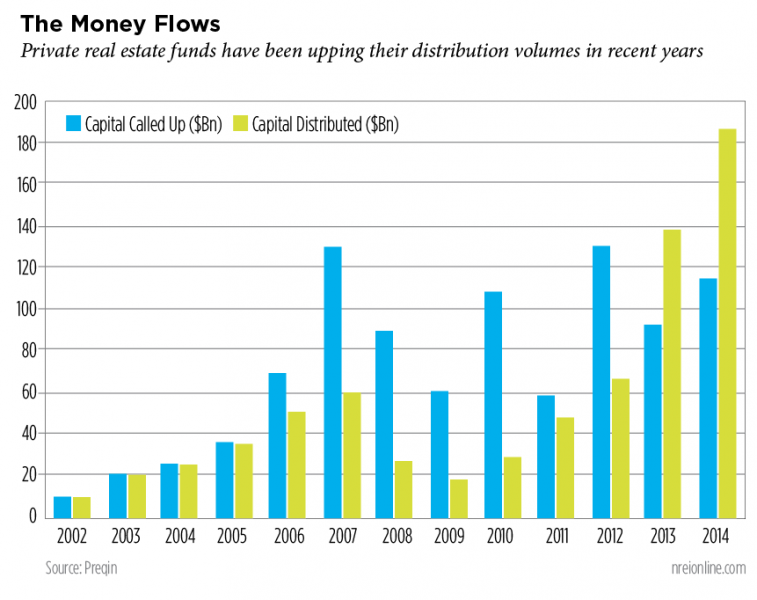