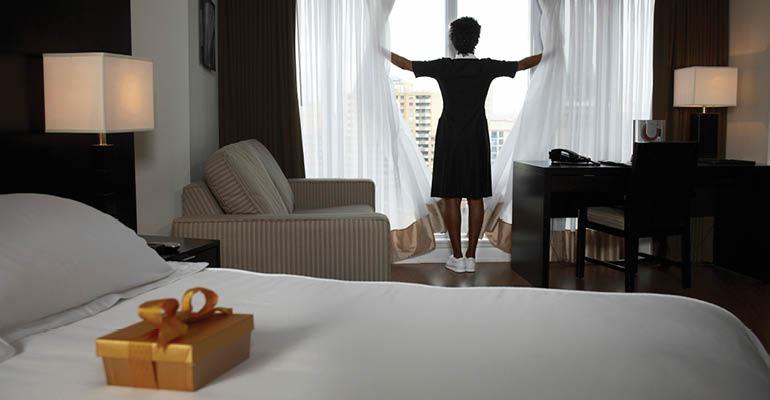 It is said that a rising tide lifts all boats, and this notion certainly rings true in the U.S. hospitality sector. The key difference this cycle is the growth of downside risks.

It is said that a rising tide lifts all boats, and this notion certainly rings true in the U.S. hospitality sector. Fundamentals remain healthy, with occupancies plateauing at cyclical highs above 65 percent, per STR, and room rates continuing to rise modestly. This has resulted in continued, albeit slower, revenue growth for hotel operators. That is an unsurprising reality, given the general correlation between hotel revenues and GDP growth and GDP’s continued slow expansion. The key difference this cycle is the growth of downside risks.

Hospitality fundamentals are currently buoyed by rising domestic consumer spending on hotels and motels, which continues to climb to new heights. This dovetails with shifting consumer spending habits, which are changing from traditional goods toward experiences.

However, almost every other fundamentals dynamic is a headwind for hotels. Foreign tourism has fallen 3.4 percent from its 2015 peak, and its outlook remains fraught. The dollar remains strong against the Euro and other currencies following its run-up around a year ago. Political machinations further reduce the country’s attractiveness as a tourist destination. Proposed travel bans from certain nations, potential changes in visa requirements and other factors all reduce the likelihood of travel to the US.

The foreign tourism issue is particularly acute for gateway markets like New York City, Miami and San Francisco, which draw a larger portion of hospitality demand from foreign tourism and are the epicenters for another headwind: supply expansion. While room supply has risen roughly 2 percent year-over-year on a national level, per STR, this masks significantly larger pipelines in these gateway markets, which are also grappling with declining business travel. The GBTA Business Travel Index fell in 2016, and while it projects a rise this year, the index looks to remain below its 2015 peak. With improved communications technologies and tech-savvy millennials becoming an increasing portion of the workforce, business travel growth may be further stunted in the coming years.

Additionally, hospitality is facing the secular disruptive threat of home-sharing sites such as Airbnb. Lobbying groups are fighting hard against these upstarts, winning concessions/enforcement provisions in places such as New York City, but they have won the battle—not the war. These growing competitors are here to stay, and are creating shadow supply over hotel markets that is particularly acute around events. This has reduced the spike in fundamentals operators used to experience, and will become a more persistent drag as these sites expand their focus to business travel.

Hospitality fundamentals remain healthy, buoyed by the robust labor market and expanding economy, but this cyclical tailwind remains the last pillar on which hospitality demand rests, as evidenced by the deceleration in revenues. An increasing number of variables are turning the tide on hospitality fundamentals. Hotel capital markets are beginning to grapple with this new paradigm, as deal volume has fallen amid widening bid/ask spreads, pricing has fallen from its peak according to the Ten-X Hospitality Nowcast, and cap rates have risen modestly from their lows. Valuations, however, are still rich, and the numerous risks that are building could place them in jeopardy. The juxtaposition of solid current operating conditions and the potential for a sharp decline has made transacting in the hotel space difficult, as buyers and sellers come to different perceptions on value.  n