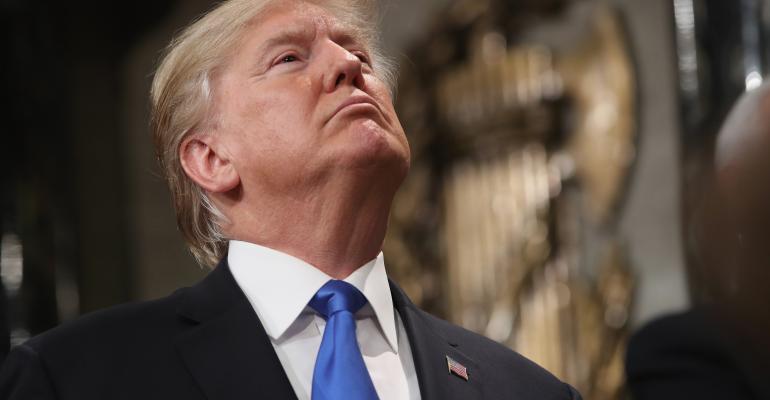 Trump said federal dollars should be leveraged by partnering with local and state governments. He also called on tapping into private sector investment.

During his first State of the Union address, President Donald Trump asked Congress to adopt a $1.5 trillion bill to fix America’s aging infrastructure. However, there were no details on how the plan, briefly mentioned during one of the longest of such addresses in history, could be enacted and how much of those funds would come from federal vs. private sources.

Trump said federal dollars should be leveraged by partnering with local and state governments. He also called on tapping into private sector investment. More capital has been flowing into government-leased facilities--from infrastructure projects to single-tenant commercial buildings--around the country from a bigger pool of investors. For example, Blackstone last year launched a infrastructure fund that it anticipates to grow to $100 billion.

“I am asking both parties to come together to give us the safe, fast, reliable and modern infrastructure our economy needs and our people deserve,” he said.

During the speech, Trump criticized the often long and complex permit approval processes for new projects, urging the streamlining of regulations and reducing the permitting timeline to one or two years. “We built the Empire State Building in just one year,” he said. “Isn’t it a disgrace that it can now take 10 years just to get a permit approved for a simple road?”

Though not discussed directly, the administration has offered at least $200 billion in federal funds for infrastructure projects over 10 years, which spurred criticism from top Democrats who argue that far more funds are needed, according to Bloomberg.

The administration is expected to release a full version of its infrastructure improvement plan in February, though the draft proposal includes providing incentives for local governments to build revenue streams for projects and expanding existing federal loan programs, CNBC reported. The draft proposal also touches on permitting reform, among other measures.

There may not be as much interest among commercial real estate executives to invest in infrastructure this year as previously, according to one recent survey. The 2018 Altus Group Real Confidence Executive Survey polled commercial real estate executives on overall investment sentiment, as well as in which segments they would invest a hypothetical $1 billion. The survey found that theoretical allocations to the infrastructure sector dropped to 7.3 percent in 2018 from 15.5 percent. This drop could stem from the sense among the executives polled that Trump’s administration has broken previous promises to take action on infrastructure issues, says Chuck DiRocco, director of research for the Altus Group, which provides real estate data.