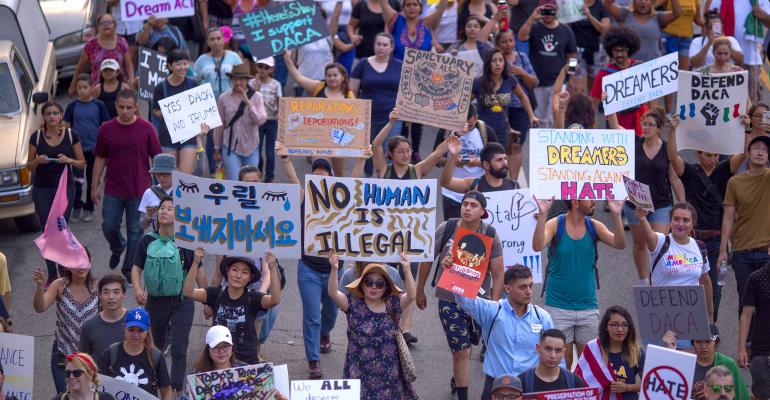 NREI interviewed several real estate experts on the implications of the policy.

President Donald Trump campaigned on the promise of reforming U.S. immigration policy. Last month, he announced his support for legislation, sponsored by Republicans, which would cut the amount of legal immigrants allowed into the U.S. in half over the next decade. The proposal, which still has to make its way through Congress, also calls for limits on the number of refugees allowed into the country and the creation of a point-based system for determining who can lawfully immigrate.

It could harm the labor market

Maintaining a steady flow of immigrants into the U.S. helps provide more workers for employers, according to the experts. Foreign-born workers represented 17 percent of U.S. private employment as of July—up from about 15 percent in February 2009.  Meanwhile, in about two years, there will be a decrease in native-born residents of working age, according to a recent Cushman & Wakefield report addressing the effects of the proposal on the industry. “We are an industry that disproportionately relies on this group as a work force,” says Revathi Greenwood, head of research, Americas, at Cushman & Wakefield. The report notes that immigrants make up the bulk of construction workers, for example, filling 25 percent of those positions. Even then, the construction industry faces a dearth of employees, particularly in the South, where immigration has played a key role in the construction labor force, says Ryan Severino, chief economist at commercial real estate services firm JLL. “We generally need more workers to build more things,” he notes.

Immigrants also make up a significant percentage of hotel workers, Severino says. If hotels have a hard time attracting employees, it makes labor more expensive and businesses more difficult to run, Severino notes. The office sector could also take a hit—many employers, including those in the tech sector, are clamoring for more H1-B visas, which allow them to hire foreign workers for certain jobs, Severino notes. If these companies have a hard time finding highly educated, specialized workers, the effect could extend to their office space needs, he says.

The business and management sectors have seen the most growth of workers who are foreign-born, compounding the effect immigration restrictions could have on the office sector, says Greenwood. About 3.5 million foreign-born residents work in those fields, according to the Cushman & Wakefield report.

Related to the immigration overhaul is the future of the EB-5 visa program, which allows foreign investors who invest in a business that employs at least 10 Americans to become permanent residents in the United States. The program, which has faced criticism, is awaiting permanent renewal. It’s a move that Marty Cummins, president of New Smyrna Beach, Fla.-based Florida EB-5 Investments LLC, which helps immigrants seeking permanent residency status through that program, supports. “The more investors we have, the more businesses will be funded by foreign investors,” he says. The election of Trump poses as a benefit to business and the economy, Cummins says. But he cautions against restricting legal immigration: “A rejection in EB-5 visas and a reduction of visas in general will probably hurt the American economy.”

Multifamily housing could take a hit

While a large portion of immigrants own homes, the rest are renters, Burley notes. “That affects the multifamily market pretty strongly,” Burley says. While class-A apartment vacancy rates have been rising over the past three to four years, class-C and class-B apartments—many of which are rented to newcomers to the country—have not, Severino notes. Any restriction on the number of immigrants, therefore, could have a dampening effect on that segment of the apartment market, Severino adds.

This impact might not only be seen in big cities like New York or San Francisco, which have traditionally attracted scores of immigrants. For example, Detroit saw a high percentage of its native-born population flee after the city went bankrupt, but immigrants from the Middle East have bolstered the economy and the real estate market there because of the cluster effect, Burley notes.

Immigrants made up around 28 percent of all household growth over the past two decades, according to a 2016 report from the Urban Land Institute (ULI). “Without sustained immigration, the housing market could weaken, and in many markets the impact could be dramatic,” the report states.

It could hurt the growth of cities and other communities

The native-born populations in Los Angeles and New York dropped between 1995 and 2015, according to the Cushman & Wakefield report. Over those two decades, population growth in gateway cities proved “highly dependent upon international immigration,” the report notes. In fact, in the top 10 U.S. cities, a third of the population are immigrants, and cities including Salt Lake, Indianapolis and El Paso, Texas can point to immigrants as leading the surge of their populations, notes Greenwood. A lot of the country’s GDP is driven by cities, which in turn are fueled by immigrant growth: “Cities are really kind of the engines of growth,” she says.

When immigrants come to America, they tend to live in established ethnic communities. Areas experiencing significant immigrant growth can see boosts not only in housing demand, but in other sectors, too, including retail and commercial businesses, according to the ULI.