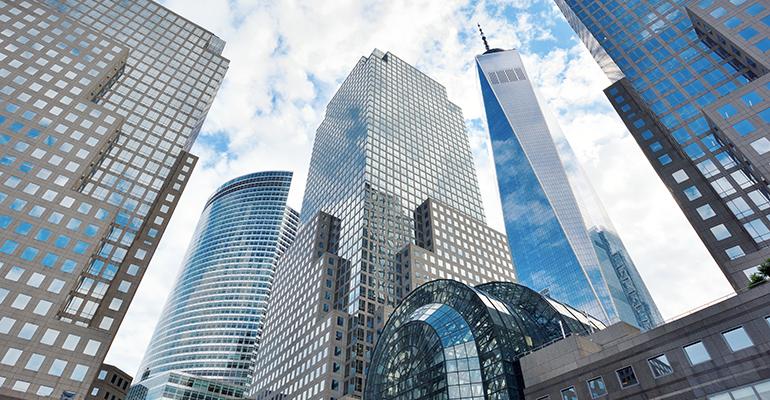 Why are these Big Apple lenders cutting back on their commercial real estate financing activity?

Local New York lender Signature Bank was the leading originator of commercial real estate loans in New York City in the second quarter of 2016, and its competitor, New York Community Bank, was No. 3. A year later, both lenders are still on CrediFi’s top 10 ranking, but they’ve dropped down to the bottom half, with Signature at No. 7 and NYCB at the bottom of the pack.

Why are these Big Apple lenders cutting back on their commercial real estate financing activity? And if they’re not dominating the financing sector, who is?

The decline in origination by local lenders is being driven in part by a drop in multifamily financing, following concern expressed by regulators over concentration risk.

In the first quarter of this year, multifamily origination shrank to $7.5 billion—the lowest in any quarter in the previous two years—before inching up to $9.6 billion in the second quarter, the analysis found. (Note that properties designated as multifamily may include condominiums and mixed-use properties that have a residential component.)

The Office of the Comptroller of the Currency warned last year that credit concentrations had increased in banks of all sizes, and pointed the finger at commercial real estate loans in general and multifamily loans in particular. The OCC continued to single out multifamily lending this year, saying that bank financial data from 2016 indicated growth in commercial real estate lending, “led by the multifamily housing sector and centered in the construction of luxury apartments primarily in the Northeastern and Western regions of the United States.” Growth in some banks, the report said, “has been accompanied by weaker underwriting standards and examiner-identified weaknesses in concentration risk management practices.”

At the same time, the Federal Reserve’s senior loan officer survey shows an increased share of banks reporting tightening standards for multifamily loans last year, an effect that, if accurate, can take several quarters to see in the loan data. The drop in multifamily lending in New York City in the second quarter may be a reflection of standards tightened last year. U.S. banks also reported that demand for commercial real estate loans weakened in the second quarter, the Federal Reserve said, though foreign banks reported strengthened demand.

NYCB appears to be keeping its assets below $50 billion to remain, for now at least, beneath the threshold for systemically important financial institutions, or SIFIs, which are subject to tighter oversight. CEO Joseph Ficalora said in the bank’s second quarter earnings call that NYCB considers a large merger transaction to be “the best way of transitioning to SIFI status” and that the bank expects to resume “meaningful balance sheet growth” in the second half of 2017.

Local New York City lenders may have slid down the list, but unlike insurance companies, at least they were still in CrediFi’s top 10 ranking for New York City this year.

Insurance providers were off the New York City top 10 in the first two quarters, even though several—including AIG, Prudential, French insurer AXA and MetLife (which did make the top 20)—were leading lenders in three quarterly rankings last year. It’s worth noting, however, that although insurance providers were conspicuously absent in New York City, MetLife and AXA were among the top 10 originators in Chicago in the first quarter, and insurance and pension companies played a prominent role in financing Boston’s commercial real estate market in the first half of this year.

Look a little further away from the Empire State and you’ll find Arkansas-based Bank of the Ozarks, which rose from No. 17 on the first quarter 2017 CrediFi Quarterly Ranking for New York City to No. 9—higher than NYCB. Bank of the Ozarks’ loan origination, which includes a relatively large proportion of construction lending, increased more than 100 percent quarter-over-quarter and nearly 50 percent year-over-year.

But the originators responsible for the bulk of New York City loan originations in the second quarter were U.S. national banks and foreign banks, which together were responsible for over three-quarters of the New York City commercial real estate loans originated by the top 20 lenders in our sample.

Deutsche Bank not only topped the list of foreign lenders, but was the top New York City originator in the second quarter, originating about $2 billion, with an 8 percent market share.

We’ll be keeping our eye on the Big Apple to see whether or not multifamily financing—and New York City’s largest local lenders—continue their slide during the rest of 2017.