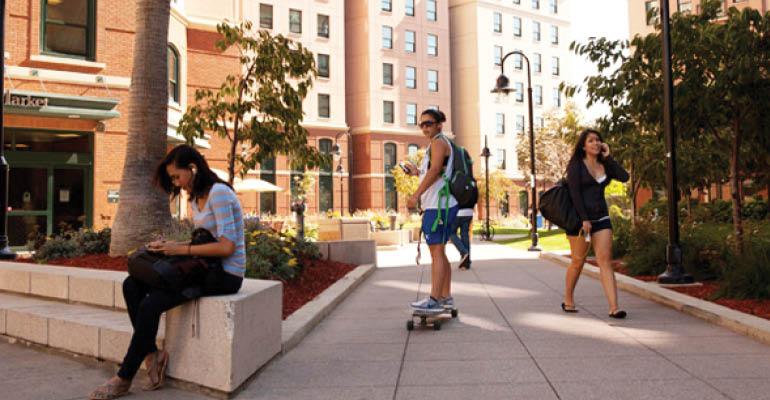 By Sean Kane and Michael A. Morrone

Investors are diversifying their portfolios beyond the familiar urban construction developments that have driven multifamily sale volumes to new heights over the past two years. One perhaps unexpected area of focus has cropped up: student housing.

As investor interest in student housing has increased, institutional capital has played a crucial role. Institutional investors accounted for nearly half of acquisitions in 2016.

Why is Student Housing Such a Good Bet?

Looking at the math, it’s clear why investors are enthusiastic about student housing. As millennials become the country’s largest living generation, university enrollment has shot up past 4.3 million.

National enrollment figures are expected to increase in both 2017 and 2018 compared to the current enrollment landscape, with the potential to add 100,000 or more students during that time frame. In addition to increasing enrollment, funding shortfalls across several states act as an additional driver of student housing solutions from the private sector.

With so many students, supply has a ways to go to match demand.

The current pipeline of new supply is concentrated in the Sunbelt. Four of the top five universities for forecasted deliveries are Florida State University, Texas A&M University, Texas Tech University and Arizona State University. Each of these schools have at least 4,000 beds in their respective pipelines, led by Florida State’s 7,900 beds. Annual effective rent growth has increased with new construction. Rents for privately owned student housing are expected to increase 2.9 percent in 2017. And that comes on the heels of a projected 2.9 percent gain in 2016 and a 3.6 percent gain in 2015.

Investing in the Investment of Human Capital

The tailwinds behind the market are strong, thanks in part to the evergreen emphasis on educational attainment. The numbers bare themselves out: In 2014, the median full-time worker over the age of 25 with a bachelor’s degree earned nearly 70.0 percent more than a similar worker with just a high school degree.

Consistent demand, stable net operating income and a favorable supply environment will continue to attract investors to student housing. College-age population growth and subsequent enrollments are expected to remain positive in coming years and balanced with larger labor market trends. However, there is reason to be cautious. As investor interest in the sector has increased, pricing has become competitive. Additionally, student housing affordability, the value of education and student debt have the potential to mute demand in some markets. Despite this, the underlying structure of the U.S. higher education system remains a leader globally, and alignment with best-in-class anchor institutions and local sponsors will remain critical to success.

Sean Kane is JLL’s national multifamily research manager. Michael A. Morrone is an investor research analyst with JLL. He has a Master’s in economics and policy analysis from DePaul University.