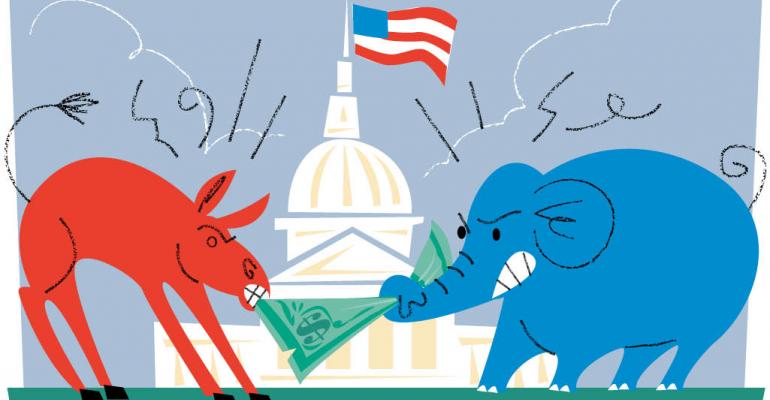 Will the Upcoming Election Affect Job Growth and/or the Real Estate Market?

As economists and forecasters, we frequently get asked how we model the upcoming election into our forecast. Apparently, there are some preconceived notions about presidents from one party having a better track record on the economy than the other.

A few media pundits have dug into the data to show that, in fact, that is not the case: employment growth has varied by president and no party can claim they are better at growing jobs. In all of these studies, the analysts looked at total employment as a gauge of how well the economy was managed.

But as real estate analysts, we are not only asked about the national economy, but Washington D.C.’s as well. The size of Washington’s workforce would likely reflect one party’s preference for a big government or a small government. Yet a look at federal government (public sector) statistics clearly shows that if one party does prefer a smaller government, it does not show in employment trends.

The chart above shows average annual private sector and federal government employment growth for each of the recent administrations. Although three of the earlier Democratic presidents (Kennedy, Johnson and Carter) added considerably to the government labor pool, the last two Democratic presidents (Clinton and Obama) shed government jobs, even as the economy expanded at a healthy pace. Likewise, federal government jobs grew considerably under Reagan, but shrank during the Bush I administration.

So what does this mean for the U.S. and Washington D.C. market outlook? Virtually nothing.

Our U.S. model incorporates a series of different variables into our forecast, including job growth, household formation, household income and new construction. In fact, Washington’s apartment market faces an increase in vacancy rates as development has surged. New construction should add more units to the market than demand will absorb, and this supply-demand imbalance will curb rent growth. In fact, rent growth in D.C. has trailed the U.S. over the last two years and will continue to do so.

Washington is not the only metro that faces a supply-demand imbalance. All but seven of the 82 metro markets that we survey show excess supply coming on-line in 2016, above what is forecasted to be absorbed. The national average apartment rent increased 4.7 percent in 2015, the highest increase since 2000, but rents are expected to grow at a slower rate going forward because of this excess supply.

Yes, there will be a new president taking office in January 2017, and the usual turnover in positions will occur as it does with every new administration. But this should not alter the national or local economy dramatically over the next few years. Nor should it change the dynamics of how the economy impacts the real estate market. Instead look to the jobs numbers as the best indicator of what’s ahead for real estate. Hopefully, it should stay the course that it has kept for the last few years.