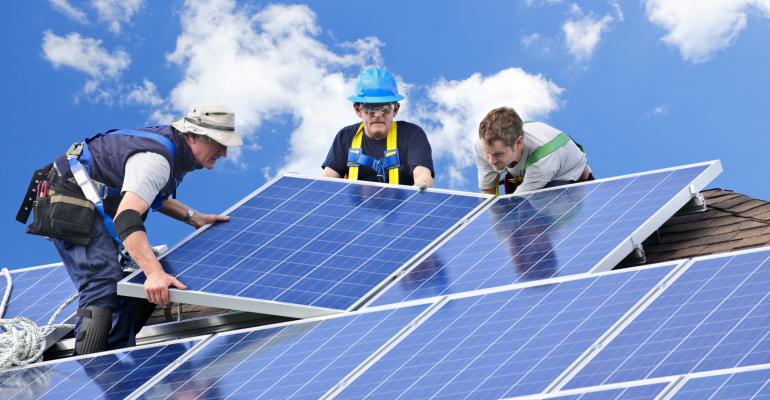 Solar Power Is Within Reach for Multifamily Owners, Developers

Solar power is becoming a much better investment for owners and developers of apartment properties. The price to buy solar panels has dropped significantly, and today’s photovoltaic panels are much more efficient than just a few years ago. Prices are now so low that a set of rooftop solar panels sometimes makes sense purely as an investment, without any extra cash from subsidy programs or tax credits.

“In many areas there is actually grid parity, meaning you could produce power at the same cost or better than what it costs to buy from the utility,” says Thomas Osdoba, vice president of green initiatives for Enterprise Community Partners Inc.

The economics of solar power have improved dramatically. A few years ago, utility companies sometimes refused to pay for the electricity that their customers produced with solar panels, making solar panels impossible to finance without a generous grant program. 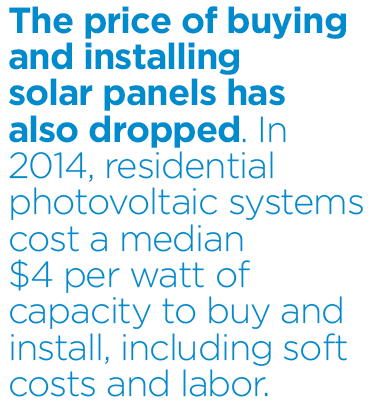 Today, utility companies tend to be more accommodating. “In many, many states, the utilities are directed or compelled to buy electricity if you produce the power,” says Osdoba.

The price of buying and installing solar panels has also dropped. In 2014, residential photovoltaic systems cost a median $4 per watt of capacity to buy and install, including soft costs and labor, according to the “Tracking the Sun” report from the Lawrence Berkeley National Laboratory. That’s down about 40 cents from 2013, and down from close to $10 from a decade before. However, although the technology is less expensive, the most recent price declines have been largely because of declining soft costs to install solar. The U.S. Department of Energy has set a goal to get the price down to $1 per watt.

These costs vary from project to project. “We've seen a couple in the range of $2 dollars per watt,” says Osdoba. A typical solar array on a large apartment building has 250 kilowatts of capacity and takes up about 10,000 sq. ft. of rooftop space. At $4 a watt, that array would cost about $1 million to purchase and install.

To figure out what how many kilowatt hours a potential solar array is likely to produce in a year, and how much money that is likely to generate, the National Renewable Energy Laboratory has created the PVWatts Calculator. Visitors to the PVWatts website can enter their location, the type of array they plan on buying and a host of other factors, and the website will estimate how many electricity the solar might produce and how many dollars it is likely to sell for.

In Brooklyn, N.Y., for example, a hypothetical array of solar panels has the capacity to produce a maximum of 250 kilowatts at any given time, if the sun is shining straight down on the panels and there’s not a cloud in the sky. Over the course of a whole year, given Brooklyn weather and how high the sun is in the sky, the panels are likely to produce 328,000 kilowatt hours of electricity a year, worth about $76,000, according to an estimate by PVWatts. (A kilowatt represents a flow of electricity over time.)

Many states and cities offer financial incentives to support solar development, such as State Renewable Energy Credits. Regions have their own incentives, including the New England Cap and Trade Program. Federal programs like the Renewable Energy Tax Credit also help, and utility companies sometimes offer incentives for solar power. Possible investors in solar power should contact local energy officials to make sure they don’t miss any relevant programs.

Owners of apartment buildings face a few challenges to adding solar to their buildings—starting with paying for the panels. Banks are now willing to make loans based on the likely income from a set of panels, but for existing, stabilized buildings, the loan to add the panels is likely to be a recourse loan that the borrower guarantees to pay back. Few building owners are enthusiastic about more recourse debt, even if the interest rates are attractive. Adding solar panels is easier to finance when a building is developed or redeveloped, because the cost of the panels can simply be rolled into the larger construction loan.

Apartment buildings are also at a disadvantage in installing solar compared to single-family homes and larger commercial buildings. Solar development companies have sprung up to help both smaller and much larger customers bring solar to their buildings. These solar developers take on much of the responsibility and risk of getting a solar project to work.