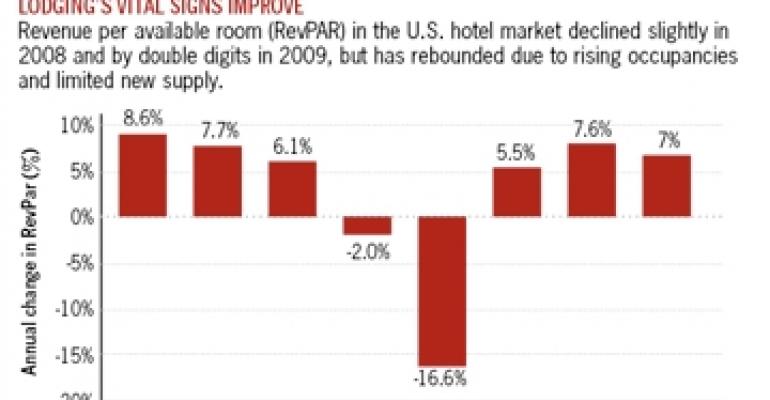 All Signs Point Up for Lodging

Real estate fundamentals and profits are on the rise, along with investor sentiment.

Both sides of the lodging industry — retail and real estate — are heating up. U.S. hotel demand continues to climb and rates are slowly rising, leading to healthy gains in revenue per available room (RevPAR), a key industry metric. And more importantly, unit-level profits are on the rise again.

The trend continued in April as RevPAR increased 7.9% on a 4.9% rise in occupancy and a 2.8% boost in rates. The luxury segment, which fell the furthest during the industry downturn, is leading the comeback.

These high-end properties are expected to approach 70% occupancy this year and next, with increases in ADR of 5.7% in 2011 and 7.2% next year.

After two years of decline, profits for the average U.S. hotel rose 9.8% in 2010, according to PKF Hospitality Research. Of course, hotel bottom lines took a beating during the industry downturn. U.S. hotels experienced a cumulative 37.9% loss during 2008 and 2009.

While rising demand and revenues have been most responsible for the rebound in profits, cost control is another factor. Although occupancy was up more than 6% last year, and more rooms were occupied, operators were able to keep the increase in total operating expenses to 3.4%

“While the growth in expenses was more than double the rise in the consumer price index for the year, it's slightly less than expected given the historical expenditure patterns we saw during the initial stages of past lodging industry recoveries,” says Dr. Jack Corgel, a Cornell University professor and senior advisor to PKF-Hotel Research.

“Part of the reason for the more modest growth in operating expenses is the continued high rate of unemployment and the resulting lack of pressure on wage rates,” according to Corgel.

Since profits drive value, the hotel transactions market is once again vibrant, with an influx of capital pushing up selling prices. Adding heat to the transactions marketplace is a near-record downturn in hotel development activity. Lodging Econometrics says about 400 hotels and 44,000 rooms will open this year, representing less than 1% of existing supply, the lowest levels since the early 1990s.

“The investment community, which only a year ago turned its back on the hotel sector, has come back strongly with both direct investment and through capital flowing to publicly traded hotel companies,” notes Sean Hennessey, president of Lodging Advisors, a New York City-based hotel industry consulting firm.

“The investment thesis is easy to understand. A recovery in the hotel business tends to create dramatic upticks in performance, so by getting in early investors can catch the full benefit of a cyclical recovery,” explains Hennessey.

An investor sentiment survey conducted by NREI and Marcus & Millichap in the second quarter reinforces that notion. Investors say hotel values will rise 6.9% over the next 12 months, the highest of any commercial property sector.

Nowhere is the hotel transactions market as feverish as it is in New York City. So far this year, sales of upscale, full-service hotels in Manhattan have topped $1 billion, about a quarter of all upscale urban lodging transactions in the U.S., says Jones Lang LaSalle Hotels.

Several high-profile sales in Manhattan have been announced in recent weeks, including the royal family of Brunei's $400 million sale of The New York Palace to Northwood Investors and FelCor Lodging Trust's purchase of the Morgans and Royalton Hotels for $140 million.

2011 BEST OF THE BEST TOTAL PACKAGE