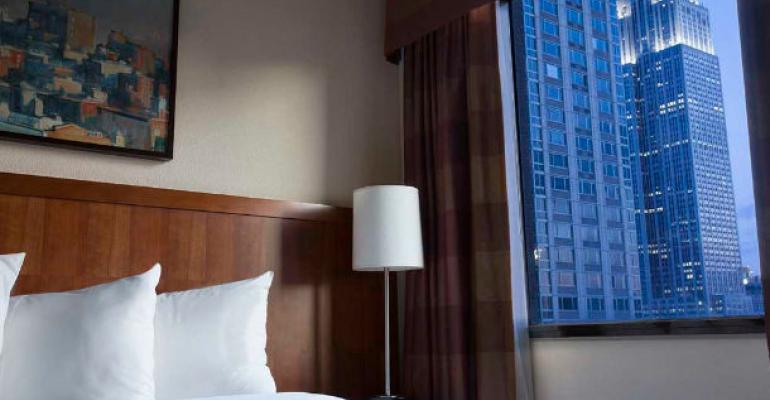 They got engaged, broke up and now they might be back together again—but the road to the altar still isn’t clear.

The Marriott-Starwood soap opera briefly appeared to be over when Starwood Hotels & Resorts accepted a higher acquisition offer from Marriott following a short-lived dalliance with a consortium led by Chinese insurance company Anbang. But after Starwood initially accepted Marriott’s improved bid, Anbang came back with another offer of its own, raising its bid to $14 billion. Marriott, for its part, has reaffirmed its commitment to acquire Starwood for $13.6 billion, a deal due to be put to vote April 8 in stockholder meetings for both companies.

In the meantime, CrediFi analysts examined what might happen if Marriott and Starwood do end up tying the knot to become the world’s largest hotel chain—specifically, what exactly their blended family might look like. We already know that if the merger goes through, Marriott and Starwood’s new family will include more than 1 million rooms in 5,500-plus hotels in various cities, countries and hotel brands such as Starwood’s Four Points by Sheraton and Westin, and Marriott’s Autograph Collection and Ritz-Carlton.

But many of these assets are in the same markets. And, just as when two individuals marry and each already has a home and other duplicate belongings that need to be combined or sold off, the question is what will happen to these hotels if Starwood and Marriott seal the deal.

There is the possibility that they could all live together in harmony, with plenty of tourists and business travelers in the Big Apple to go around.

But it is also possible that, as has been discussed with other planned mergers such as Staples-Office Depot or Walgreens-Rite Aid, some properties will end up being shut down to reduce cannibalization. This would seem to be most likely in hospitality-dense areas like New York City. In New York state alone, Marriott has 144 hotels, while Starwood has 37, with another eight scheduled to open by 2020, according to the companies' websites.

There is already a lot of competition among hotels in New York—many of which are new—and that’s before taking into account alternative arrangements like Airbnb. Between 2014 and 2015 alone, 61 hotels added over 5,000 rooms in New York City, and at least 185 hotels opened since January 2014 or are in the development and renovation pipeline, according to New York City tourism partner NYC & Company. That brings the total number of New York hotel rooms to over 107,000.

The extra supply is reflected in falling room rates in New York during each of the first three months of this year compared with the same period a year ago, according to the Trivago price index, even though it’s still the second most expensive destination among the top 25 U.S. hotel markets.

Marriott and Starwood are among those contributing to what some say is becoming a glut of new hotels in the city, and we zoomed in to take a look at about a dozen of their hotels in the Times Square area.

Several are financed by foreign lenders, such as Nanyang Commercial Bank in Hong Kong, which in 2013 issued a $45 million loan for the Algonquin Hotel at 59 W. 44th St., a Marriott Autograph Collection property that opened in 1902 and underwent a massive renovation in 2012. And Singapore’s Oversea-Chinese Banking Corp. issued a $105 million loan last year for Starwood’s Element New York Times Square West, a Westin brand billed as eco-friendly, at 311 W. 39th St.

Toronto-based Canadian Imperial Bank of Commerce originated CMBS loans for Marriott’s Courtyard New York Manhattan/Times Square at 114 W. 40th St., for $90 million, and Marriott’s Residence Inn New York Manhattan/Times Square at 1033 Avenue of the Americas, for $151 million. Both of these CMBS loans mature later this year—the Residence Inn in September and the Courtyard in December.

Some of the properties are structured as condo hotels, including Marriott’s Renaissance New York Times Square Hotel at 714 7th Ave. (also known as 2 Times Square) and Starwood's W New York–Times Square at 1567 Broadway.

There are also brand-new Marriotts and Starwoods that either just opened or are in the pipeline.

For instance, Marriott’s 348-room Renaissance New York Midtown Hotel, Renaissance’s new U.S. flagship, opened on 35th Street and Fashion Avenue on March 21, and boasts a “discovery portal” powered by Time Out New York, where guests can interact with a large digital platform to get an overview of neighborhood hotspots.

And Starwood is planning a dual-hotel development in Queens, including a Four Points by Sheraton hotel, with easy access to LaGuardia Airport and a joint fitness center and indoor pool.

It may look like Starwood and Marriott are in for a full house if they ever do head down the aisle, but they just might wind up with an emptying nest instead.