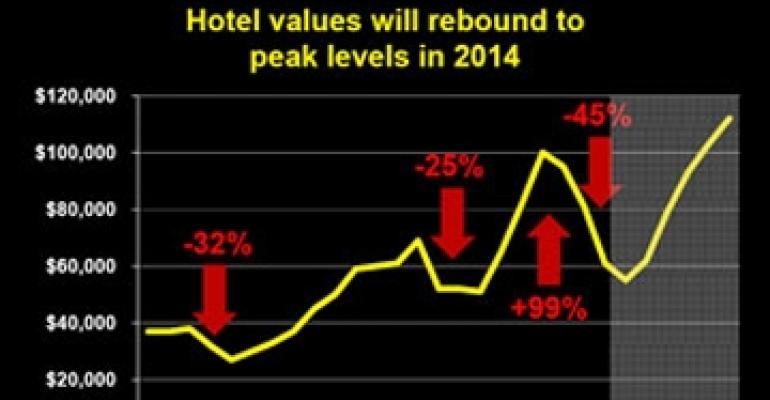 NEW YORK — Hotel ownership isn’t for the faint of heart in this troubled economy. The average value per room in the U.S. hotel sector has fallen 45% since peaking in 2006, according to consulting firm HVS, and won’t rebound to peak levels until 2014. For lodging owners, the long slide in hotel values mercifully is expected to come to an end next year.

Today’s dreary hotel investment picture is expected to brighten considerably in 2011, but not before an additional 10% drop in the average room value in 2010, forecasts HVS (see chart).

“If you are going to time the market for an acquisition, the time would be the end of this year or the beginning of next year,” remarked Steve Rushmore, founder and president of HVS, during a speech delivered Monday morning before several hundred hospitality professionals at the storied Waldorf-Astoria Hotel. “The bottom of the cycle from a value perspective will be in 2010.”

The 31st annual New York University International Hospitality Investment Conference annually attracts the industry’s top professionals, all of whom are grappling with the same questions: When will economic recovery occur, how much pent-up demand will there be among travelers, and when will the capital markets rebound?

The downturn for hotel owners began mildly enough in 2007 when the average room value dropped 5%, according to Rushmore, and then fell another 15% in 2008. “This year we feel that values will fall another 25%.”

With U.S. GDP contracting 5.7% in the first quarter on an annualized basis and the national unemployment rate at 8.9% and rising, hotel owners are feeling the financial pressure. Smith Travel Research reports that revenue per available room — a common measure of hotel performance — is down a whopping 18.2% year-to-date through April.

Wild swings in hotel valuations are nothing new. During the 1991 recession, hotel values on average lost 32%, according to HVS. Values slowly recovered through 2000, then they fell 25% following 9-11. From the early 2000s through 2006 hotel values then doubled.

In recent years hospitality professionals had grown hopeful that they could avoid the notorious boom and bust cycles of the past tied to overbuilding. In 2006 and 2007, for example, new room supply to the U.S. hotel industry rose a scant 0.2% and 1.3%, respectively.

The problem this time around, however, is that demand has fallen sharply. While new supply to the U.S. hotel industry is up a modest 3.2% year-to-date through April, demand has dropped 8.1%.

Still, Rushmore is bullish on hotel investment for the long run. “The good news is that unlike the previous recession, this recession has not been preceded by a lot of new hotel supply. Therefore, when the recovery takes place it will be rapid and strong, and of course it’s a huge buying opportunity,” said Rushmore.

When inflation finally begins to rear its head in the wake of trillions of dollars in fiscal and monetary stimulus by the U.S. government, history shows the hotel market will benefit, said Rushmore. That’s because during periods of high inflation — such as the late 1970s and early 1980s — the average daily rate (ADR) in the hotel sector tends to keep pace with, or exceed, the rate of inflation.

“The good news is that many economists predict a similar period of inflation will occur with the high government stimulus spending that’s current taking place,” said Rushmore. “This will be a huge benefit for hotel owners, particularly those with fixed-rate financing. I would strongly recommend that you fix the rate at their current levels because you’ll benefit as inflation hits.”

Frits van Paasschen, president and CEO, Starwood Hotels & Resorts Wordwide, on the prospects for economic recovery: “There will be a rebound, but I think this rebound will be different than other recessions. First, I don’t think the U.S. consumer will be the locomotive. This probably will be the first recession in the post-war era where we’ll have to grow while deleveraging at the same time. Both of those [factors] lead us to believe that this is going to be a slower, more protracted recovery, a rebound in slow motion if you will, compared to where we were before.”

Christopher Nassetta, president and CEO, Hilton Hotels Corp., on the push for more regulation of the financial markets: “I think there is now a burning desire politically and frankly from a consumer point of view to never have to endure this [banking crisis] again and to get stability built into our financial system and our economy. Too much legislation and regulation can have a real dampening long-term effect on our economy.”