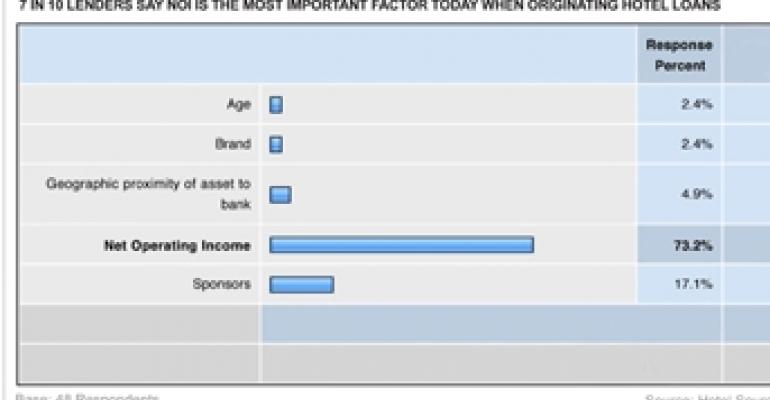 Although hotel lenders always take appraisals with a grain of salt, a newly released survey of capital providers indicates that appraisals are still the biggest factor when determining market pricing for hotel properties — even though many appraisers do not have specific knowledge of the lodging industry.

The e-mail survey, which was conducted April 15 to May 1 and sponsored by Hotel Source, a Chicago-based hotel real estate brokerage and advisory services firm, was sent to 1,000 commercial lenders and special servicers. The survey yielded a 4.5% response rate.

The majority of respondents (36.6%) indicated that appraised value is the way they determine pricing for a hotel they want to sell. However, according to Hotel Source, because many appraisers arrive at a more theoretical approach to value they do not accurately convey true market value.

“There is a business-specific knowledge that is often times overlooked,” says Steven Marx, president of Hotel Source. More often than not, appraisers undervalue hotels because they fail to recognize the business component, he adds.

Slightly more than one out of four respondents (26.8%) indicate that the broker’s opinion of value is the biggest factor in determining hotel values. According to Hotel Source, a broker’s opinion of value might be more reliable in many cases than appraised value, but caution must be used as many brokers list hotels for sale merely to obtain the listing and test the market.

An equal number of respondents (26.8%) indicated that the direct capitalization of net operating income is the biggest factor in the hotel valuation process.

When asked what type of properties they prefer to lend on, the vast majority surveyed (82.9%) indicated they would most likely make a loan on a ten-year old, full-service hotel located five miles off the interstate with significant positive net operating income and no required renovations.

“In the past, when most hotels were performing well, slightly older, full-service hotels off the interstate were not favored for mortgages even if they had positive operating income and did not require renovations,” Marx says.

Only 12.2% of respondents indicated that they would lend on a new, full-service development in a large metro area, even with an experienced hotel developer.

Which hotel product type is least likely to secure financing from lenders? Respondents cite the four-year old, well-maintained limited-service hotel located on a major interstate that has no positive net operating income.

“Again, lenders today want cash flow on day one,” Marx says. “The attitude of the survey is ‘forget about tomorrow.’ Lenders aren’t even thinking two to three years into the future.’”

One of the findings that surprised Marx is that the majority of the lenders on business (63.4%) would prefer to stay at a Courtyard by Marriott rather at an adjacent Four Seasons Hotel for just $20 more per night.

“There has been much press during the past year about the stigma associated with staying at luxury hotels such as Ritz Carlton and Four Seasons,” Marx says. “Many guests have shied away from these because of their perception of being extravagant.”