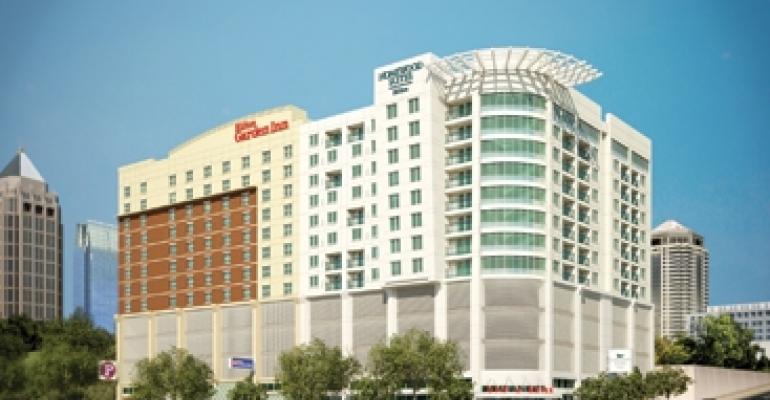 Hotel developer does his part to generate jobs in Atlanta

On a sunny and sweltering Aug. 18 in Midtown Atlanta, hotel developer Jay Patel beamed with pride as he addressed more than 100 people gathered inside an air-conditioned tent to kick off a groundbreaking ceremony.

It was a momentous occasion for Patel’s company, North Point Hospitality Group Inc., which is developing a dual-branded Hilton Garden Inn and Homewood Suites by Hilton at the northeast corner of 10th and Williams streets.

The two hotels, which will be housed within a 12-story tower, will feature 226 rooms: 134 rooms branded as Hilton Garden Inn, and 92 branded as Homewood Suites. The scheduled opening is the first quarter of 2013.

“It is so exciting for me personally, in this environment, to be able to create about 200 construction jobs over the next 18 months. These are jobs that are going to start immediately — not in three or six months,” noted Patel, the president and CEO of North Point Hospitality Group, in his remarks. North Point currently owns and operates eight Hilton and Marriott branded hotels in the Southeast.

Among the attendees at the groundbreaking ceremony were elected officials, local dignitaries, senior executives from Hilton Worldwide, and several bankers, including Wells Fargo, the construction lender for the project.

“After the hotel opens, we anticipate probably having another 100 or so permanent full-time and part-time jobs,” added Patel. “That’s great for a small company like ours to be able to deliver to the city of Atlanta.” With metro Atlanta’s unemployment rate hovering around 10%, well above the national average, that’s welcome news.

A day of irony

The groundbreaking festivities came the same day the Dow Jones Industrial Average plummeted 419 points due to concerns over a deepening European debt crisis and fears of a global recession. Patel’s feel-good story was a perfect antidote to the day’s otherwise gloomy economic news.

The community has rallied around this hotel development because it fills a void. It didn’t matter that the ceremonial groundbreaking was taking place in 95-degree heat. The excitement over this project was palpable.

The $44 million project is in a premium location, just minutes away from Georgia Tech University, Turner Broadcasting, the Woodruff Arts Center and more than 20 million sq. ft. of office space. Hotel guests will have easy access to and from the Downtown Connector (I-75/I-85).

This co-branded hotel is a dream come true for Patel. North Point acquired the land in 2007, but the credit crunch and Great Recession ensued. “The challenge has just been the economy more than anything else,” Patel told NREI. “We put [the project] on the shelf for a couple of years, knowing that it wasn’t going to happen.”

Because the extended-stay guests account for only 50% of Homewood Suites’ business, the dual-branded hotel allows
for ample cross-selling between the complementary brands.

Adrian Kurre, global head for Hilton Garden Inn, says that the “middle management folks” the brand caters to are frequently traveling because there is a limit to what they can accomplish through texting and phone calls.

“The way business gets done is still through hitting the turf — getting out there shaking hands, signing the deals and creating the relationships,” says Kurre.

Patel is already looking ahead to the next project. He has designs on building a Hampton Inn and Suites nearby in Midtown Atlanta. That chain also is in the Hilton family of brands. While he is proud, Patel is not complacent. As he says, “We’re only as good as our worst hotel.”