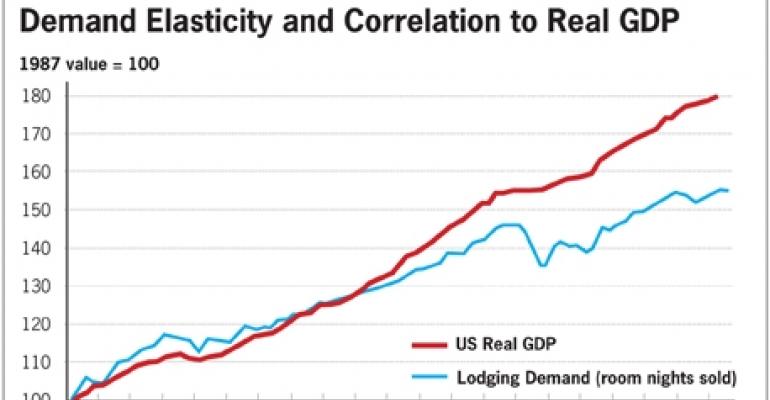 When hospitality professionals throughout the Southeast gather at the Marriott Marquis in downtown Atlanta early next week for the 21st annual Hunter Hotel Investment Conference, they likely will feel shell-shocked. A persistent credit crunch coupled with a series of negative revisions to the U.S. hotel industry forecast for 2009 are fueling uncertainty about when the sector will hit bottom.

For the past several months, forecasters have been playing catch-up due to rapidly weakening market conditions. In January, PKF Hospitality Research projected that revenue per available room (RevPAR) — a closely watched metric that takes into account both occupancy and revenue —would decline 9.8% in 2009 as compared to 2008. In light of the rapidly deteriorating job market, however, PKF now expects RevPAR to fall between 13% and 14% this year.

In fact, on a year-over-year basis, RevPAR isn’t expected to turn positive until the first quarter of 2011, reports PKF, although the rate of decline is forecast to gradually abate before that time. Meanwhile, the Atlanta-based researcher now forecasts that occupancy will dip between 7% and 8% nationally in 2009. That occupancy figure was revised from an earlier projected decline of 5.5%.

“I think that what many operators, owners and investors are concluding is that this [recession] will last longer than almost anyone anticipated,” says Dr. Bjorn Hanson, clinical associate professor at New York University's Tisch Center for Hospitality, Tourism and Sports Management. “I think that we’re in the midst of another structural resetting for the amount of demand per unit of GDP (gross domestic product).”

In other words, a certain parallel exists between GDP and lodging demand. When the economy contracts as it did in the fourth quarter of 2008 at an estimated 6.2% annualized rate, hotel demand also dropped sharply. It’s Hanson’s contention that when the economy begins to expand again — perhaps in the second half of 2010 — demand will rise but at a much lower level relative to GDP (please see the demand elasticity chart below).

“Consumers in the United States will permanently have a different view of discretionary spending in travel on the leisure side. Businesses also are learning to accomplish their objectives with less travel,” says Hanson. For the moment, that trend is reflected in lower attendance at trade shows and conferences and the rise of webinars.

But isn’t this deep recession a temporary condition that will inevitably reverse course, perhaps dramatically, at some point? “Consumer confidence will recover, but not to where it was,” emphasizes Hanson. “Consumers’ sense of security, and therefore how much they have available toward discretionary spending, is being changed for at least a generation. I don’t think that’s cyclical.”

Preliminary data from Smith Travel Research shows that RevPAR across all chain- scale segments dropped an average of 16% to 18% in February 2009 compared with February 2008. The luxury and upscale sectors were among the worst performers relative to RevPAR. The year-over-year comparison for February also reveals that occupancy declined an average of 10% to 12% across all segments. Smith Travel tracks about 2.9 million U.S. hotel rooms.

Against that backdrop of declining fundamentals, it’s likely that the job losses in the hotel industry will accelerate in the months to come, says Hanson of NYU. The U.S. Department of Labor reports a net loss of 33,000 non-farm payroll jobs in the leisure and hospitality sector during February. Hanson had expected the losses to be in the range of 50,000 to 60,000 based on his discussions with analysts prior to the release of the jobs report. “I think that we will see more of these very unfortunate, negative [job] reports.”

What’s the good news? The hotel industry is much more adept at making a profit than ever before, says Hanson. In 1990, occupancy nationally was about 64%, but the industry lost $5.7 billion. In 2008, occupancy was just over 60% nationally, according to preliminary estimates from Smith Travel, yet industry profits are estimated to be over $20 billion. “The headline is that with 4% less occupancy, the industry was about $25 billion more profitable,” says Hanson.

The hotel industry is financing itself more conservatively, he observes. In addition, hotel operators have increased profits from food and beverage operations and are using technology more effectively for staffing and setting room rates.