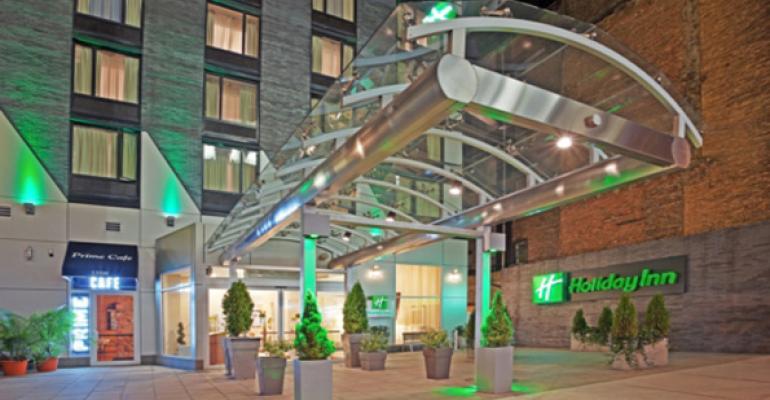 Which Hotels Could Gain From Airbnb Crackdown in NYC?

Airbnb’s decision early this month to settle its lawsuit against New York City means that Airbnb hosts can now be fined up to $7,500 for renting out a whole apartment there for less than 30 days at a time.

Tenants’ rights advocates have said owners who engage in illegal short-term rentals by renting out multiple homes in New York, Airbnb’s largest U.S. market, have reduced the availability of affordable housing there. Whether or not residents will benefit from the crackdown, there is, of course, also another group that stands to gain: New York City hotels, and the commercial real estate players behind them.

We zoomed in on non-luxury hotels in Hell’s Kitchen and the neighboring Theater District that are in the same price range as average Airbnb rentals of similar size, to see which hotels are likely to benefit.

A recent search of Insideairbnb, a site that aggregates Airbnb data, found more than 900 apartments with a minimum required stay of less than 30 days, and the average price was around $265 per night. Below are hotels in the area that seem to be competing with such Airbnb locations:

This Holiday Inn Express, located at 538 W. 48th St. in Hell’s Kitchen, lists rooms starting at $251, in line with nearby Airbnb prices. The 177-room hotel was refinanced last year with a $45 million loan from Buffalo-based M&T Bank, which was one of the top NYC commercial real estate lenders in the third quarter of this year.

This 700-room budget hotel at 250 W. 43rd St. in the Theater District could stand to gain from a larger share of customers seeking an inexpensive bed in a prime location—especially if it’s new owner is able to move the hotel past its status as the three-time winner of TripAdvisor’s dirtiest hotel in America survey.

Hotel guests have complained of bedbugs, dirty sheets and a lack of toilet paper. The hotel, built in 1929, has also had several elevator violations this year.

Hotel Shocard is a 47-room hotel at 206 W. 41st St., just below Times Square, that opened this year. The property used to be known as Hotel 41 at Times Square, which hit the auction block in late 2011 after the lender at the time filed for foreclosure. With room rates comparable to those of Airbnb, it seems poised to benefit from a possible Airbnb pullback.

The hotel, which was built in 1900 and renovated in 2008, was refinanced last year for $14.63 million. The loan was issued by the special-purpose entity MAM Hotel 41 LLC, which is affiliated with Marathon Asset Management, a New York-based investment manager that focuses on distressed debt investing and in which Blackstone bought a minority stake earlier this year.

The crackdown on Airbnb hosts in New York City might not be so great for the gig economy or one of the start-ups that has come to represent it, but it could be a boon for low-end hotels in prime Airbnb territory.