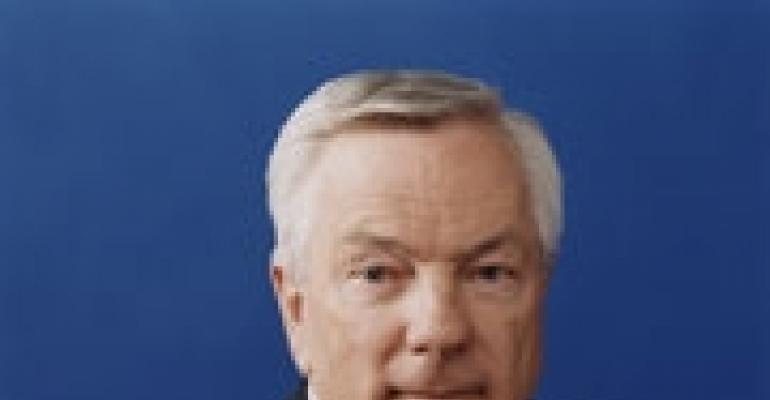 Given the volatility in the capital markets, the window has temporarily closed for multi-billion-dollar corporate transactions similar to the sale of Hilton to the Blackstone Group, a $26 billion deal completed in 2007. “All of us who have been in the hotel business for a long period of time realize that it’s a cyclical business,” said Bollenbach. “I don’t expect it to be dramatically bad, but I think that things are going to slow down.”

Still, there are some strong opportunities to scoop up individual properties in today’s marketplace, according to Bollenbach. On the mergers and acquisitions front, corporate deals under $1 billion is where the action is going to occur in the near term. “The market for big deals has shut down,” he said.

Bollenbach’s insights on the state of the industry followed his acceptance of a Lifetime Achievement Award from the Americas Lodging Investment Summit. The son of a milk salesman, Bollenbach was honored for a combination of brilliant financial acumen in executing complex deals, leadership ability, and his work with Teach For America, a national teacher program that recruits educators fresh out of college to work in rural or urban areas for two years.

“I think that it’s important to remember the help and guidance one receives along the way,” he told the audience of several hundred people. “In my case, I had the good fortune to work alongside and learn from some of the giants in the hotel and tourism industries. That illustrious group includes Bill Marriott, Michael Eisner [formerly of Disney], Barron Hilton, and others. Not only are they the industry’s most respected, but truly great mentors and I’m glad to say good friends.”

From 1990 to 1992, Bollenbach served as chief financial officer of the Trump Organization, where he helped refinance various assets and companies owned by Donald Trump. Prior to joining Hilton Hotels in 1996, Bollenbach was senior executive vice president and CFO for The Walt Disney Co., where he was instrumental in the execution Disney’s $19 billion acquisition of Capital Cities/ABC.

His first boss, the most influential in Bollenbach’s career, was Daniel K. Ludwig, a billionaire shipping magnate with interests in mining, hotels and other industries around the world. “[Ludwig] had the confidence in me at a fairly young age to put me in charge of his substantial holdings in Australia,” said Bollenbach. “I not only gained valuable business experience, but I developed a fondness for international business that I still have today.”

Of all the countless hotel deals he’s worked on, which is Bollenbach most proud of? Not surprisingly, he cites the Blackstone acquisition of Hilton with a smile. “I think our timing on that was excellent.”