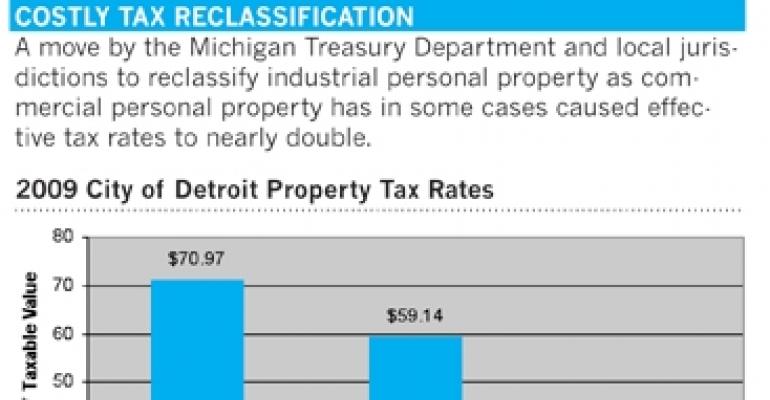 The tax credits threaten to reduce tax revenue to the state. To minimize lost revenue, taxing entities are attempting to limit use of the tax credits for industrial personal property by seeking to reclassify many of those assets as commercial.

Many of the actions have been initiated by the state or local jurisdiction based solely on the name of the owner, and without regard to the actual use of the property or the property’s legal classification. If a company’s name is Joe’s Manufacturing, it will not have a classification action brought against it, whereas Joe’s Warehouse will be the subject of such an action.

Because the law involved is relatively new, most taxpayers receiving notice of these appeals have little to no idea what the action involves.

Notwithstanding the statute, the state and State Tax Commission claim that the use of personal property governs its classification and that personal property has to be used for manufacturing or processing in order to be deemed industrial. There is nothing in the applicable statute to support that position, however.

The classification appeals recently filed make it apparent that the state and State Tax Commission recognize their claims may not prevail. As a result, in more recent filings they are seeking to change the classification of the underlying real estate from industrial to commercial.

It appears that most actions by the State Tax Commission and the State have been taken without any property specifics other than the name of the owner. If those reclassifications succeed, then the personal property at the site would also be redefined as commercial and not industrial personal property.

Taxpayers affected by such actions should consult with competent property tax counsel for advice on whether to defend such claims and, if so, how to proceed. In some instances, the government may have missed a critical deadline, which will give taxpayers an additional basis for prevailing.

The second source of property tax litigation in Detroit and other Michigan communities is shared by thousands of property owners across the country. Nearly everywhere in the United States, property values are depressed by as much as 40% or more from where they were before the onset of the recession in December 2007.

And just like local governments in other states, Michigan’s taxing entities are strapped for cash and reluctant to voluntarily lower valuations to reflect current market conditions. It’s no surprise that thousands of property owners have appealed assessments in hopes of lowering their property tax bills.

What may be surprising to property owners who haven’t already filed an appeal is that an unprecedented deluge of valuation protests has slowed down the panel that reviews them. As of July 31, there were approximately 2,600 non-small-claims cases pending before the Michigan Tax Tribunal for the 2008 tax year, and another 5,600 cases for 2009. Approximately 3,900 such new cases have been filed in 2010.

The tax tribunal recently adopted new procedures and is laboring to reduce this backlog and expedite the time it takes cases to move from filing to resolution. Most property tax practitioners applaud the tribunal’s recent efforts in this regard.

Even so, for anyone considering an appeal, it makes sense to start the process sooner rather than later and get in line to have the case heard.

Michael Shapiro chairs the tax appeals practice group at Michigan law firm Honigman Miller Schwartz and Cohn LLP. The firm is the Michigan member of American Property Tax Counsel, the national affiliation of property tax attorneys. He can be reached at [email protected]