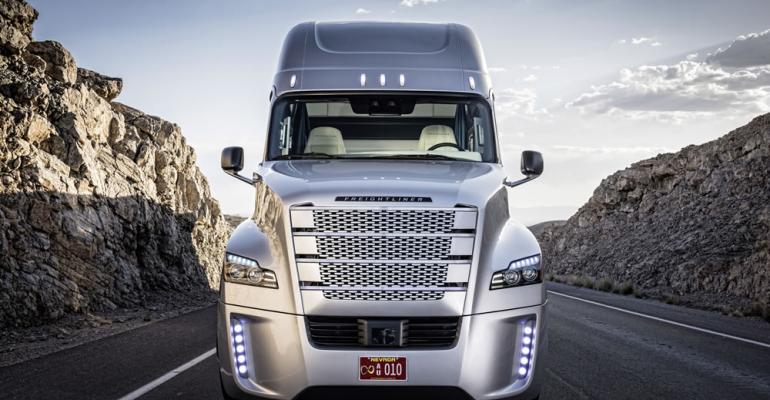 Cruising along a highway at night and seeing no one driving the 18-wheeler next to you is a scene right out of a Stephen King horror movie, but to some this is a dream, not a nightmare—logistics experts, in particular, look forward to the driverless car technology advancing enough to allow all long-haul freight to be driven autonomously.

Driverless cars have already made headlines, as Detroit-based automakers and West Coast tech firms push forward with test tracks and street tests. However, many tech experts say that self-driving trucks will be the first wave of autonomous vehicles simply because of the high demand. Whereas ordinary consumers may wish to remain at the wheel for the next few years, logistics firms, already struggling with a driver shortage, see potentially huge savings in being able to run autonomous 18-wheelers longer than the current 11-hour-at-a-stretch limit. There’s also the safety factor: logistics experts estimate that about 1 percent of U.S. vehicles are trucks, but they account for 5 percent of all miles driven and are the cause of 10 percent of deadly accidents.

In mid-August, Uber said it spent $680 million to acquire Otto, a San Francisco-based technology start-up that is creating self-driving kits for existing trucks. The Otto executives came from the right tech backgrounds, and the firm also announced a partnership with Swedish car maker Volvo. “Over one million people die on the roads every year,” Uber executives said in a press release. “This is a tragedy that self-driving technology can help solve.

Municipalities, developers and even investors need to start considering the commercial real estate impact of trucks that don’t need drivers, says Joe Dunlap, who leads the supply chain services practice at real estate services firm CBRE. An autonomous cargo vehicle, combined with robotic unloading and warehouse interior operations, would alter distribution center design and site selection decisions. Self-driving vehicles significantly expand the hours of service trucks can provide for warehouses, as current federal regulations restrict the number of hours a driver can work to about 400-500 miles per day, according to an April 2016 CBRE report. Large warehouses currently have to be somewhat close to large population hubs so that drivers aren’t putting in too many expensive hours; but with no human labor involved, these trucks can be located in cheaper, remote areas, Dunlap says.

“Driverless trucks will be a game-changer for the industrial markets,” he notes. “They can be made fairly reliable on highways, and we’re already facing a massive driver shortage.”

Logistics companies can already see the gains being made by companies in bringing driverless trucks to market. Earlier this year, a road train of five trucks rumbled through Barcelona, Spain as part of the Safe Road Trains for the Environment. The first Volvo truck had a driver, but the other four that followed had empty cabs. This is known as “platooning,” and can be accomplished by the other trucks keeping in line with the driven truck—while also saving on fuel, because the following vehicles can draft each other. Meanwhile, Daimler is working on its autonomous Freightliner Inspiration 18-wheeler, with the company claiming that driverless trucks may be dominating the road by 2025.

Still, there are challenges left to solve. These include the likely implementation of regulations on driverless vehicles. Several states have begun introducing regulations for autonomous vehicles, including Nevada, Florida, Michigan and California, according to a June 2016 study by Jason Henderson and Jason Spencer, students at the Cornell Baker Program in Real Estate. Currently, there is just a patchwork of differing state laws, and the U.S. government has not approved any laws on the subject. Furthermore, there are ethics concerns to examine when no one is at the wheel. A DHL-authored study in 2014 questioned who would be responsible for self-driving truck accidents—the owner or the programmer?