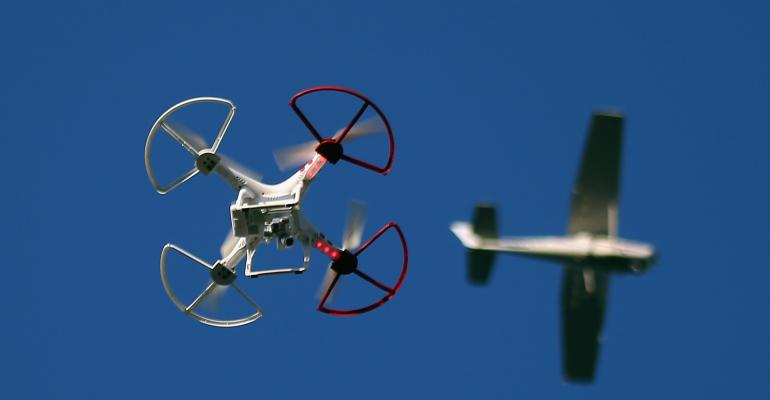 Since their initial use, small unmanned aircraft systems, or drones, have prompted controversy over privacy rights, and even spurred state action to protect their citizens from prying, flying eyes. But the current utilization of drones as surveillance tools pales in comparison to the impact they may have on everyday society from another standpoint. Indeed, the greatest impact that drones have may be on property rights.

Some retailers have already announced plans for delivering shipments via drones within the near future. At least one such retailer has stated that its planned drone delivery service can be up and running as early as 2017. It is not too difficult to envision a future where hundreds to thousands of drones fill city skies with deliveries, drop packages off on the top of towers, form flight paths to dense destinations and dramatically change the urban landscape as we know it. A segment of the sky previously devoid of activity will suddenly become filled with air traffic, forcing the question: who owns that airspace?

The prevailing law on property owners’ airspace rights comes from the Supreme Court case of United States v. Causby. In that case, the Court stated that landowners own “at least” as much space as can be “used in connection with the land,” including the airspace within the “immediate reaches above the land.” Causby stated that interference in a person’s airspace could occur with “an intrusion so immediate and direct as to subtract from the owner’s full enjoyment of the property.”

Just how far above a person’s land air rights go and just how much of an intrusion constitutes an “actionable interference” were questions the Court left unanswered. The Court’s ambiguity can be forgiven, however, considering the case was decided in 1946. Air traffic at that time was, for the most part, well beyond the “immediate reaches” of private property.

Commercial drone use has barely begun to reach its potential, which explains why this key air rights question has so far remained largely academic. In the near future, the proliferation of drone shipping is likely to bring continuous flights into the airspace above private property. The question of who exactly owns that airspace will be one that property owners, as well as commercial drone operators, will want answered.

That the question has not been a point of focus yet is hardly surprising. After all, an amateur drone operator filming 100 feet above a single-family residence is less likely to be seen as a Causby type of “intrusion” into that property owner’s airspace than the consistent flight of drone shipments over the same home as deliveries come into a neighborhood. If courts consider this kind of flight to be a trespass into private airspace, a market for low altitude air rights would likely come into existence. Operators may need to purchase avigation easements over strategic properties to ensure that their drones will not be trespassing when deliveries are made. It is not hard to envision a situation in which speculators purchase air rights in certain areas to take advantage of this possibility.

Drone operators and property owners should also consider the potential for nuisance claims. Drones carrying shipments will likely follow certain flight paths that maximize efficiency and flow towards the areas with the highest amount of orders—properties underneath these flight paths and near the takeoff and landing points particularly will be subject to noise and visual impact unlike any previously seen. These initial points, or “droneports,” could impact the surrounding land and local land use laws in a manner similar to airports. Because of the inherent limitations of drone shipments, droneports are likely to be multi-modal: trucks, trains and other traditional shipping mechanisms will bring in products from far-off warehouses, while drones will distribute them quickly and locally once they arrive. Unlike traditional warehouses, which are located in industrial areas often away from urban infill, droneports are likely to be located within urban areas to efficiently and effectively serve the local population. This proximity all but ensures that their impact will be felt by the surrounding neighborhoods.

The prospect of such a vast change in low altitude airspace in urban centers, while not yet a reality, is far from fantasy. Current same-day delivery services can deliver packages within hours by utilizing urban “fulfillment centers” that act as small warehouses within cities. These centers could be converted to act as launch ports for drones that promise delivery within minutes and have a significant effect on the areas in which they are located.

While companies move forward in research and development, regulations are inching along. The Federal Aviation Administration (FAA) released rules in June of 2016 that allowed for the commercial use of drones, but with restrictive limitations that hinder any large-scale drone shipping program. For instance, drones must stay within unaided sight at all times and can’t be flown over anyone not participating in the flight operation.

Assuming the FAA eventually catches up to the current technology, the impact of hundreds of drones taking off and landing in a crowded metropolis will undoubtedly trigger additional regulation. Building heights, take-off times and other local land use measures used to curb the impact of traditional airports may be considered by both local governments and the FAA in connection with drone deliveries. The scope and impact of such land use measure and the as-yet-to-be resolved airspace issues mentioned above remain key hurdles that must be cleared in order for drone shipping to reach its potential.

Garth Bostic is an associate in Nixon Peabody’s Los Angeles office. He works with clients ranging from property owners to developers and investors on a variety of commercial real estate transactions and corporate matters.