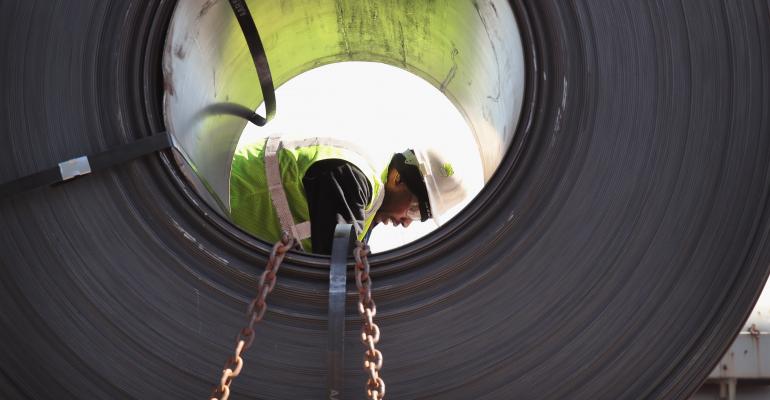 JLL Economist Walter Kemmsies shares his views on how the tariffs could impact the U.S. economy and commercial real estate.

Against the advice of trade experts and members of Congress on both sides of the aisle, President Donald Trump has imposed tariffs on raw steel and aluminum that may set off a trade war. European and other trading partners, who are also U.S. allies, are already promising to retaliate with tariffs of their own on U.S. imports.

While Trump’s tariff rhetoric has focused on China, less than 2 percent of that country’s steel exports are to the United States. The countries hardest-hit by the tariffs in the immediate future will be European Union nations, particularly the U.K. and Germany, as well as South Korea, Brazil, Japan, Taiwan, Turkey and Russia. Canada and Mexico, the two biggest U.S. trading partners, are exempt from the tariffs for the time being, even though Canada exports more steel to the U.S. than any other nation and Mexico is among the top 10 biggest sources of foreign steel.

The top 10 exporters of steel to the U.S. in 2017, accounting for 77 percent of all steel imports or 26.8 metric tons of steel, according to the U.S. Department of Commerce, are: Canada, Brazil, South Korea, Mexico, Russia, Turkey, Japan, Germany, Taiwan and China.

In the following Q&A, Economist Walter Kemmsies, managing director and chief strategist of the U.S. ports, airports and global infrastructure group at real estate services firm JLL, shares his views on the how these tariffs and a potential trade war could impact international trade, the U.S. economy and commercial real estate.

NREI: What are the most immediate impacts of Trump’s tariffs on commercial real estate, besides the higher cost of building materials?

Walter Kemmsies: Uncertainty. It’s not clear which countries will be exempt from the tariff or how our trading partners will react. Without clarification, the uncertainty will get worse. Commercial real estate operates on yields, so projects planned may not pencil [out] depending on potential increases in material costs. Folks will postpone projects and recalculate costs. Projects close to the border, or exceeding a minimum required return, may be delayed or canceled. The urgent deals will go through, maybe even regardless of tariffs, but borderline projects could be abandoned.

NREI: Are the any advantages to a trade war? Trump says the U.S. will easily win it. How could a trade war be won?

Walter Kemmsies: The reality is we have been running a trade deficit for 42 years. Since China joined the World Trade Organization (WTO) the trade deficit has increased substantially and is now a half-trillion dollars, or about 3 percent of the U.S. GDP. This is more than the GDP of 150 of the 180 countries in the world. How long can we run a deficit like this before bad things begin to happen—our growth prospects begin to dim? Sooner or later a correction to the imbalance has to happen. Something should have happened years ago. We can’t have the biggest economy in the world with the biggest deficit.

Lots of investment and jobs have moved outside the country. China has manipulated the currency, making its products artificially cheap. But the U.S. Treasury has yet to formally list China as a currency manipulator. This hasn’t happened most likely for political reasons. But China’s currency manipulation is evident if you compare the U.S.D. to Chinese Renminbi exchange rate over time with another currency pair, such as the U.S.D. and the Euro or the U.S.D. and the British Pound. The U.S.D. to Chinese Renminbi exchange rate does not fluctuate like other currency pairs do. It looks like stair steps compared to the Euro’s squiggly lines.

Unlike with China, when there is a trade dispute with a European nation, like illegally subsidizing a specific product, there is a civilized means for resolving it through the WTO court.

The question should be: Is there an alternative to a trade war? I believe we sit down with our trade partners and create broad international pressure on China to change its ways. I thought the Trans-Pacific Partnership (TPP) would address these issues, but that’s no longer part of our policy position. By leaving the TPP we reduced our options to open exports for U.S. markets.

China has a big, growing middle class that is a target market for U.S. agricultural products. China has been unpredictable about allowing U.S. agricultural exports to compete there. For example, when the outbreak of Mad Cow disease in the U.S. was resolved some years ago, China took a long time to lift a ban on U.S. imports, and in 2015 only executed a partial lift of the ban.

But it’s hard to know where to point the finger, as we haven’t done everything possible to improve exports. We sign trade agreements without investing to support our exporters. We’re partly to blame for our deficit because we didn’t invest in the infrastructure needed to move exports to market. So if we want to increase exports, where’s the infrastructure policy to support it?

In fact, our last big infrastructure project was in the 1980s, when the Tennessee–Tombigbee Waterway connecting Alabama’s Tennessee River to the Mississippi waterway was completed. This investment helped farmers move agricultural products to the Gulf ports.

Walter Kemmsies: There are many more Americans employed in industries that use steel to make things, including manufacturing and construction workers, than in producing steel. Approximately 100,000 to 150,000 Americans are steel workers, while the construction industry alone employs more than 10 million (Statista) workers, so this could affect a sizable workforce. While it’s hard to quantify the impact or its timing, overall the impact on the economy is likely to be small, but significant to the commercial real estate industry.

NREI: A trade war might reduce imports and exports. How would that impact the industrial real estate sector? The manufacturing sector? The logistics sector? The U.S. ports?

Walter Kemmsies: If trade through ports slows down, industrial real estate around ports will slow down too. International containers are 40-feet long, but U.S. trucks or trains can accommodate 53-foot containers. Three 40s can be packed into two 53s. So I predict we’ll still see strong industrial activity, with warehouse workers repacking international shipments for transport across the United States.

Additionally, restructuring by international freight lines has resulted in bigger ships that reduce shipping costs, which will help to offset increases in tariffs.

But a trade war that results in a decline in import volume could have a more devastating impact on U.S. inland locations with economies dependence on imports.

A trade war would also increase tariffs and most likely the cost of consumer goods. The biggest driver in the U.S. economy is consumer demand, which is determined by income level. If consumer prices and income don’t rise at same rate, demand for products will decrease, resulting in another recession like in 2008 to 2010.

NREI: Is there anything else you’d like to say about the potential impact of the tariffs?

Walter Kemmsies: I’m not convinced a trade war will break out; it would break WTO rules across the board. The tariffs could be rescinded as quickly as they were announced.  Our trade policy is still unclear. I’m hoping that this is about sending a message, rather than an all-out trade war.

We need to do what’s necessary to increase exports. One bright spot is fracking has reduced U.S. oil imports, and now we could become the world’s largest oil exporter. Opening the world market to U.S. exports matters to the overall outlook for commercial real estate.