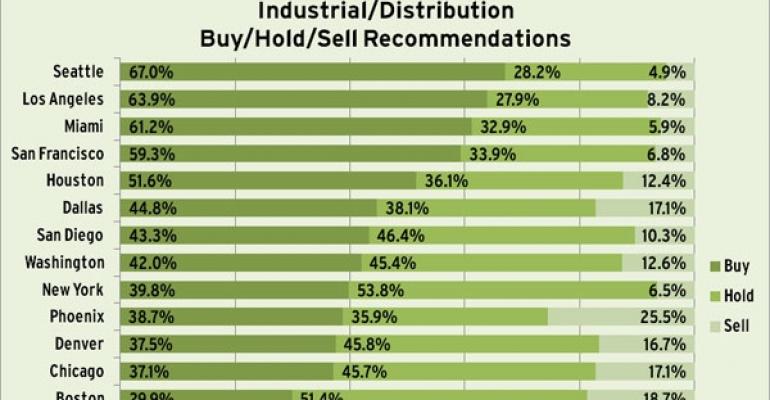 Industrial real estate may not grab headlines, but the sector has recovered slowly throughout 2011 and insiders expect that trend to continue in 2012 and beyond.

“If you look at the industrial markets that are really flourishing right now and coming back in a strong way now, they are the larger distribution markets,” says Ryan Spradling, a leasing and sales specialist with Cassidy Turley BRE Commercial’s industrial division in San Diego. “We’re seeing very large blocks of space being taken down by corporate users and there is high demand for spaces 500,000 sq. ft. and larger. So the larger blocks of space have seen good activity from the leasing standpoint and also from the investment side.”

Industrial product has traded steadily, though unevenly in 2011. Cap rates on class-A properties in top locations have compressed while they have remained stable in secondary markets. “Cap rate spreads between primary and secondary markets are high by historical standards,” says Rene Circ, national director of research for industrial properties at Grubb & Ellis. In addition, as in other sectors, deal volume has slowed as the year has progressed.

“What we’ve seen year-to-date is some very well-priced—from a seller’s standpoint—executions earlier in the year,” says Gary Gabriel, an executive vice president with Cushman & Wakefield’s New York Metropolitan Area Capital Markets Group. “We then saw a good bit of product hit the market in the late second quarter, third quarter. That was a mixed bag in terms of quality of product, but there was definitely a lot more of it.”

Still, volumes are up year-over-year. In the third quarter alone, $17.8 billion in industrial properties changed hands, according to Jones Lang LaSalle, a 65 percent increase over the same period a year ago.

Gazing into the crystal ball, the industry is “going to see a very big volume in 2012 very similar to what you saw this year,” says John Huguenard, managing director and head of industrial capital markets for Jones Lang LaSalle in Chicago. “There was a lot of concern that there was going to be a lot of let-up coming out of the gate for 2012, but really there are a lot of sellers coming to the market and a lot of buyers and it’s extremely active.”

And the kinds of deals that may occur in 2012 will depend on the types of buyers. Large institutional owners will remain active in primary markets—the East and West Coasts, Texas and Chicago—while value-add investors and private equity firms may dip into second-tier markets, Huguenard adds.

Much of the deal-making next year will also depend on capital markets. The CMBS sector took a hit and slowed its lending volume while life companies met their quotas for 2011 and also have been less aggressive as the year winds down, according to Circ.

But Circ expects activity to pick up again in 2012, especially if CMBS volumes pick up again. In addition, a lot of funds are targeting real estate and should be increasingly active next year, especially since many of those funds are not heavily reliant on high leverage levels.

For its part, BH Properties, a Los Angeles-based acquirer of office, industrial, retail and mixed-use properties, expects to remain active in the space next year.

“Our acquisitions strategy at BH Properties focuses on Arizona, Nevada and Southern California—hard-hit areas we believe will recover and where we are aggressively looking to reinvest capital in industrial, multifamily and retail,” says Steve Jaffe, executive vice president of BH Properties.

According to the annual Emerging Trends report produced by PwC and the Urban Land Institute, the industrial sector trails just multifamily in terms of attractiveness to investors. By market, investors surveyed are most bullish about Seattle, Los Angeles, Miami and San Francisco in 2012.

When it comes to leasing, as on the investment side, activity has been strongest in core markets.

“We believe that for the next one to two years there will continue to be a movement of industrial tenants to core markets,” Jaffe says. “Tenants will continue to capitalize on current market trends by upgrading their facility or location, or both.”

Big deals continue are getting inked. For example, this week ProLogis announced that it fully leased a recently acquired distribution center in Phoenix to a leading retailer. The customer will fully occupy the 302,640-sq-ft. Prologis Tolleson Distribution Center 1.

“The shortage of large blocks of space in this submarket gave us an opportunity to serve a customer and to create immediate value,” Kim Snyder, president, Southwest region for Prologis said in a statement. “With this transaction, we were able to capitalize on an ideal product type in a market that has had seven quarters of positive absorption and is in the midst of a sustained recovery.”

“Demand for industrial space in the third quarter was the strongest it has been since the end of 2007 and availability should steadily decline next year, helped by a near-record low level of new construction,” says CBRE-EA economist Jared Sullivan.

CBRE-EA reports that many markets are reporting a flight to quality as tenants take advantage of low rents to upgrade to larger, higher quality space. At the same time, industrial demand drivers remain positive, with exports continuing to grow. U.S. containerized exports expanded 6.7 percent in the third quarter, according to figures released by The Journal of Commerce/PIERS, leaving export volume from the United States up 8.3 percent through the first nine months of 2011.

Some markets are reporting shortages in prime space. For example, Riverside, Calif., is reporting availability rates for buildings over 500,000 sq. ft. at 5 percent compared to a market average of 12.1 percent, according to CBRE-EA. Other markets that may experience sharp improvements in occupancies next year could be Oakland, Chicago and Philadelphia, all of which have experienced low levels of construction. Markets where rents may rise the fastest include Riverside, Calif., Los Angeles and Indianapolis, according to CBRE-EA.

“I remain optimistic that the industrial markets will continue on their current path toward a sustained recovery,” says Jamie Kishel, director of operations for Cushman & Wakefield Industrial Services. “A broad look at the driving economic factors suggests that vacancy rates will continue to drop for the foreseeable future, putting upward pressure on lease rates.”

State of the pipeline

CBRE-EA expects construction will be limited in the near term as current rent levels are not supporting speculative construction in most markets. The lack of new construction will continue to drive down the availability rate nationally, a trend which should accelerate in 2012 and 2013 as demand grows faster than supply for the next several years.

Grubb & Ellis’ Circ, however, expects construction to accelerate in 2012 with total deliveries doubling 2011’s output. Much of that will come from speculative construction, he says.