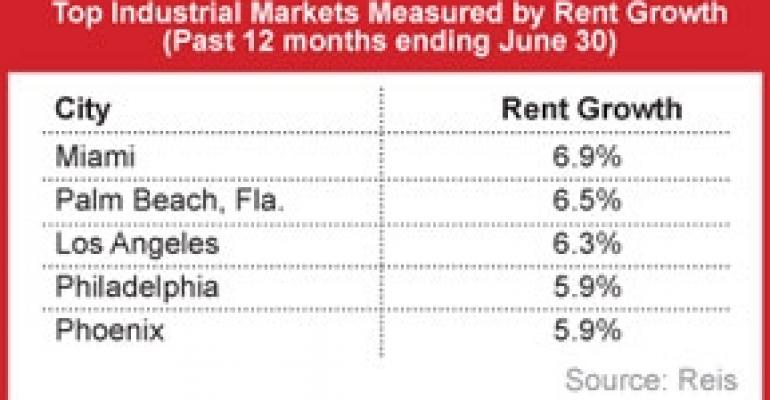 Industrial Market Is Soft But Not Sour

Weakened demand for warehouse and distribution space contributed to a rise in the nation’s industrial vacancy rate in the second quarter, but rents are still rising in some major metros and port cities, researchers say.

The national vacancy rate climbed to 8.52% at mid-year, up 34 basis points from the first quarter. Performance varied widely as 36 markets posted higher vacancy rates from the first to the second quarter while 20 markets experienced a drop in vacancy, according to Colliers International.

“There’s clearly a considerable amount of negative sentiment swirling around the warehouse leasing market at this time,” says Ross Moore, executive vice president and director of market and economic research at Colliers International.

Companies are taking a wait-and-see attitude, putting off commitments to new space until the economy grows more stable, Moore says. “This is hampering any significant forward movement for the industrial sector,” he says. “That said, the export sector remains a bright spot, showing it’s not all doom and gloom for industrial.”

In fact, a weak dollar has lowered the cost of U.S. exports in recent years, and the resulting increase in export volume has helped to offset declining imports as U.S. consumers cut back on spending, according to Sam Chandan, chief economist at researcher Reis. The volume of imports and exports when combined has increased by almost 3% in both the first and second quarters, according to Reis.

Chandan expects industrial vacancy to stay at or near its current rate through 2009. In 2010, Reis is projecting absorption to outpace construction, ushering in a gradual decrease in the national vacancy rate that will continue through at least 2012.

“The relative balance between supply and demand for industrial space — the high rate of utilization in many of the port markets — will allow vacancy rates to remain in check and relatively stable as compared to what is observed in the other [property] sectors,” Chandan says.

Rents for industrial space were marginally lower during the second quarter, posting a 1.3% decrease and reducing the national average to $5.52 per sq. ft. That marked a 0.7% drop from $5.56 per sq. ft. a year ago.