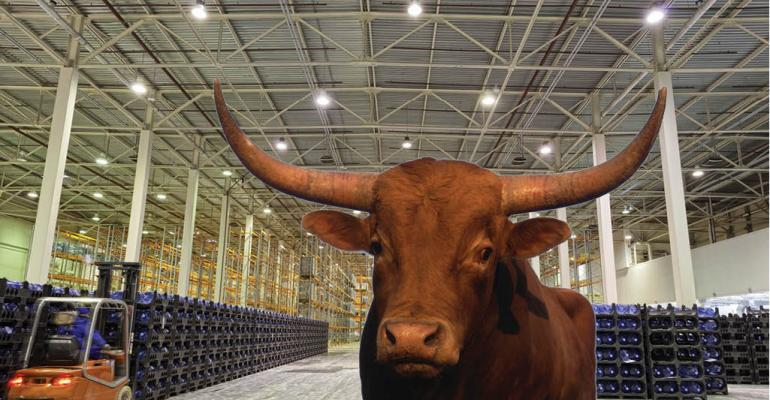 All eyes were on the industrial real estate sector when news broke last month of the Prologis/Norges Bank mega deal. The joint venture agreed to pay $5.9 billion for KTR Capital Partners and its 60 million sq. ft. of U.S. industrial space. This followed last year’s purchase of Blackstone’s IndCor Properties and its 117 million-sq.- ft. portfolio by GIC, Singapore’s sovereign wealth fund. The transaction set records at a massive $8.1 billion, and became the largest transaction in the history of the industrial asset class.

Both deals represent an increasing interest in industrial real estate from foreign investors. In fact, the two deals demonstrate a shift towards the continued institutionalization of the industrial investment landscape.  And the combined foreign capital involved this year has already surpassed all foreign investment in the sector from 2001-2009 by 37 percent.

So why now? Industrial real estate has always been the steady and less glamorous cousin of office real estate, but now it is looking more attractive than ever. The strong macroeconomic climate has positioned the U.S. as a safe and stable environment for investors who may be experiencing economic volatility at home.

And the U.S industrial real estate market conditions remain bullish. Vacancy rates this quarter were at a 10-year low of 7 percent. Thirteen of the 50 U.S. markets tracked by JLL reported vacancies under 6 percent, while nine markets, including Seattle, Los Angeles, Denver and Houston were below 5 percent. With these figures we can expect rental growth to outpace the U.S. average in these markets. In fact, national warehouse/distribution center rents were up 5.4 percent from a year ago, while the four aforementioned markets rose 10, 14 and 17.7, respectively. Take-up numbers have been equally as impressive, as total net absorption was up 17 percent year-on-year and has risen each quarter for almost two years.

Retail distribution (notably, e-commerce) has been fuelling as much as a third of the demand and there is a race for space playing out in the field. There is 157.7 million sq. ft. of space currently under construction, which is up 22.1 percent from last year. And so far this year, 34.4 million sq. ft. of new space has been delivered and nearly 50 percent have had tenants ready to move in.

These are attractive conditions for investors needing safe, long-term growth and returns. There is particular interest from investors in Asia Pacific, especially from Japan, Singapore and South Korea. This trend has been driven by land limitations, high valuations, low yields, limited opportunities to develop new product and weak economic growth throughout the Asia-Pacific region.

The most active source of foreign investment into to U.S. industrial real estate is from Canada, with 50 percent of investment, comprising $3.5 billion, coming from Canadian capital between 2012 and 2014. This was followed by investment from Germany, Norway, Switzerland and the United Kingdom.

Office investment still wins favor with foreign investors, but with the latest portfolio deals and looming interest from Asia Pacific, industrial real estate could become a close second. If there are more mega-portfolio trades this year, industrial could top the list as the most favored asset class for foreign capital.  This would be an industry first, and would signify a mini-industrial real estate revolution.