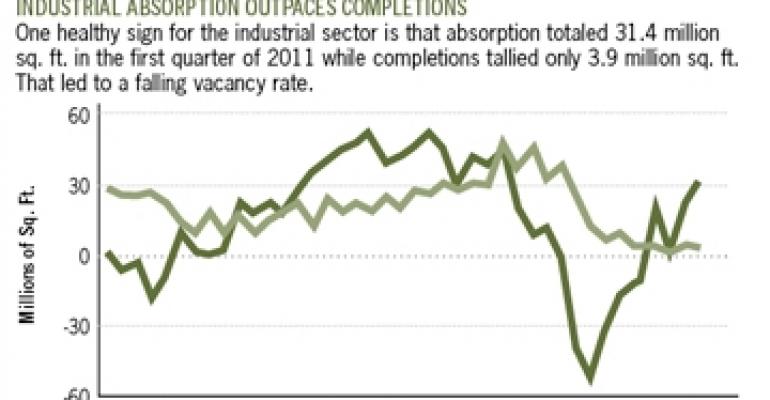 Although the industrial market is bracing for a slow recovery, the surge in demand for space in recent months is lifting spirits — and occupancies — across the country.

“We are seeing more leasing activity pretty much across the board,” says Peter Schultz, executive vice president of the eastern region at Chicago-based First Industrial Realty Trust. “Market rents are stabilizing. While there is still a lot of space to absorb, the trends are generally positive.”

The increase in economic growth coupled with limited construction is helping to chip away at the more than 1.1 billion sq. ft. of excess space that remains on the market.

After topping out at 10.9% a year ago, the average vacancy rate nationally improved to 10.1% in the first quarter, according to Grubb & Ellis.

Yet the rate of recovery varies widely depending on the market. Coastal cities and key distribution hubs are experiencing a stronger rebound in demand, while many Midwestern cities are still working toward market stability.

Optimism also is tempered by challenges that remain in the market, such as high unemployment and energy costs. Overall, the forecast calls for a slow industrial market recovery in 2011 with absorption expected to reach 60 million sq. ft. by year's end, according to Grubb & Ellis.

The recovery is expected to be more robust next year with absorption likely to double to 120 million sq. ft. in 2012.

A prolonged recovery will make it difficult to eliminate the deep discounts that landlords have used to entice tenants over the last two years.

“We are starting to see a pullback in concessions, particularly in stronger markets where absorption levels are on the rise,” says A. Dwight Hotchkiss, executive managing director of client services in the Los Angeles office of Colliers International.

However, asking rents for general industrial space fell 4.3% in the first quarter to $4.99 per sq. ft. triple net.

A rebound in global trade and the restocking of depleted inventories by retailers, wholesalers and manufacturers are fueling demand for industrial space. Strong industrial markets such as Chicago, Atlanta and Northern New Jersey performed well in the first quarter with positive absorption, while smaller secondary and tertiary markets such as Minneapolis and Columbus, Ohio continued to struggle with negative absorption.

California's Inland Empire is by far the hottest industrial market in the country due to its proximity to the busy ports of Los Angeles and Long Beach.

The Inland Empire market absorbed some 5.5 million sq. ft. of space during the first quarter, which accounted for 18% of the total industrial absorption that occurred nationally, according to Grubb & Ellis.

In fact, recovery is moving so quickly in the Inland Empire that the development pipeline is starting to fill.

Nevertheless, buyers are lining up capital sources so they can move quickly when opportunities arise. Sacramento-based Panattoni Development Co. and the California State Teachers' Retirement Systems (CalSTRS) announced earlier this year that the two entities had formed a $1.15 billion equity joint venture to seek industrial and other commercial real estate opportunities.

Investors are continuing to favor best-in-class properties in top markets. “Certainly, there has been a lot of capital that has been raised that is looking for a home,” says Schultz.

“I think you will start to see that capital migrate a little bit up that risk spectrum as time goes on.”