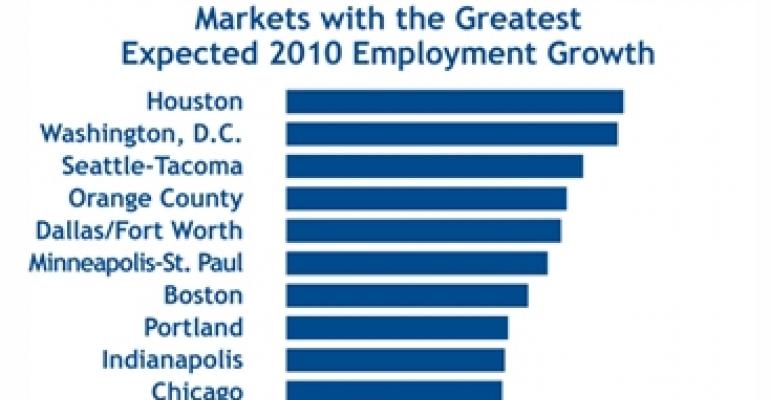 Widespread improvement in the industrial sector won’t occur until 2011 and 2012 despite recent economic and manufacturing gains. That is according to a new report issued by Encino, Calif.-based Marcus & Millichap Real Estate Investment Services.

While the manufacturing sector grew for the tenth consecutive month in May on the strength of new orders and production, industrial vacancies will remain elevated throughout 2010 as tenants have more space than they need. However, some industrial markets like Houston, a port city, are better positioned to rebound faster as tenant demand rises and greater employment growth is expected.

“Manufacturing continues to post gains, which will bolster a 2011 recovery in the industrial property sector,” says Alan Pontius, managing director of Marcus & Millichap’s national office and industrial properties group. “Future economic expansion will also be driven by personal and corporate spending.” Both were the primary drivers of GDP growth during the first quarter of 2010.

“As private consumption resumes, business will be encouraged to replenish depleted inventories in anticipation of further increases in demand, albeit at a slow pace,” says Pontius.

Employment growth will be a crucial component in stabilizing consumer sentiment and supporting spending, according to Marcus & Millichap. More robust economic and employment growth won’t take hold until 2011 and 2012.

As the industrial sector begins its slow rally, investors are hoping that cheaper turnover costs and growing competition for available assets will help to stabilize cap rates. Cap rates for best-of-class assets or those located in top industrial markets with credit tenants and long-term leases in place will likely end 2010 in the high-6% to mid-7% range, according to the report.

More buyers will move off the sidelines and compete for deals, while investors will demand higher returns for riskier assets in less desirable locations, Marcus & Millichap predicts. Initial yields for single-tenant properties in secondary and tertiary markets should settle in the 8% to 9% range this year.

Dallas-Fort Worth made the largest jump in the rankings, up eight spots to fifth. Meanwhile, Tampa, Atlanta and Detroit bottomed out the list.

Top-ranked Houston benefits from its port city status. Tenant demand from port traffic and modest industry growth drove Houston to the top of Marcus & Millichap’s rankings for the second consecutive year. The city’s vacancy rate is expected to dip below the 10% mark by year’s end, recording only one of a few declining vacancy rates nationwide.

However, much like other industrial sectors, Houston’s recovery is dependent on job growth. According to IHS Global Insight, an economic and financial analysis firm, the port city is expected to return to better job levels than other top industrial markets in 2011.

Another metropolitan Texas area has seen its fortunes rise in the industrial sector too as Dallas-Fort Worth cracked the top five of the report’s rankings. Vacancy in the Metroplex is still considerably higher than most top markets, ranging from 12% to 13%, but the rate only slightly exceeds the area’s long-term average. However, demand drivers have moved Dallas-Fort Worth into the top five.

The Dallas-Fort Worth area is positioned to meet future demand with the continued evolution of intermodal facilities at the Alliance Global Logistics Hub and the Dallas Logistics Hub. Employment in the region is expected to pick up by year’s end, with increased industrial leasing activity to follow. Landlords are then expected to rein in concessions.