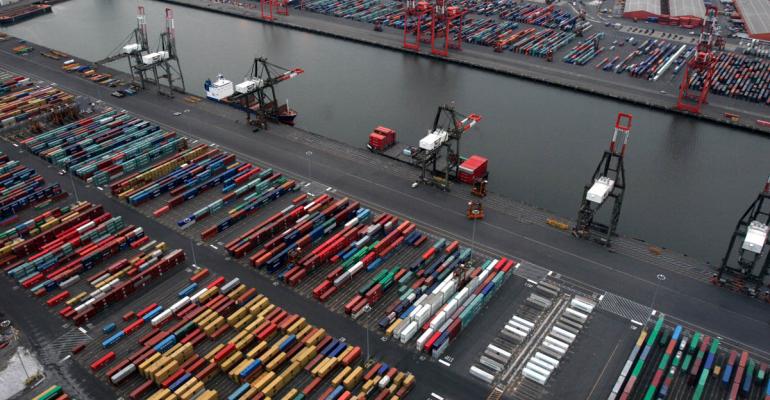 E-commerce growth and port traffic troubles have dominated the news in the industrial sector this year, but a story that has been relegated to the background has been the increasing popularity of intermodal industrial properties. Investors are now collecting premium rents for intermodal properties located near large container-stacking facilities.

The nation’s logistics sector is now facing a perfect storm of individual consumers and businesses increasing orders and the need for deliveries in the absence of enough transportation growth. Large Panamax ocean vessels are now clogging East and West Coast ports with almost four times the delivery levels as a decade before. Dock worker strikes at Los Angeles-Long Beach and trucker shortages have further exacerbated the port back-ups.

As a result, intermodal properties have been expanding steadily to meet new demand. Thirty intermodal parks opened since 2000, with 19 of those opening in the past seven years. Markets with intermodal facilities, including Chicago, Dallas/Fort Worth, Atlanta, Indianapolis and Kansas City, have the highest rent growth, according to a recent report from commercial real estate services firm Cushman & Wakefield. Traffic at intermodal facilities increased by more than 5 percent from 2013 to 2014, according to the Cushman report. According to a Colliers report, intermodal traffic in January 2015 was at about 251,000 containers per week, the highest January average in history.

Jack Rosenberg, national director of logistics and transportation with Colliers, says his team has figured out that if a tenant expects to receive more than 10,000 containers a year, it’s worth it to pay a premium to locate very close to or at the intermodal property.

“Intermodal is strong, it’s getting stronger and it should stay strong for a long time,” he says.

Trucks remain the main pathway for U.S. domestic product distribution. However, hauling across country no longer has the appeal it had in the 1970s, and new electronic monitoring now keeps drivers chained to a fixed schedule, Rosenberg says. “It’s a lifestyle that’s just not popular anymore,” he notes.

Intermodal facilities were at first set up to serve as inland ports for the Midwest, a method to covert containers from rails to trucks, and vice-versa. Chicago, the nation’s largest inland port, has the most intermodal activity. Also, Kansas City has grown into one of the most modern intermodal hubs, with the Kansas City Southern railroad connecting into Mexico. In the first quarter, the new 1,340-acre CenterPoint Intermodal Center-Kansas City recently filled a 300,000-sq.-ft. speculative building with three leases to USDA Animal and Plant Health Inspection Service, Really Good Stuff and UFP Harrisonville. Construction on a second spec building at the park will start sometime by the third quarter, according to a report by real estate services firm Newmark Grubb Knight Frank.

However, new intermodal properties are also being built for short runs along the coasts, or even at the ports to get the freight off ships quickly and to a facility a few miles away. Michael Murphy, chief development officer at Oak Brook, Illinois-based CenterPoint Properties, says his firm has been working on intermodal facilities that serve coastal markets such as Seattle, Atlanta, Norfolk, Va. and Charleston, S.C.

“Just going 200 or so miles was historically too short for railroads to make any money off of freight,” Murphy says. “But by taking on this intermodal work, they’ve been able to create a nice supply chain and take trucks off the road.”