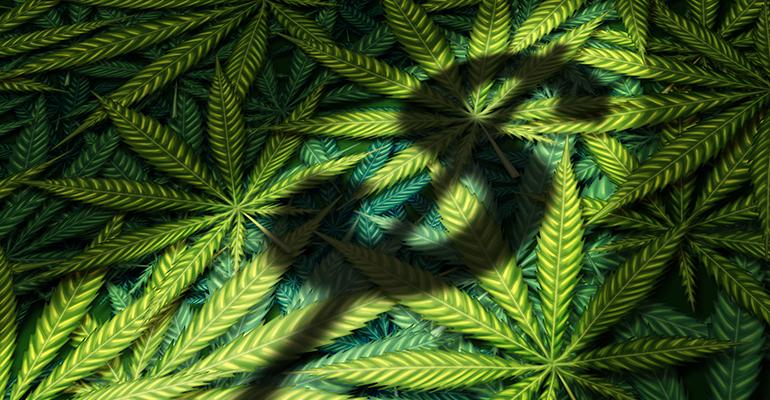 The state of California will begin issuing temporary licenses for “cannabis commercial activity” on Jan. 1, 2018, with permanent licensing to follow within 120 days. This highly anticipated event is attracting private real estate investors from across the U.S. who want to take advantage of the opportunity opened with the legalization of cannabis use in the sixth largest market in the world.

His company prepares applications for cannabis businesses and offers investors access to cannabis real estate financing and assistance in identifying compliant properties. To be compliant, real estate used for dispensaries, for instance, must be located at least 1,000 feet from schools, churches, parks and other dispensaries.

The combined market for legal medical and adult cannabis use is projected to grow by compounded annual rate of 18.5 percent, from $2.76 billion in 2015 to $6.5 billion by 2020, according to a report co-produced by New Frontier Data and ARCVIEW Market Research. That’s not even figuring in revenue from real estate, technology development or the overall economic impact of the cannabis market.

In addition, cannabis commercial activities will add significant revenue to state and local government coffers from licensing fees and other taxes. The state charges a15 percent excise tax on cannabis sales and taxes cannabis cultivation at $148 per lb. for "flowers" (buds) and $44 per lb. for “leaves” (plant trimmings used to produce cannabinoid-based products, such as oil, edibles, bills and vapes.

Local governments will collect sales on cannabis purchases and may impose other taxes, as well, notes Max Mikalonis, legislative advocate for the cannabis industry at K Street Consulting, which provides licensing and real estate compliance advisory services. Local governments are already licensing to cannabis businesses, because the state requires proof the local jurisdiction has authorized the business before issuing a state license.

“Real estate provides a conservative way for investors to participate in the cannabis market without actually ‘touching a leaf,’” says Aaron Hertzberg, a partner and general counsel for Calcannholdings Inc. His company is a cannabis real estate investment firm focused on creating a chain of cannabis dispensaries throughout Southern California. The company is repositioning retail space in compliant locations as attractive storefronts, and is inviting private investors to participate in projects. It currently has two locally licensed dispensaries in Long Beach and is working on others in Los Angeles and Bellflower in Los Angeles County, Santa Ana in Orange County and Lemon Grove in San Diego County.

“We’re seeing a ‘land rush’ for light industrial warehouses,” says Mikalonis. “The biggest demand is for cultivation space. Prices for warehouse space have skyrocketed over the last 12 - 24 months, based on cities going legal.”

Growers in the Bay Area are paying $2 per sq. ft. or more for warehouse space, he adds.

Mikalonis warns growers against signing long-term leases for warehouse space at high rents. Noting that indoor cultivation is power-intensive, he points out that warehouse rents shot up when Colorado legalized cannabis for adult use, but indoor growers lost their shirts when the market was flooded with cannabis and the price dropped significantly

According to Bob Costello, a commercial real estate broker based in Denver, warehouse rents initially escalated four times from what they were previous to Colorado voters legalizing cannabis. He said that Denver— the state’s “pot utopia”— required indoor pot cultivation in areas zoned for plant husbandry. When other states legalized cannabis too, the price of pot dropped from $4,000 per pound to $1,000 per pound, he says. As a result, growers moved their operations into greenhouses, which rent for a fraction of the cost of warehouses, and provide similar growing conditions with less power than indoor cultivation.

The biggest challenge for cannabis real estate investors, notes Hertzberg, is finding capital to finance investments, as federally-licensed banks and institutional capital will not invest in real estate assets used for cannabis commercial activity, because it is an illegal according to federal law.

California state and local governments are currently developing rules for regulating cannabis businesses based on the Medicinal and Adult-Use Cannabis Regulation and Safety Act, which was enacted by the state in June to create one regulatory system for both types of cannabis uses.

All businesses engaging in commercial cannabis activity must secure a license, permit or other authorization from the local jurisdiction, before the state will issue a license.

Obtaining local licenses for dispensaries presents the greatest challenge for the cannabis industry, according to all three experts. Hertzberg says that the dispensary application process is financially risky because it requires a significant upfront investment without certainty of success. This includes the cost of acquiring or leasing a property, architectural fees and non-refundable state and local government application fees, which vary from $5,000 to $50,000.

The uncertainty is due to the limited number of dispensaries cities will allow and varying methods used to approve applications. Licensing may involve a lottery system, majority vote by the city council and/or be based on the application’s merits, Hertzberg says. He notes that Santa Monica will license two dispensaries, Culver City three and Long Beach 32.

Operators usually also incur a fee for a consultant to handle the license application process, which Hertzberg notes involves about 1,000 pages of information about the applicant and proposed dispensary operation, such as proof of financial ability, property description and design plans, fire protection and security plans, and proposed community benefits. Community benefits might include hiring city residents, providing a pharmacist to advise medical marijuana patients about the type of products most effective for their ailments or making donations to local schools or charities.

Los Angeles recently published a draft of rules for regulating cannabis businesses. The draft ordinance sets forth requirements for dispensaries, including hiring local residents, hours dispensaries can be open, where they can be located; records cannabis businesses must keep and the security and fire protection systems they must install.

The LA Weekly reported that the city’s legal dispensaries were supposed to receive licensing priority, but the ordinance fails to meet that obligation. As a result, these dispensaries may have to shut down until they can obtain a license. The city controller recently released a map of 139 “compliant pot shops,” which may indicate a plan to rectify this oversight, noted another LA Weekly report.

Fitzpatrick notes that it will take six to 18 months for Los Angeles to finalize its cannabis rules, because ordinances require two readings, a 60-day public airing, and potentially revisions, before licensing can begin. He believes cannabis operators and real estate investors may flock to neighboring, smaller cities, where voters approved measures that provide greater licensing certainty than in Los Angeles.

Measure X passed by Costa Mesa, Calif. voters, for instance, sets up a straightforward licensing process that does not require city council approval, thereby providing the advantage of a quicker time to market. The measure also offers cannabis manufacturers a Type 7 license, which permits use of volatile extraction methods.