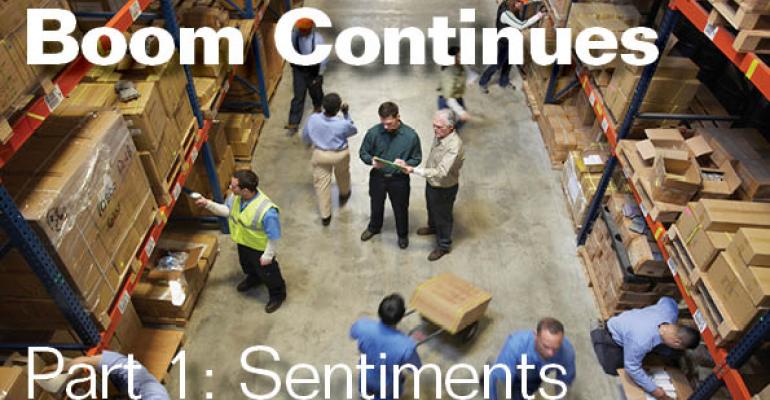 Respondents were asked to rank the relative strength of their region. The South and West each ranked 7.8 on a scale of 10. The Midwest scored 7.0 and the East came in at 6.9.

“The Southeast had been depressed for some time, even before recession. Atlanta, in particular, has had a resurgence as corporate America focuses on their supply chain and where it makes sense to have distribution centers. By pure math, this area was poised to recover exponentially over any other,” says Lynn Reich, SIOR, CCIM, an executive vice president with Colliers Inc.’s logistics and transportation solutions group in Chicago. “The West is always first to recover in the U.S., due to the population centers around L.A. And it is L.A. and Long Beach port activity that drives an enormous amount of product into the U.S.”

Jason M. Crimmins, CCIM, SIOR, president of the Blau & Berg Co. in Short Hills, N.J., sees a simple explanation as to why the East lags other regions. “Long Beach has a vacancy of just over 3 percent compared to our 7.9 percent,” he says.

“A general sense of optimism continues to influence the Southern California industrial market, and there are no signs of abatement within any of the key drivers currently propelling us forward,” says Robert G. Thornburgh, SIOR, CCIM, president of Heger Industrial. “Businesses both large and small have become increasingly more confident about their growth prospects and current demand reflects their attempts to capitalize on new opportunities in the marketplace.”

One of the biggest factors affecting commercial real estate investment is the low interest rate environment that has persisted since the Great Recession. The benchmark 10-year Treasury Rate remains below 2.0 percent.

Next Part 2 of 6: Investment and Finance