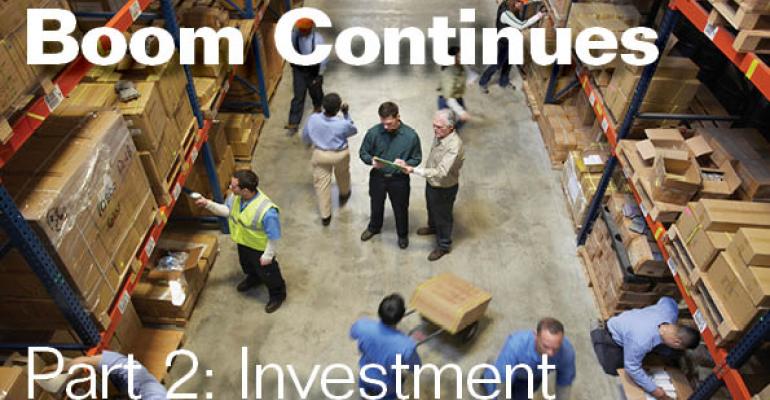 Respondents estimated current cap rates to be about 7.0 percent for all industrial properties. That matches the latest estimates from research firm Real Capital Analytics (RCA), on sales completed through January 2015. On a more granular level, RCA said the average cap rates were 6.9 percent for the warehouse sector and 7.3 percent for flex space.

But that’s a blended average. SIOR experts that NREI interviewed in markets across the country observed that cap rates for prime assets are in the 4 percent to 5 percent range, depending on the market.

“Cap rates for your class-A core product are now 5.5 percent” in South Florida, says Michael Silver, SIOR, a first vice president with CBRE in Miami. “We expect, because of the activity levels and because of the expansion of the Panama Canal and the Miami International Airport, that cap rates will continue to compress and may go down another 50 basis points.”

Steve Kapp, SIOR, a senior vice president with Newmark Cornish & Carey in Hayward, Calif., adds that cap rates for top properties in the Bay Area industrial market are below 5 percent.

“We’re one of the best markets in the country right now,” Kapp says. “At the most aggressive end, cap rates are 4.75 percent down to 4.50 percent for the class-A, long-term, net-leased, warehouse product. At the upper end, properties are ranging in 7.0 to 7.5 range.”

“I don’t know if I see cap rates on the ones that are selling at 4.75 percent to 4.50 percent going down much more,” Kapp says. “I do think there will be some cap rate compression for the properties at the higher cap rates.”

The outlook meshes with the latest results from the NREI/Marcus & Millichap Investor Sentiment Survey. The study measures sentiments across all commercial real estate types. The latest survey, from the first quarter of this year, found investors remain confident in their outlook for industrial properties.

Last year, the industrial real estate sector saw $53.1 billion in deals, according to RCA. That marked a 10.7 percent increase over 2013’s volume of $47.96 billion and was within range of the industry’s peak  between 2005 and 2007, when annual investment volume averaged $56.37 billion per year.

Last year was a big year for equity funds in the industrial sector. Volume from that class of buyers was up 90 percent compared to 2013, according to RCA. Overall, equity funds completed $8.07 billion in acquisitions. However, transaction volume from public (-55 percent) and cross-border (-39 percent) investors dropped. On balance, private investors, at $23.96 billion, accounted for 46 percent of activity in 2014, RCA reported.

Next Part 3 of 6: Development