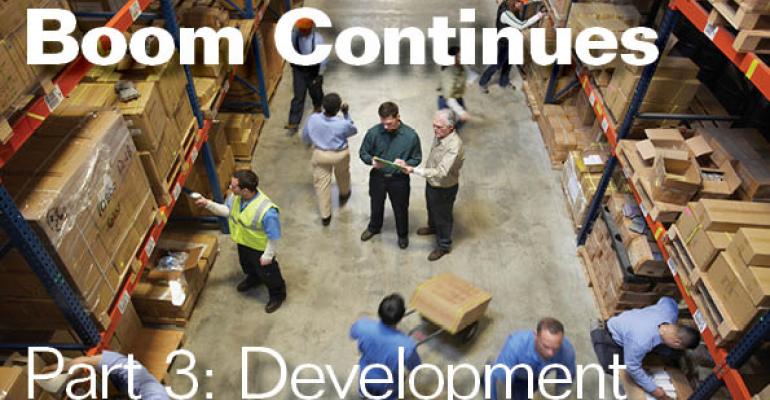 Fundamentals remain strong in the industrial sector and respondents expect them to continue to improve in the year ahead.

The Dallas/Ft. Worth region in Texas tops the country in terms of current development. Overall, there are 63 buildings under construction containing 17.4 million sq. ft., according to CoStar.

“We’ve had a lot of building in the last 24 months. However, the leasing seems to be keeping pace to the point where we are seeing continued increase in occupancy rates,” says Allan Gump, SIOR, CCIM, executive vice president of Colliers Inc.’s industrial division in Dallas and global president-elect of SIOR.

Philadelphia boasts the second-greatest volume of activity with 16.7 million sq. ft. currently under construction. Atlanta, California’s Inland Empire and Chicago round out CoStar’s top five. Notably, in both Dallas (38.8 percent) and the Inland Empire (18.6 percent), less than half of the space under development is pre-leased. The national average is 46.8 percent, according to CoStar.

“Typically, within six to nine months the buildings are getting leased,” Gump says. “The North Texas region is extremely strong. Texas is now considered one of the locations where you can have a distribution center, even if you’re only having a few distribution centers.”

“Spec development is occurring mostly in 500,00 sq. ft. and below market [in Chicago],” Reich adds. “The absorption has been okay, but Atlanta, Dallas and Southern California are ahead of Chicago in that regard. We probably have the right amount at this point.”

In the Northeast, Crimmins thinks spec development may be too aggressive and the level of overall development “moderate.” The net result of this is “the amount of new deliveries will flatten the vacancy rate,” he says.

In Miami, an unusual factor is driving development: new regulations allowing for the import and storage of perishables. In the past, certain perishables from Latin American countries were required by law to go to facilities in Philadelphia to prevent potential spread of medflies. Recently, the Port of Miami and Miami International Airport conducted successful pilots of cold treatment plants.

“This will allow the containers from Peru, Chile and Argentina to bring grapes, pears and other fruits and vegetables into South Florida,” CBRE’s Silver says. “This will cause a huge increase in containers that are coming in to the port. The bottom line is that the market needs millions of square feet more of warehouse space to accommodate additional fruits and vegetables and produce, and many buildings will require refrigeration and cooling to house these foods.”

Another driver of development is the need for state-of-the-art buildings meeting modern design and efficiency requirements.

“From a physical construction standpoint, you’re looking at buildings that are more seismically sound, which in California is a big deal,” Kapp says. “There are also bigger clear height requirements—you need 32 ft. minimum, up to 35 ft. And there are more energy-efficient systems and larger truck court and staging areas.”

An additional factor affecting supply in some markets is the conversion of old industrial boxes into other uses. Overall, 64 percent of respondents said that this activity is taking place in their markets. The net effect of this activity varies.

Of respondents that said this activity is occurring, 53 percent believe it’s leading to a lower inventory of available space in their market. One-third of respondents said the removal of old space is being balanced by new construction. Additionally, 14 percent said that new construction is outpacing the removal of old space, leading to a net growth of inventory in their market.

Next Part 4 of 6: Leasing and Absorption