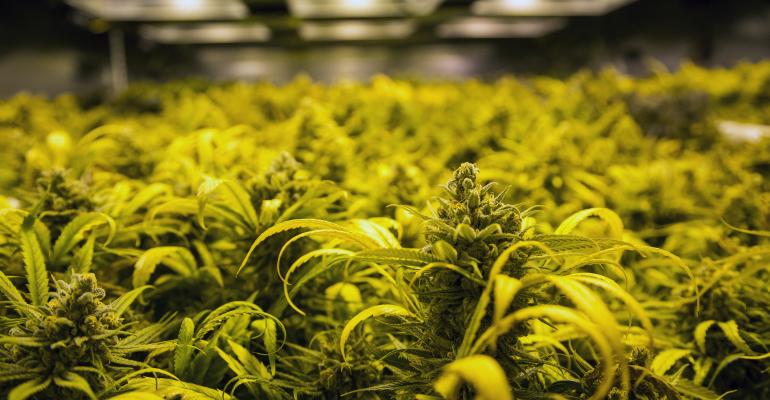 Pot Warehouses Are Going Through a Boom

In areas where growers and related businesses can get licensed there&rsquo;s now a land grab and a willingness to pay a premium for assets.

With voters approving marijuana ballot initiatives in November, it is now legal for recreational and/or medical uses in 28 U.S. states. States legalizing marijuana for medical use only allow use in forms other than the flower and license a limited number of dispensaries.

Maryland, for example, has only 100 dispensaries statewide, fewer than the number of dispensaries in Los Angeles alone, according to Lori Glauser, COO at Signal Bay Inc., a marijuana business advisory and testing firm based in Oregon.

In states legalizing marijuana for recreational use, local governments can opt out or establish their own rules for cannabis-related operations, including where it can be cultivated, tested or transformed into various products.

When Colorado voters approved marijuana for recreational use, Denver— the state’s “pot utopia”—required that pot cultivation and manufacturing be done in enclosed spaces in areas zoned for plant husbandry, says Bob Costello, a commercial real estate broker based in Denver. He notes that this initially caused a spike in warehouse property values in pot-growing zones and rents escalated up to four times what they were previously.

With marijuana now legal in a number of states, the price of pot has dropped from $4,000 per pound to $1,000 per pound, Costello adds, so growers have moved their operations to greenhouses, which rent for a fraction of the cost of warehouses, or are growing their crop outdoors in southern Colorado.

In states where voters approved recreational marijuana use in November—California, Nevada, Massachusetts, and Maine—the industrial real estate sector focusing on marijuana production is currently in the early-stage Colorado model, with investors rushing to buy up industrial properties in cities that allow pot-related operations, causing values to skyrocket.

In Costa Mesa and Santa Ana in Orange County, Calif., which opted to permit marijuana-related business operations because of overwhelming approval by local voters, industrial property values have nearly doubled over the last 12 months, says Jim Fitzpatrick, a former Costa Mesa planning commissioner who now heads Solutioneers, a consulting firm that provides compliance and land use services to cannabis firms.

In areas where growers and related businesses can get licensed there’s now a land grab and a willingness to pay a premium, he adds, noting that in Costa Mesa and Santa Ana the only restrictions are that these operations must be in areas zoned for industrial use and at least 1,000 feet away from residential areas, schools, daycares and nursing homes. “As other cities get onboard, demand will go down, and prices with it,” Fitzpatrick says.

He predicts that Orange County cities with structural budget deficits, including Stanton, Fountain Valley, Lemon Grove and Westminister, will opt in when they see sales tax revenues collected by cities that already allow marijuana businesses. Fitzpatrick notes that tax revenue collected by Santa Ana for a partial year (December 2016 through June 30, 201) is expected to reach $$2.9 million.

“What’s driving this industry is a quest to achieve regulatory approval at the local level, be the first the first in line to apply at the state level,” Fitzpatrick says, adding that the state is expected to issue licenses sometime in 2018.

Growers are focusing on the hybrid greenhouse-warehouse space model and retrofitting existing buildings, he notes. “Right now it’s all about getting out of the gray market and into the regulated market. They will take less than the ideal space and scale it later.”

According to Glauser, the transition to a regulated marijuana market is impacting industrial space all over California, from San Diego to Humbolt—California’s traditional pot-growing mecca—with obsolete and abandoned industrial buildings retrofitted as move-in-ready pot gardens, testing labs, eatable kitchens or manufacturing facilities to extract oils for medicinal uses or manufacture other products, like creams.

She points out that industrial spaces with low ceilings are ideal for growing pot, but old facilities must be upgraded to meet the water and energy requirements of cannabis cultivation, which can draw up to 1,200 amps to power lights and HVAC and ventilation systems to cool the environment and bring in fresh air.

In fact, two REITs have been established to focus exclusively on the cannabis industry: San Diego-based Innovative Industrial Properties (IIPR), a publically traded REIT on the New York Stock Exchange, and Kalyx Development, a private New York-based REIT with more than 600,000 sq. ft. of industrial space under management.

More cities are getting onboard with the cannabis industry because it is an economic driver that not only generates tax revenue for city coffers, but also provides well-paying jobs, Glauser notes. Additionally, cannabis retailers that are seeking acceptance in communities are trying to demonstrate that dispensaries are not scary places by investing in high-end storefronts. This, in turn, is helping to revitalize deteriorating commercial districts by encouraging other retailers to improve their own storefronts.

Capital to create space for cannabis-related businesses is almost always provided by private investors. That’s because most banks will not finance such properties since cannabis is still an illegal drug under federal law. Even if a bank does finance an industrial building occupied by a cannabis business, it will not finance the premium paid for a building in a marijuana-friendly location. For example, Fitzpatrick notes that if an investor pays $1.5 million for a building valued at $1 million because it is in a jurisdiction that allows cannabis-related businesses, the bank would only finance $800,000 based on 20 percent leverage.

Since 2014, the Rohrabacher–Farr amendment, which prohibits the Department of Justice and the Drug Enforcement Agency from spending funds to interfere with the implementation of state medical marijuana laws, has protected states and the cannabis industry from federal legal intervention. But since Rohrabacher–Farr is a budget amendment, it must be approved by Congress annually along with the federal budget, Fitzpatrick notes.

With the new Administration and Jeff Sessions as U.S. Attorney General, he suggests that Rohrabacher–Farr could be at risk. When it comes to the marijuana industry, Fitzpatrick says, “Sessions is naïve and oddly so.”

With the risk of federal intervention, Costello notes that in Colorado it has become somewhat of a standard for landlords to add a clause stating that if the landlord or tenant receives a letter from the federal government demanding that the tenant cease operations, the landlord agrees to hold the lease null and void with no penalties and allow the tenant to vacate within 30 days. Another, less-used clause makes the landlord responsible for the $600,000 approximate value of a full crop in the event of federal intervention.

In the original article, Lori Glauser's and Jim Fitzpatrick's names were misspelled. They have now been updated. The article also stated that the state of Maryland has only 10 dispensaries, when the number is actually 100.
TAGS: News
0 comments
Hide comments
Related
Sponsored