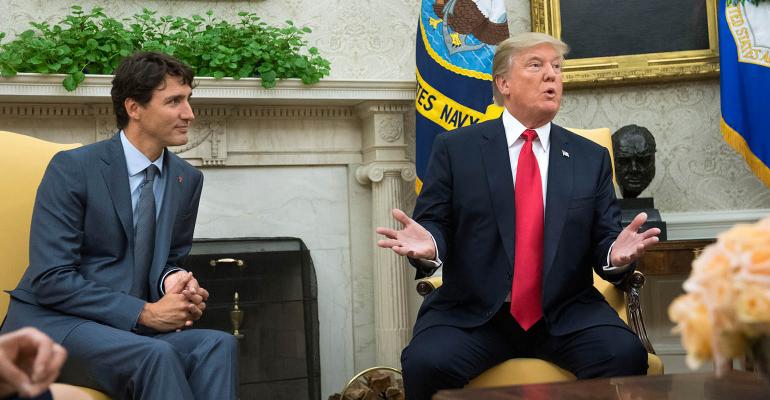 What Do NAFTA Negotiations Mean for Industrial Real Estate?

President Donald Trump recently called the North American Trade Agreement (NAFTA) the "worst trade deal in history” and said he would renegotiate or dissolve it. He also discussed the possibility of slapping a 35 percent tariff on Mexican-made products imported to the United States.

These remarks were made during Canadian Prime Minister Justin Trudeau’s visit and as the fourth round of NAFTA talks got underway. Trump contends that the U.S. and Canada will be fine without NAFTA, and has indicated he would pursue a separate trade deal with either Canada or Mexico if his administration couldn't reach a deal with both nations.

NAFTA essentially eliminated tariffs on products moving between the U.S., Canada and Mexico. Since it became law in 1994, the economies and logistics/supply chain of NAFTA nations have become interconnected, and interdependent, notes Jason Tolliver, vice president and expert in industrial real estate with real estate services firm Cushman & Wakefield. The complexity of these supply chains makes it virtually impossible to dissolve NAFTA without a tremendous drag on the economies of all three nations, he adds.

NAFTA logistics activity has generated tremendous capital investment in U.S. industrial real estate over the last 20 years, especially along logistics/supply chain corridors and demand for space should continue to grow, Tolliver adds. But he notes that uncertainty is beginning to impede investment in this sector, as well as economic growth, which is why it’s important to get clarity on NAFTA.

David Bitner, Cushman & Wakefield’s senior researcher with the capital markets group, notes that more than 410,000 U.S. companies, including companies with less than 500 employees, are now engaged in international trade. As a result, warehouse stock has increased by 3.5 billion sq. ft. since NAFTA became effective.

Products assembled and made in Mexico contain parts manufactured in the U.S. or elsewhere, according to Tolliver, and often move back and forth across the U.S.-Mexico border two, four or six times before being completed, with value added at each stop. The economic impact of this activity, known as cross-hauling, has created jobs on both sides of the border, which is why Bitner believes Trump’s comments are just bluster and not credible. “Pulling out of NAFTA would be a self-inflicted wound to the U.S. economy,” he says. He adds that the complexity of the supply chain makes it difficult to model what would actually happen if this occurred.

Meanwhile, Trump’s proposed 35 percent tariff on goods entering the U.S. from Mexico is incompatible with cross-hauling, Bitner adds. If this tariff is applied every time a product crosses the border, American consumers could not afford to buy them, he notes.

While imposing a tariff on goods imported from Mexico would have a negative impact on that nation’s economy, Tolliver says Mexico could survive it over the long term as its economy adjusts to a new normal, as its economy is growing. The biggest losers would be consumers in all three countries, because the cost of the tariff would be passed on to them.

In fact, it is conceivable that an even greater share of automotive manufacturing would have moved offshore had it not been for the cost advantages that NAFTA afforded U.S. automakers, Kemmsies says. He warns that a huge tariff on imports could be counterproductive for the U.S. economy. For example, automakers, which manufacture inexpensive, compact cars in Mexico to hold down costs, could discontinue making them if the added cost of the tariff makes these autos unmarketable in the United States.

NAFTA negotiators should be focused on reducing the trade deficit by negotiating terms that would open up Mexican and Canadian markets to more U.S. goods and services, not on pulling out of the agreement, Kemmsies notes. He suggests that this needs to happen or Trump’s threats could come to pass. “The U.S. economy would feel the impact of a growing trade deficit.”

Many updates to NAFTA were agreed upon during the first four rounds of negotiations. The next “Three Amigos” trade summit is scheduled for Nov. 17 in Mexico City, but agreement on the remaining “bones of contention” will likely carry over into next year, Tolliver says.

NAFTA’s main “sticky pain points” include a U.S.-proposed sunset rule that would require NATFA to be revisited or updated every five years, he notes. NAFTA partners are not the only ones that oppose this idea. American companies like the certainty, are accustomed to current rules and want the rules in play on automatic, Tolliver says.