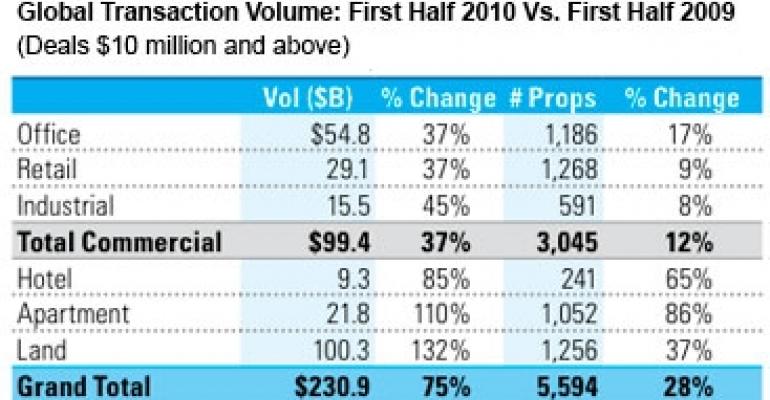 Global Property Sales Soar in First Half of 2010 as U.S. Deals Rebound

A new report on global commercial property transactions shows that sales of major properties valued at $10 million or more surged in the first half by 75% compared with the same period in 2009.

Through the end of the second quarter, 2010 sales reached $231 billion, according to the report issued today by New York-based research firm Real Capital Analytics (RCA). That figure is 75% higher than a year earlier and includes the apartment, retail, office, industrial and hotel sectors.

Commercial property sales in top U.S. markets such as Washington, D.C., New York and San Francisco helped drive the global momentum and a 21% increase in transactions within the Americas from the first quarter to the second, according to RCA.

“Activity in the Americas really exploded,” says Dan Fasulo, managing director at RCA. “It makes sense in that the U.S. has been two to four quarters behind Europe and Asia with recovery.”

The biggest buyer in the Americas in the first half was Denver-based Dividend Capital Total Realty Trust, a non-traded real estate investment trust that spent $1.3 billion on a portfolio from iStar Financial (NYSE: SFI). The portfolio included 32 office and industrial properties in 16 U.S. markets.

The number of properties trading in the Americas rose by just 12%, however, indicating that the transactions taking place this year have been significantly larger than last year — a sign of an improving marketplace, RCA reports.

Although the year-to-date sales increased dramatically over the same period in 2009, the pace of global sales in the second quarter slowed from the first quarter of this year. One reason for the slower pace in the second quarter was uncertainty over prices, says Fasulo. “Investors are digesting the new price levels,” he says.

The six-month transaction figures are a strong showing, even though they do not rise to the level of pre-recession sales, says Fasulo. As the market attempts to return to the earlier pricing levels, it needs to digest some of the overhang of properties still unsold. Fasulo foresees strong sales for 2011 and 2012.

“The year-over-year figures are very bullish. Barring another slowdown in the world economy, the global markets are well on their way to recovery.”