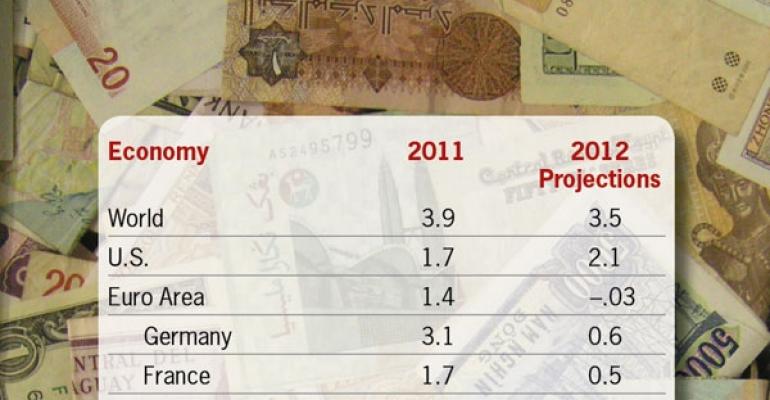 The economic drama playing out in Europe over the past two years appears to be getting worse not better. Eleven European countries, including the United Kingdom, are now officially in recession. There also are continued fears that struggles in the hardest hit countries such as Greece, Spain and Portugal, will drag down other economies.

“There can be no doubt that the current economic turbulence in Europe has impacted retailer strategies,” says Bryan Roberts, Director of Retail Insights at Kantar Retail in London. Expansion plans are generally on hold across Southern European countries such as Spain and Greece, and the austerity measures enacted by various governments will have dissuaded some international retailers from entering those countries where the economies are struggling, he adds.

“Things in Europe are very uncertain right now in terms of how all of these austerity measures are going to play out,” agrees Ann Natunewicz, national manager of retail research at Colliers International in Washington, D.C. The big short term issue is that people are spending less. “Retailers are less likely to want to open stores in the peak of a recession. So there are clearly delayed expansion plans in those areas that are most directly affected,” she says.

The European economy is expected to shrink by 0.3 percent this year, according to the World Economic Outlook Update released by the International Monetary Fund (IMF) in mid-April. The IMF is projecting that the global economic output will increase 3.5 percent in 2012, which is slightly higher than the 3.3 percent forecast that it delivered in January. The IMF cites a potential spike in oil prices and an escalating crisis in Europe as the two main risks facing the global economy. Recent negative news coming out of Europe begs the question whether the IMF will have a more pessimistic view of global growth in its next economic update, which is due out later this summer.

Despite the economic uncertainty, retailers are continuing to move forward with international expansion both in Europe and around the world. Whether or not the European Union disintegrates or some countries decide to leave the Euro, there is going to be an extended period of economic hardship across the region. That being said, developers, investors and retailers are in this business for the long term. “No matter how much noise there is right now, it is still noise, and you have to be focused on the future,” says Natunewicz.

Demand remains high for top tier high streets and high rent districts across Europe, such as Bond Street in London or Champs Elysées in Paris. For some, the broader economic woes in Europe are producing new opportunities to find desirable real estate. Average rental rates are down in European markets such as Lisbon, Athens, Rome and Milan and flat in most of Germany, notes Natunewicz. “So, if you’re a retailer that wants to get into those spaces and there happens to be a space open, you have more leverage to lock in at a lower rate,” she adds.

There is some anecdotal evidence that South America and Central America are benefitting from the trouble in Europe. “The Latin American economies are doing extremely well,” says Natunewicz. Countries such as Mexico and Brazil, for example, are open to foreign investment. In addition, the region has a young population base that wants to spend and is hungry for both European and U.S. brands.

Even before the liquidity crisis hit, Europe was battling a demographic shift with an aging population. “So longer term, retailers are looking to markets such as South America and China where there are more people who want to consume their product,” says Natunewicz.

Retailers clearly are attracted to the growth potential of emerging markets in Eastern Europe, Asia and South and Central America. However, these regions have their own macroeconomic and political challenges. Political unrest has made some retailers exit Egypt and corruption has discouraged a number of operators from entering markets such as Russia, notes Roberts. “Being a large and high growth market is not necessarily a big enough incentive to overlook an unstable political climate or dubious regulatory environment,” he adds.

The state of the world economy will be the subject of the Setting the Tone; How Macroeconomic Conditions and Politics Affect Our Industry Globally quadrant at the ICSC Retail Real Estate World Summit.