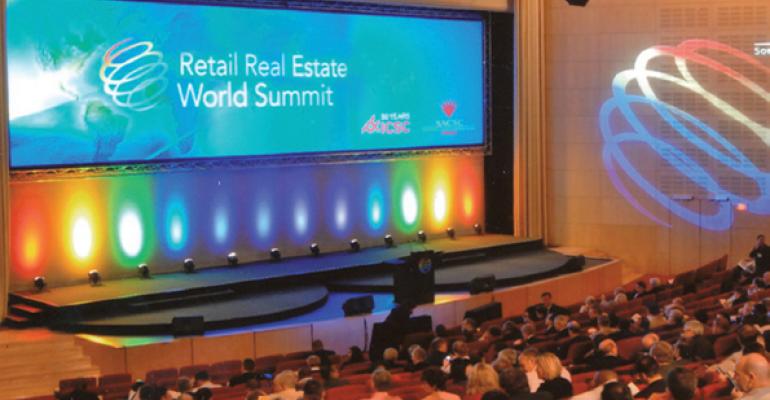 More than 1,000 registered attendees from around the world will converge in Shanghai next week for the 2012 ICSC Retail Real Estate World Summit.

More than 70 speakers around the globe from companies ranging from Apple and Walmart to India-based K Raheja Corp. will be discussing the latest trends transforming the international retail real estate industry. The industry conference is being held at the Shanghai International Convention Center on Sept. 11-14th.

The program agenda reads like a who’s who list of the global retail industry, with participants from all regions of the globe and all segments of the industry including retailers, developers, investors and third party consultants.

“We always aim for this to be a very high-level meeting, but what the team has been able to put together this year in terms of the speaker line-up is pretty remarkable, especially from people within the industry,” says ICSC spokesperson Jesse Tron.

The Right Honourable Brian Mulroney, former Prime Minister of Canada, will be the keynote speaker. In addition, Steve Wozniak, co-founder of Apple will be sharing his insights on the retail landscape. Do Won Chang, CEO & Founder of Forever 21, also will discuss his views on international expansion. On the development side, industry leaders such as Peter Lowy, co-CEO of The Westfield Group, and Seck-Guan Pua, CEO of Singapore-based Perennial Real Estate Pte., will be speaking about the globalization of the shopping center industry.

Given the high caliber line-up of speakers, it is difficult to single out any one presentation or panel discussion, notes Tron. “They are all so good. The real gist of this meeting is precisely for this—the speakers and the panels, and to be able to hear from the top of the top in terms of the industry,” he adds.

And the conference will offer more than just the big names. “While there are several excellent presentations in a well-structured program, including those by Steve Wozniak and Brian Mulroney, the highlight for me at the World Summit will be the networking opportunities between industry leaders from all continents,” says Mike Rodel, COO of the Rebosis Property Fund in Johannesburg, S.A. and summit co-chair.

Zeroing in on industry trends

Although ICSC typically hosts a variety of regional conferences each year, such as ReCon Asia and Recon US, the World Summit is an event that is held every four to five years. The intent of the conference is to focus on some of the dynamic industry trends impacting the retail industry on a global level. For the 2012 Summit, the ICSC is examining five overarching topics that include:

The growing middle class in emerging markets is creating new retail opportunities in markets such as China, Brazil, India and Russia. At the same time, the slower growth in mature markets—and continued volatility across much of Europe—is encouraging retailers to seek out new growth opportunities in new markets.

From a macro standpoint globally, there have been many areas around the world that have been impacted by the recession. Certainly, that has been true of the U.S. and Europe. “We went through a tough time, and the retail industry wasn’t immune to that,” says Tron. In mature markets, there is not a lot of new ground-up retail space being built today. However, that slowdown has helped to divert development into new opportunities in emerging markets. “The conference will look at how you as a retailer, or a developer, or a landlord are going to position yourself to take advantage of that shift,” he adds.

Cross-border retailing is front-and-center on the agenda. The conference features a host of retailer panelists from companies such as Giordano International in Hong Kong, U.S.-based firms such as Macy’s and Nike, Kidzania in Mexico City, and List Fashion Group from Rome. Panelists will be discussing topics ranging from growth potential in those emerging markets, to what real estate opportunities exist for new stores.

Retailer expansion is piquing both developer and investor interest. Overall, more investment capital is flowing to emerging markets. Last year alone approximately $400 billion was made available ad direct investment in commercial real estate markets around the world, according to the ICSC. Real estate is an attractive investment option for those investors who want to make a long-term investment and like the stability that real estate typically offers. Industry experts from firms such as Pramerica Real Estate Investors (Asia), Commerz Real AG in Germany, Taubman Asia and U.S.-based Prudential Real Estate Investors will offer their insights on where capital is flowing.

In addition to the core topics discussed, the World Summit will delve into a number of related subjects, such as current views on the global economy and the role that public space will play in future developments. Technology also promises to be one of the hot topics at this year’s conference. “The World Summit has a very strong focus on networking and hearing from an education perspective from the top people in the industry,” says Tron. “So in my opinion, there is not a session that you should miss.”