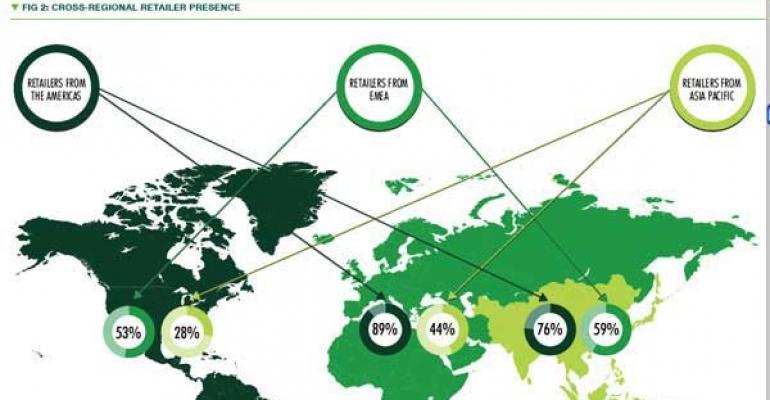 Retailers are continuing to march across the globe in their quest to reach new customers.

International retailers grew their global real estate footprint by 2.1 percent in 2011, according to a CBRE retail report that was released last week. “In the context of a difficult economic climate throughout much of the world, that was a positive result,” says Neville Moss, head of retail research for the Europe Middle East and Africa (EMEA) region at CBRE in London.

Retailers from across the Americas expanded the most, growing their global space by 3.6 percent last year. Asia Pacific retailers expanded by 2.7 percent in 2011, while EMEA retailers increased their international presence by 1.5 percent, according to the CBRE report, which surveyed 326 leading retailers from 73 countries.

Slow growth in home markets is forcing some retailers to move beyond their own borders to tap new business opportunities. That is especially the case for U.S.-based retailers who have saturated much of their domestic market. Hollister, Apple, Michael Kors and Forever 21 are just a few of the retailers that have stepped up international expansion efforts. Fashion retailer Forever 21, for example, opened new stores in the U.K., India, Austria and Belgium in 2010 and 2011, and has further plans to open stores in France, Italy, Germany and Spain.

In fact, American retailers are proving to have the biggest appetite for global expansion. U.S. retailers represent the majority of this group, which also includes firms based across North, Central and South America. Nearly three-fourths of the American retailers surveyed, 73 percent, currently have a presence in all three regions—the Americas, EMEA and Asia Pacific—compared to 44 percent of EMEA-based retailers and 23 percent of retailers from Asia Pacific with a presence in those three regions.

Specific strategies for global retail expansion vary widely. Some retailers are more comfortable targeting mature markets in developed countries. Hubs such as London, Dubai, New York, Moscow and Paris have had the most success in attracting the largest volume of international retailers.

Emerging markets are another prime target for retailers. Brazil, India and China continue to garner attention due to the size of their economies and their growing middle class consumers. However, the most active country for international expansion in 2011 was Kazakhstan with 18 new retailers entering the market last year, according to CBRE. That expansion follows on the heels of the 2010 arrival of Inditex, which is one of the world’s largest fashion distributors. Other top markets around the globe for new international expansion included Russia, with 11 new entrants to the market, as well as Vietnam and the Ukraine, both of which saw nine new retailers enter the market last year.

The e-commerce revolution is making it easier for retailers to cross borders. Many retailers are using Web sites to test the waters of new markets before opening actual brick-and-mortar stores. “So, consumers in different countries can be aware of new brands before they even arrive,” says Moss.

Global retail expansion is expected to continue on a steady path in 2012. There are still many untapped markets around the world. China, for example, has experienced international retail expansion among its tier one cities, but that expansion has yet to trickle down to its second and third tier cities. “There are a lot of spots around the globe that are growing fast economically and present good opportunities for retailers—if they can find space that works,” says Moss.