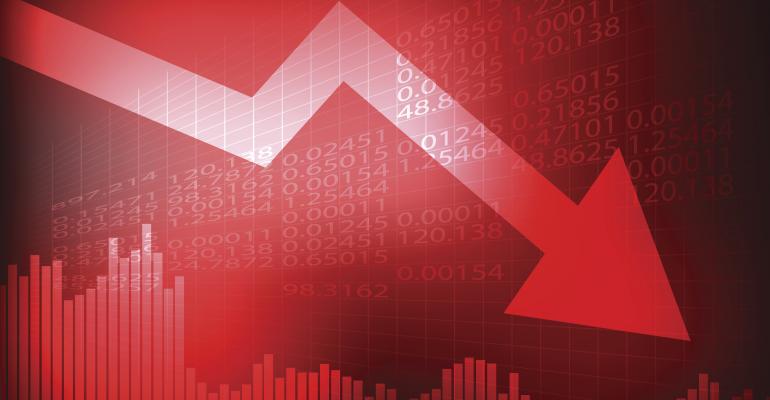 Monthly deal volume for November 2017 was down 31 percent year-over-year, with $27.9 billion in transactions, according to RCA.

Heading into 2018, there may be some bright spots for the investment sales market, even as total transactions dipped last year, according to a recent report from New York City-based research firm Real Capital Analytics (RCA) and figures from research firm CoStar.

Monthly deal volume for November 2017 was down 31 percent year-over-year, with $27.9 billion in transactions, according to RCA. Only the hotel sector saw a year-over-year increase in sales volume in November at 3 percent, while the remaining core property sectors experienced double-digit declines. Industrial was the only sector that posted growth in deal volume overall year-to-date through November.

According to CoStar data, transaction volume in November dipped to $39.2 billion, marking a 22 percent year-over-year decline, says Justin Bakst, director of capital markets at the firm. It appears that when the final numbers are tallied, the fourth quarter of 2017 will end up being the weakest for deal volume since the first quarter of 2014—notable since typically, the final months of the year bring an increase in commercial real estate investment sales, Bakst adds.

There remains a disconnect between deal volume, which has generally been down with the exception of the industrial sector, and prices, which continued to trend up, says Jim Costello, senior vice president at RCA. Cap rates on multifamily assets are also 70 basis points lower than their long-term average, and the office assets in Central Business Districts (CBDs) are trading at rates 60 basis points lower than average, according to the RCA report.

Over the past 36 months, investors focused on long-term holds acquired many core assets, says Steve Pumper, executive managing partner at real estate services firm Transwestern, leaving fewer properties available for sale and leading to investors taking more care in deciding where to next deploy capital to get the best returns. “People are trying to be thoughtful as we get later into the cycle,” Pumper notes.

The retail sector continued to struggle in the third quarter of 2017—and those challenges will likely not go away any time soon, Costello says. In the third quarter, prices in the sector increased by 2 percent year-over-year, a sign that interest in the sector is slowing. CoStar also attributes the drop in overall investment sales to the retail sector, where transaction volume was down 20 percent in November compared to the previous month, Bakst says.

However, the sector may not be as badly damaged as it appears, says Robert Griffen, U.S. head of capital markets for real estate service firm Newmark Knight Frank. For both the retail and suburban office sectors, there can be great opportunities—if one is willing to do the work. “I think there are lots of great opportunities that are overlooked,” he notes.

Overall, there was uncertainty in the real estate industry in late 2017 that could have contributed to the slowdown, particularly related to President Donald Trump’s tax reform package and the appointment of a new Federal Reserve chairman, Bakst says. While these changes appear to be positive in the long run for commercial real estate, there may be some short-term drawbacks and a dip in year-over-year volume for the first quarter of 2018, he notes. “If you look at what the drivers are, clearly uncertainty is going to drive a slowdown in transaction volume,” Bakst says.

Meanwhile, secondary markets—where investors may see a higher return in the near future—may also provide new opportunities for investors in the new year. There are several secondary markets, such as Salt Lake City and Detroit, that now have higher liquidity scores than they have historically, according to RCA’s metrics. However, Costello says caution should be taken when entering a market with more liquidity than normal—and potentially getting stuck in the future. “Those secondary markets can provide an opportunity,” he notes. “But those people need to cherry pick.”