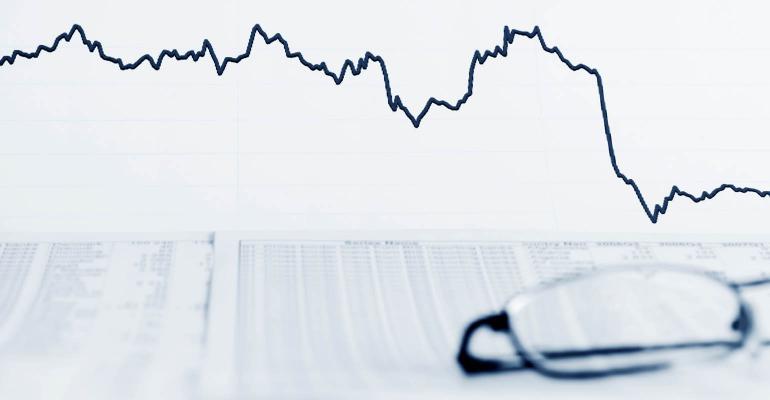 The underwriting process is taking longer, as no one wants to make any mistakes, according to Jim Costello, senior vice president of Real Capital Analytics.

Investment sales volume continued to fall in July, the most recent month for which data is available, as property prices rose, according to recently released data.

Meanwhile, the RCA all-property commercial property price index (CPPI) rose 1.2 percent from June to July, with all sectors seeing gains. From one year prior, the index has risen 7.9 percent.

Investment sales volume tracked by research firm Costar totaled approximately $36 billion for July, down 23 percent year-over-year. That’s down from historic highs of about $52 billion in July 2015 and $47 billion in July 2016, according to Costar data. Year-to-date through July investment sales volume came in at close to $302 billion, approximately a 12 percent fall from 2016, CoStar reports.

According to RCA, year-to-date volume is down 10 percent compared to the same period in 2016.

It’s is not a big secret that deal volume continues to fall year-over-year, according to Jim Costello, senior vice president of RCA. However, Costello says he has noticed now “a different set of behaviors on the part of investors.”

There has been a “couple years of excessively high investment,” Costello notes, where it was easier to bring buyers and sellers together. Both interest rates and cap rates were falling, and deals were easier to close.

Today, the negotiation process is tougher, Costello says. The underwriting process is taking longer, as no one wants to make any mistakes.

“Now you have to be right on everything,” Costello says. “You can’t make mistakes there. That makes this harder for a potential buyer to step up to what the seller wants.”

The report notes that the volume total of $26.5 billion is average for July: Since 2001, the mean deal volume for the month has been $24.7 billion, according to the report, which analyzed sales of properties worth $2.5 million and greater.

The office, retail, apartment and hotel sectors saw declines in deal transactions. The only sector that saw a jump in deal activity was industrial—a 10 percent increase year-over-year. However, if not for the Ivanhoe Cambridge acquisition of Evergreen Industrial Properties—a light industrial real estate specialist with over 150 properties comprising about 16 million sq. ft.—sales volume in the industrial sector likely would have dropped 12 percent compared to July 2016, according to the report.

There is a unique reason behind the sector’s growth, Costello says. It is clear that the shift from brick-and-mortar retail stores to online shopping has led to a rising need for logistics facilities around the country. However, the growth in industrial sales appears to mostly be the result of bigger portfolio sales, he says.

For logistics facilities, it is often difficult to buy one building at a time compared to multiple properties at once. “I think that might be slowing single-asset sales,” Costello says.

Though such “megadeals” may have provided a helpful boost for the industrial sector, the same is not true for July’s total growth. Overall, portfolio and entity-level deal volume dropped 21 percent year-over-year. Meanwhile, single-asset sales also took a hit, declining 30 percent year-over-year, according to the report.

Despite the continual decline in deal activity across all property types, Costello says there is no room for concern—a sentiment he has been expressing for months. This is because prices overall for the month, across all sectors, continued to increase slightly, according to RCA’s figures.

Meanwhile, looking at the month of August, a report from online real estate marketplace Ten-X showed that property prices dipped 0.1 percent for the month, marking the fourth drop in a row for the Ten-X price index.

Even though year-over-year the index is 5.8 percent higher, Peter Muoio, chief economist at Ten-X, says momentum is running out. Those gains stemmed more from deals negotiated at the end of 2016 and early 2017, he says.

He attributes the slowdown to a post-election effect: After the U.S. presidential election in November, interest rates rose, then evened out. Now, some deals are being recalibrated. Out of all the property types Ten-X tracks, the office sector observed the biggest price jump in August of 1.6 percent. But Muoio cautions against throwing any weight behind this figure, suggesting this may be statistical noise. “I wouldn’t sort of put a lot of credence into it,” he says.

The Ten-X data showed that for the second month straight, prices in the apartment sector dropped—this time by 0.6 percent—which Muoio attributes to the post-election effect. However, overall, prices for the sector are up 9.6 percent from last year.

“While other property segments have shown weakness in this period since the election on and off, the apartment segment was the standout in not showing that,” Muoio says. “What I find interesting is that in the end, nothing defies gravity.”

The Ten-X data also showed that prices in the industrial sector edged 0.4 percent lower from last month—the sector’s third dip in four months. Even though there are a lot of positive aspects to the sector, it is still not immune to the macro forces affecting the commercial real estate industry as a whole.

The uncertainty the industry is facing in regards to national policy issues like tax reform is still out there, according to Costello. However, he adds that it is possible that now that summer is unofficially over, some clarity may begin to emerge.