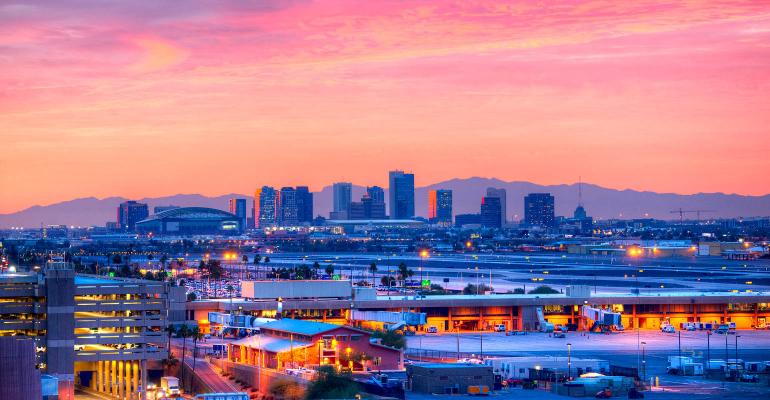 “There are certain markets that are still nowhere near that previous peak,” says Jim Costello, senior vice president at Real Capital Analytics.

Property values have surged steadily higher in the prolonged recovery. But that high tide isn’t raising all boats as some metros are still falling short of 2007 pricing.

The broader commercial real estate market has regained and surpassed values that existed at the prior peak. The major metros have seen the biggest bounce with values that are 52.5 percent higher than a decade ago, while the rebound has been more modest in non-major metros at 10.8 percent, according to the CPPI produced by Real Capital Analytics (RCA), a New York City-based research firm.

“There are certain markets that are still nowhere near that previous peak,” says Jim Costello, senior vice president at RCA. The firm’s researchers estimate there are still more than a dozen markets where property values are below 2007 levels. Las Vegas tops the list of laggards with average values across property types that, as of July, are 34.3 percent lower than they were 10 years prior. Other metros still battling a steep decline include Orlando, Fla. at 24.9 percent; Sacramento, Calif. at 24.4 percent; Fort Myers/Sarasota/Naples, Fla. at 21.8 percent and Phoenix at 18.4 percent.

Metros where values were driven by the housing boom, such as Las Vegas, Phoenix and parts of Florida, are still feeling the negative impact of the housing bust. The local economies don’t have the same “juice” as they did before, which has a ripple effect on the economy and the demand for space, adds Costello.

Those metros that were hit hard when the housing bubble burst lost more value than other markets and were slower to start their recovery. “So not only have they been digging out of a deeper hole, they have been recovering for much less time than some of the other major metros,” says John Chang, first vice president, research services, at brokerage firm Marcus & Millichap.

In addition, there are a number of metros that have been experiencing a slower recovery due to local economic factors. Midwestern cities including Chicago, Indianapolis and Cleveland have been climbing out of the recession for the past several years, notes Chang. “But they have never had a big pop in their employment growth, and they are also struggling to keep their population in a lot of areas,” he says. The slower improvement in fundamentals has weighed on property values.

Those lagging markets represent both risk and reward for investors. Certainly, investors are treading carefully. Metros in recovery mode do offer a higher level of risk because of volatility and potential softness, especially if the broader economy weakens, says Chang. However, these markets also represent an opportunity to buy assets at more favorable pricing relative to some other areas where prices are now more than fully recovered. In addition, growth in some of these markets is starting to accelerate at this stage of the cycle, he adds. Florida, including markets such as Orlando and Tampa, currently has some of the highest employment growth in the country.

“Some locations in these markets will not regain the values that they had before,” says Eric Enloe, managing director of valuation and advisory services with real estate services firm JLL. Outlying areas in metros that were severely impacted by the housing crisis and don’t have employment drivers, for example, may not regain their prior pricing levels, at least in this cycle. Those markets that have been slower to rebound are creating selective opportunities for investors to buy properties with higher returns, but with slightly riskier profiles. “With pressure and stress in markets comes opportunity,” says Enloe.

Investors really need to “peel back the layers” to find opportunities, adds Enloe. They need to look at the economic drivers that have slowed recovery and growth in some markets, and also drill down into the specific dynamics within submarkets and property sectors, he says. Downtown Chicago’s office sector, for example, has a ton of activity and very aggressive pricing that is higher than it was in 2007. It is a different story in some of Chicago’s suburban office markets, where demand and pricing are lower, but this creates opportunities for value-add investors that are patient, says Enloe.

Even though prices aren’t at previous peak levels, investors are still active in those markets, because there is growth occurring, adds Costello. “Prices might not be where they were at that previous peak, but they are seeing price growth,” he says.