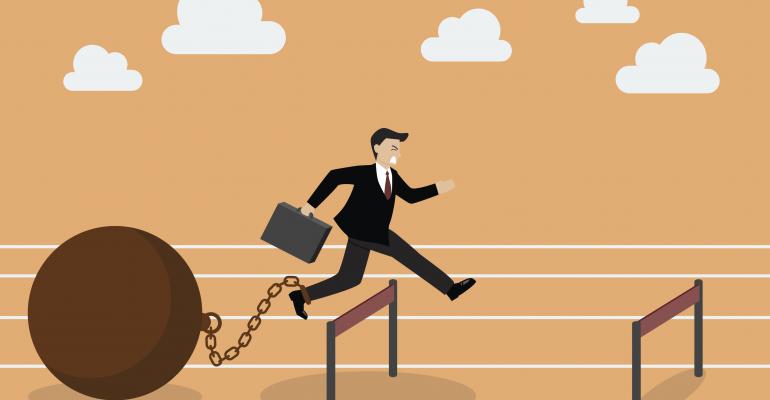 More Hurdles Ahead for Foreign Investors

Foreign investors have both the capital and the desire to continue buying U.S. real estate. The question is whether those forces will be strong enough to offset looming challenges ahead in the form of higher interest rates and a maturing real estate cycle, as well as a shifting geopolitical and regulatory environment.

After hitting a record high $98.9 billion in 2015, cross-border transaction volume dropped by one third last year, according to Real Capital Analytics (RCA), a New York City-based research firm. Yet that decline is more of a natural reset rather than a cause for alarm. “I do believe 2015 was an outlier year,” says Randy Giraldo, head of U.S. portfolio management for TH Real Estate, an operating division of TIAA Global Asset Management.

“I believe it’s a healthy moderation and a slight step down from what was an extraordinary year,” says Keith DeCoster, director of U.S. real estate analytics at Savills Studley. In 2015 there were more entity-level and massive portfolio transactions that boosted the overall dollar volume. “You could also say that 2015 was the year that the industrial sector became the darling of investors with an exceptional level of investment in the industrial sector,” he adds.

The bigger question is what lies ahead for 2017. “In terms of the money that people have raised for investment in North America for 2017 that is still at an all-time high,” says Revathi Greenwood, Americas head of investment research for real estate services firm CBRE. For example, North America-focused private equity funds closed in 2016 raised $53 billion. And currently there are 311 North America-focused funds in the market that are collectively targeting $104 billion in capital commitments, according to London-based research firm Preqin.

“We expect that the long-term trend for foreign investment into the United States is only going to increase,” says Spencer Levy, Americas head of research for CBRE. The U.S. has favorable economic growth, as well as greater liquidity and transparency related to other foreign markets. “I’m optimistic for stronger global capital flows this year,” he says. Yet one of the factors working against that in the near-term is a material increase in interest rates over the last few months that is putting pressure on cap rates and making the overall value of real estate less attractive than in some other countries, he adds.

It also remains to be seen whether tighter controls that the Chinese government has put in place will restrict capital from Chinese investors. “The other question from the U.S. side is how the new administration is going to review investments from overseas jurisdictions, including China,” says Greenwood.

Despite tighter regulations by the Chinese government aimed at limiting capital investment outside their home country, Chinese firms have emerged as a dominant player in the U.S. market in recent years. In fact, Chinese investors were the most active foreign capital group last year. Chinese firms accounted for about 24 percent of the cross-border investment in 2016, followed by Canadian firms at 19 percent, according to CBRE. Notable deals included Anbang Insurance Group’s $6.5 billion acquisition of Strategic Hotels & Resorts.

However, the Chinese government is continuing to tighten restrictions on outflows of capital that could hamper new investment. Specifically, the added controls make it a more arduous and lengthier process to move money out of their home country. A number of large Chinese corporations already hold a significant amount of capital and assets outside of China, which enables them to effectively bypass some of the government restrictions.

There are different groups that track Chinese investment into the U.S., in real estate and other business ventures, and right now there is a strong queue of pending deals, notes Greenwood. There is an estimated $21 billion in deals that are awaiting regulatory approval or financing, and another $7 billion in capital expenditures related to announced projects. “Those are in the pipeline, but what actually happens in 2017 depends on the regulatory and political climate on both sides,” says Greenwood.

Overall, foreign investors’ appetite to buy real estate in the U.S. remains solid. According to the annual survey by the Association of Foreign Investors in Real Estate (AFIRE) that was released in January, 95 percent of respondents said they plan to maintain or increase their investment in the U.S. in the coming year.

“From all of our different touch points across the globe we still see a very strong desire—and perhaps even an increased desire—to invest in the United States,” says Giraldo. TH Real Estate announced in January that it had entered into a new agreement with The Korean Teachers’ Credit Union to establish a new joint venture where both parties will contribute up to a combined $1 billion to invest in U.S. commercial real estate loans. The agreement expands upon an existing relationship, through which the two firms have invested over $950 million in U.S. commercial real estate debt since 2014.

Generally, foreign investors remain focused on gateway markets and core properties. The top five cities for foreign investors are New York, Los Angeles, Boston, Seattle and San Francisco. Noticeably absent is Washington, D.C., the first time the city did not make the list since the survey started in 1992, according to AFIRE.

In addition, more than half of survey respondents report plans to increase both value-added and opportunistic allocations in the coming year. Foreign investors are expanding their scope beyond gateway cities to include secondary markets such as Nashville, Ten.., Portland, Ore., Charlotte, N.C., San Antonio, Texas, Madison, Wis. and Pittsburgh, according to AFIRE. “There is increasing interest by foreign investors in some of those cities, but it would be misleading to draw conclusions about a structural allocation shift in that direction,” says Giraldo. Gateway cities are still capturing the majority of foreign dollars, he adds.

So far, foreign investors appear to be taking the new Trump administration in stride. “Part of what is fueling optimism in the U.S. equity markets since Donald Trump was elected is a belief in potentially greater inflation and economic growth that could trickle into real estate demand,” says Giraldo.

However, if the U.S. were to introduce substantive policy change and adopt an isolationist stance, that could potentially prompt foreign investors to hit the pause button or take a more wait-and-see approach as it relates to new U.S. real estate investment, adds DeCoster.