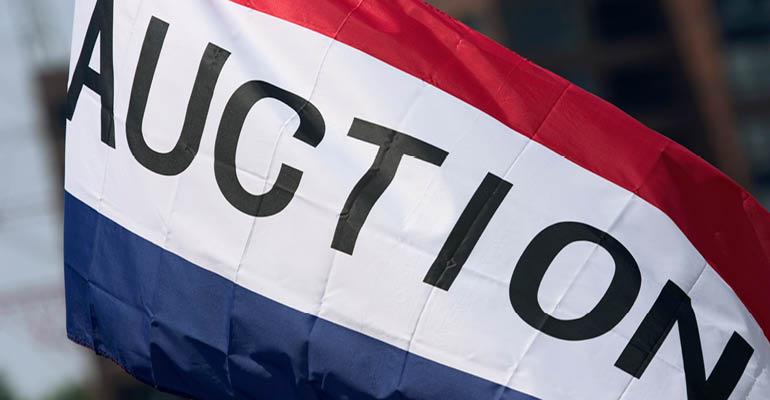 At Ten-X, one of the leading national auction firms, commercial real estate sales grew at a rate of about 20 percent last year with $3.1 billion in sales based on gross merchandise value. Much of that growth is coming from its expanding client base, notably business from institutional owners. When Ten-X first started selling commercial real estate assets about four years ago, the majority of its clients—about 65 to 70 percent—were banks. In 2016, that will likely flip to 30 percent banks and 70 percent non-bank clients, notes Gordon Smith, general manager of the Ten-X Commercial Real Estate Division.

Ten-X is continuing to focus on growing its auction basis. “More importantly, we are trying to address the rest of the market, which may or may not be familiar with the auction concept,” says Smith. Ten-X now has three products, including its Live Bid auction, a Managed Bid customized auction and its new Offer Select product that launched in March.

Offer Select takes the traditional, off-line sales process where people submit offers, call for last offers, select a winning bid, enter due diligence and finally move to the sale closing and brings it all online.

“What we are doing is providing a platform for people to transact much more efficiently,” says Smith. For example, its first Offer Select sale generated four back and forth offer and counter offers online between the buyer and seller within one hour. In a traditional process, that might have taken four days, he says.

Despite growth of auction platforms among both national and regional players, the vast majority of commercial real estate investment sales are still conducted via traditional, negotiated transactions. According to New York City-based research firm Real Capital Analytics (RCA), an estimated $543.2 billion in commercial properties valued at more than $5 million sold last year. Only a small fraction of those sales—likely less than 6 percent—transacted on auction platforms. However, even a share of that pie in the single digits represents a sizable amount of business, especially as there are only a handful of national auction firms that sell commercial real estate.

Auction houses are using a variety of strategies to fuel growth, ranging from new products and services to increased marketing and strategic broker alliances.

Williams & Williams sells all types of residential and commercial real estate properties. On the commercial side that includes everything from traditional office, retail and multifamily properties to specialized assets such as vineyards and golf courses. In the last 10 years, Williams & Williams has sold more than $10 billion in real estate across all 50 states, as well as Puerto Rico, Central America and Europe. And in February, Williams & Williams announced plans to expand into the Canadian market through a partnership with Ontario-based Real Estate Auction Canada.

At Williams & Williams, one of the strategies for growing its non-default commercial business has been focused on forming strategic broker alliances with major brokerages. “What we did was decide to fish where the fish are,” says Fitzwilson. Brokers that are referring properties retain a commission that is consistent with any co-broker transaction. The company also pays any buyer brokers that are involved in the transaction.

In particular, Williams & Williams formed a strategic alliance with JLL in December 2013. “It took a while for us to get in there and educate their brokers on what the advantages of an auction are,” says Fitzwilson. “Now what we are seeing is that relationship being taken to a new level.”

The firm is seeing a growing number of deals coming from JLL. Later this month, JLL and Williams & Williams are set to auction off more than 30 real estate assets owned by oilfield services giant Halliburton Corp.

“The key to auction is an aggressive marketing program, which is what we do well,” says Fitzwilson.

Williams & Williams also continues to send a team to the sale property on auction day for a live auction, while at the same time bringing in a live online audience to compete. So bidders have a choice to show up in person or register in advance and go online to bid in real time.

“Our data supports that we see a boost in high bids when we have a live and online simultaneous auction as compared to just selling using one or the other,” adds Fitzwilson. “We believe that the two of those things combined [are] very powerful."