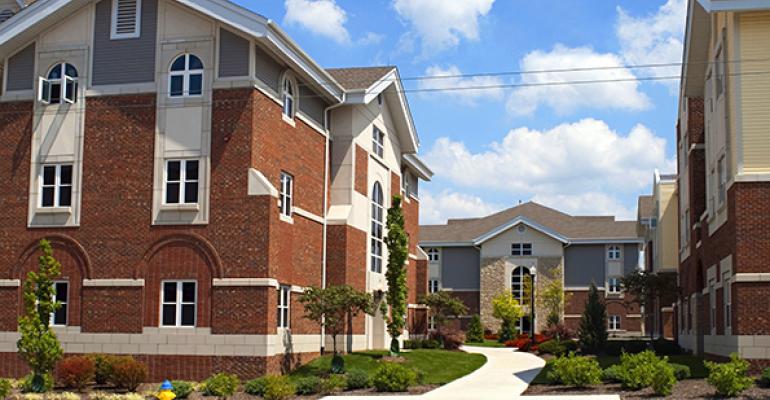 Student Housing Assets Are Worth More Closer to Campus

The price of student housing communities located next to campuses is high, even considering the higher rents that are usually prevalent at these properties. That’s because many investors consider the rents more likely to rise at such properties versus student housing communities located further away. (That doesn’t mean student housing properties further away are undesirable—such communities are often fully-occupied with students who can’t afford to pay for units in new high-rises next to their campus. They fill a powerful need, especially if their location adds some value other then proximity to campus.)

“There is still a lot of demand from the student body for assets that are more of a value proposition,” says Doug Opalka, senior managing director with financial intermediary HFF.

Not every community built next to campus is created equal—some are decades-old, others are new high-rise properties with top amenities. New buildings typically earn higher rents, but investors pay a similar cap rate for both new and old buildings near campus.

“There are different pools of buyers, but the cap rates are surprisingly close,” says Jaclyn Fitts, first vice president in the capital markets group of real estate services firm CBRE. That’s because the likely rent growth is similar for both.

Value away from campus

Cap rates for housing further away from campus range widely, depending on the particulars of each property and its location. A student housing community located a mile away from campus, but surrounded by a bustling downtown neighborhood filled with bars, grocery stores and restaurants is much more valuable to investors than a property far from amenities.

“If you are walkable to something, even if it’s not the university, it’s a more compelling story than a cornfield,” says Fitts.

The “Walk Score” of a community is especially important for assets located far from campus. (WalkScore.com rates locations on a 1 to 100 scale based on how long a walk they are from amenities.) That’s because residents choose these properties for their affordable rents, often hundreds of dollars less per month for a bed than the rents at student housing next to campus. The students who choose these communities do not have unlimited funds and may not own a car that would allow them to get the grocery store. Even if they do have cars, they may not have big budgets for gasoline.

These students usually need some other means of getting to campus and other services. If the university does not provide a shuttle bus, the student housing community may have to provide one. Depending on the culture of the school, bicycles, mass transit or even services like Zipcars may be important.