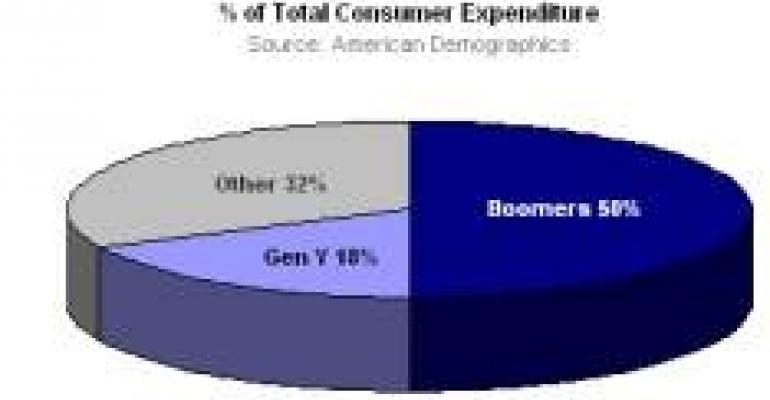 Generation X, which consists of 49 million people ages 28 to 39, is not at the top of most marketers' hit lists. Sandwiched between the larger baby boomer and Generation Y groups, Gen X just doesn't have the numbers to influence any major trends. Nonetheless, baby boomers are spending less as they age and Gen X is becoming the vanguard of the married-with-kids market who are reaching their peak income earning years. Our sister publication American Demographics compiled these compelling factoids about a generation caught in the middle.

Compared with other kinds of net-leased properties, the mean asking price for drugstores is 71 percent higher, according to a May 2004 report compiled by The Boulder Group. The report reveals the recent acquisition of Eckerd stores by CVS will result in a flood of net-leased drugstores on the market. Eckerd stores currently have a mean asking price of around $4 million and a mean cap rate of 8 percent.


PAY SCALE WHO SPENT HOW MUCH ON WHAT?

General Growth picks up Mall at Louisiana in Baton Rouge and 50% of Riverchase Galleria in Birmingham, Ala.

Related Cos. plans a 2008 opening for the 1 million-square-foot Gateway Center in the Bronx, N.Y.

Macerich completes Phase I of its redevelopment of Queens Center in New York.

$2.5 billion-Total value of net-leased drugstores on the market

30.24% Percent of available net-leased drugstores priced between $4 million and $4.9 million

$4.19 million Mean price of net-leased drugstores on the market

7.50% Mean cap rate of net-leased drugstores on the market

Sav-On Stores sell at the lowest cap rates, with a mean yield of 6.5%

62% OF GEN XERS ARE MARRIED

21 of Gen X men have never been married

Although the Denver market continues to expand in its population and size, it is getting close to being over-stored. Cherry Creek Mall really owned all of the better business prior to the arrival of the Park Meadows Shopping Center. Now the newer lifestyle center, Aspen Grove, will also begin to take some of these customers away. The growth at Flatiron Crossing slowed after a strong start. Downtown shopping business continues to increase in this market. For more on Denver, see our Market Profile beginning on page 42.

*(Some of the rankings given are estimates)