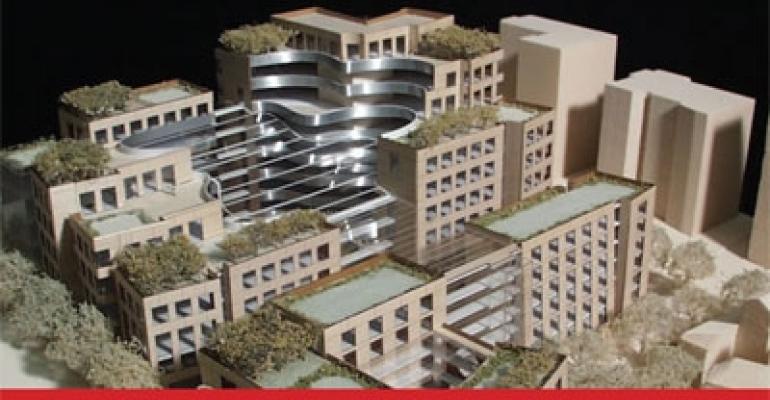 After years of neglect, Kansas City eyesore may finally become a jewel.

The development has been in limbo and exposed to weather for three years, and its proximity to the Country Club Plaza, a crown jewel shopping and office district, only magnifies the eyesore.

Van Tuyl’s VA West Properties acquired West Edge for $9.5 million in a bankruptcy auction in November and began enclosing the structure. “We are very optimistic about this project moving forward,” said Van Tuyl. “We are going to show patience, we are going to do it right.”

His return to the scene caps a yearslong saga. Van Tuyl sold the property to Kansas City advertising executive Bob Bernstein for $10 million in 2003. A cofounder of the Bernstein-Rein ad agency who lists inventing the McDonald’s Happy Meal among his accomplishments, Bernstein got city and neighborhood approvals to build a mixed-use project on the site. But after breaking ground in 2005, costs quickly escalated.

A dispute with general contractor J.E. Dunn Construction Co. halted construction in 2008. In 2009, Bernstein’s group filed for Chapter 11 after digging itself into a $120 million hole.

VA West now must decide whether to sink $50 million to $70 million more into the endeavor, says Michael White, a real estate attorney who represents VA West. Or, it could spend about $5 million to demolish all but a 960-space underground garage and wait for the next development cycle, he adds.

The decision hinges on the update of a $32 million tax increment financing agreement to pay for the garage, and on VA West’s ability to lure office tenants.

The 228,000 sq. ft., 10-story office structure was designed largely for Bernstein-Rein, which planned to occupy 120,000 sq. ft. It includes a large atrium that tenants view as a problem because of the divide it creates, says White.

The State of Kansas has been wooing Missouri firms with tax incentives, says Dan Lowe, a principal with Kansas City-based RED Development. His firm turned down the first chance to buy West Edge out of bankruptcy for $10 million because of its concern about completion costs and the ability to boost retail space.

J.P. Morgan Retirement Plan Services and KeyBank Real Estate Capital are moving 1,100 workers across the state line to the Sprint Nextel Campus in Overland Park for the tax benefits.

“Every tenant in Missouri with a lease coming up gets a package quoted from Kansas,” says Lowe. “It’s next to impossible not to move because dollars are going directly into the pockets of the business.” —Joe Gose

A Chicago-based private real estate joint venture has sold a singletenant, net-leased Citibank property near Wrigley Field in Chicago to a family partnership based in California. The sale price was $2.2 million. The 5,500 sq. ft. retail condominium, located on the first floor of a mid-rise building, is 100% leased to Citibank, according to The Boulder Group, an investment brokerage firm which represented the seller in the transaction.

Duke Realty Corp., based in Indianapolis, has closed on 43 of 56 properties recently acquired from Premier Commercial Realty. The 4.9 million sq. ft. portfolio, acquired for $450 million, consists of 51 bulk warehouse-distribution buildings and five office buildings. The acquisition increases Duke Realty’s holdings in South Florida to more than 7 million sq. ft., making it a top owner of industrial space in Broward and Palm Beach counties.