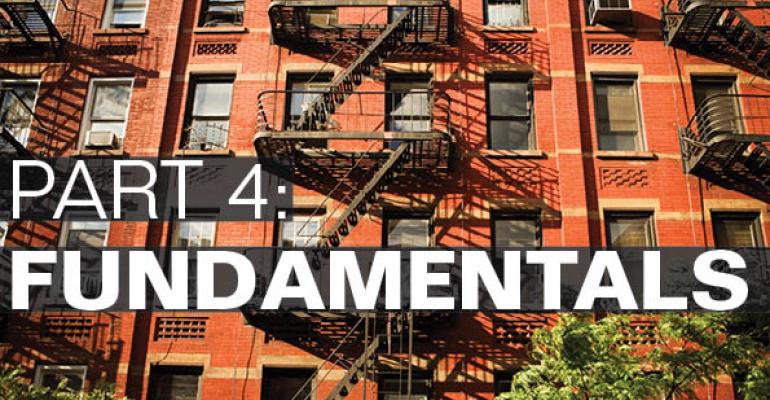 Nearly six out of 10 respondents anticipate that national apartment occupancies will increase over the next 12 months. Roughly 22 percent say they’ll decrease, and 20 percent expect no change.

As of February 2014, the occupancy rate was 94.3 percent, according to Axiometrics Inc. That represents a slight increase from January 2014.

The Marquette Companies’ portfolio is well above 94 percent occupied, according to Ryan. “Demand has allowed us to push rents,” he notes, adding that the company posted 7.1 percent NOI growth in 2013.

“When you look at the apartment segment, just look at the rent growth, rents are only about 5 percent nationally above prior peak, which occurred six years ago,” Naughton noted during AvalonBay’s recent earnings conference call. “And [in terms of] cumulative rent growth, this expansion—again, while [it’s] two-thirds of what we saw in the 2000s—is only about 20 percent of what we  experienced in the 1990s.” 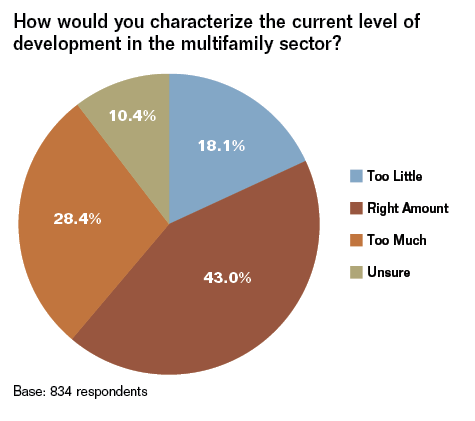 “With the extremely strong rent growth seen in 2010 and 2011 it was inevitable that it would begin to moderate, which has been the case now for about two years,” Jay Denton, vice president of research for Axiometrics. “By historical standards, however, the apartment market is still strong, especially in some coastal areas and regions of robust job growth, like Texas. We pointed out recently that oversupply could become a concern in some markets. Affordability could also be an issue with so many high-priced units coming to the market. The next few quarters will be telling as deliveries continue to increase.”

Metros in Florida, California and Texas continued as top performers for February. For the eighth consecutive month, Washington, D.C., ranked as one of the weakest MSAs with annual growth at –1.5 percent. However, Philadelphia and New York are not far behind with growth rates of –1.3 percent and –0.3 percent, respectively.

AvalonBay Communities, which has communities on both the East Coast and West Coast, reported rental increases of 3.7 during the first quarter 2014 compared to the previous year and 20 basis points sequentially over the prior quarter. Naughton said the REIT’s West Coast markets continue to lead with same-store rental revenue growth of roughly 4 percent in Southern California, 5 percent in Seattle and 8 percent in Northern California.

The Mid-Atlantic region also performed “modestly better than expected” with same-store growth relatively flat year-over-year and up 20 basis points sequentially. The D.C. Metro region is starting to benefit from a more stable, near-term outlook for the federal budget, which has reduced economic uncertainty and led to improved business confidence.

Brian Natwick, president of Crescent Communities’ multifamily group, believes rental rates will increase over the next 12 months, but he doesn’t think they’ll growth at the same feverish pace.

“We’ve seen year-over-year increases of more than 5 percent,” he says. “That’s above average, and I think we’ll revert back to average increases in the 3 percent range.”